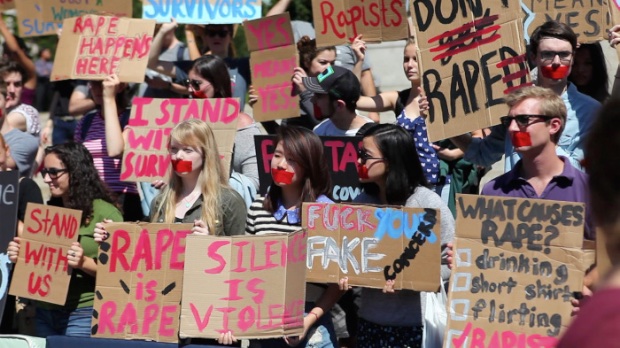 by Scott Macaulay
in Cinematographers, Filmmaking, Interviews
on Jan 23, 2015

Cinematographer Thaddeus Wadleigh and director Kirby Dick have previously collaborated on seminal and important non-fiction films that directed attention and effectuated change with regards to controversial social issues. Outrage in 2009 looked at gay politicians who vote anti-gay legislation. The Invisible War (2012) tore open the discussion of rape in the military. Their latest, The Hunting Ground, looks at the especially timely issue of campus rape and its coverup. In our interview below, Wadleigh — who is co-credited on this new film and on The Invisible War with Kristin Johnson — talks about the specific challenges of shooting a film featuring survivors of sexual trauma. The Hunting Ground has its world premiere Friday, January 23 at the Sundance Film Festival.

Wadleigh: I met Kirby Dick, the director of The Hunting Ground, on a Los Angeles Times commercial about five years ago. It was the first time I had worked with him, and at the end of our day I mentioned to him that I was capable of shooting without a 20 person crew, two ten tons worth of lighting and camera gear and craft service, and that documentaries were a passion of mine. He introduced me to his producer Amy Ziering and we have filmed several films since then, including The Invisible War, and Outraged. Our crew is small, so it’s imperative that we all know what needs to be done, and that we all work in unison to capture the moments that tell the story.

Wadleigh: It’s a bit counter intuitive… but my goal was not to have the cinematography stand out. We wanted the look to feel like it was an environment that belonged to the survivor, not something that felt manufactured. I use a lot of art direction in my framing composition, but the overall goal is to create something that feels natural. My intention was the same with the lighting, sort of a “naturally motivated luminance.” The composition and the lighting should not call attention to themselves. The important part of what was in the frame was the story being told.

Wadleigh: The biggest challenge to shooting a documentary is that you have virtually no crew and fewer tools to work with. You have to embrace the location that you are in, and find the inherent strengths of that location and then maximize on them. I find that it is a very creative process, one that requires you to be completely open to changing the shot that you thought you had in mind. We would often have one location for several subjects at one time. Finding a single location that we were able to craft several looks can be a challenge. There are technical challenges that are sometimes insurmountable on a documentary.. sometimes you just cannot tent in the street, so you adjust and change your plan. One note about our set is that the survivors in our film were all very young, and they were putting themselves in a very vulnerable position by allowing us to film them. It’s intimidating to walk on a set and see the lighting, the microphone, and the camera staring at you. It’s far more intimidating when your story is likely the worst thing that has ever happened to you in your entire life. So the tone on set was as important as what was brought to the look.

Wadleigh: The Hunting Ground was filmed with the Canon C300 serving as our A camera, and a Canon 5D Mark III serving as our B camera. I primarily used the Canon 85mm L series 1.2, and either the Canon 70-200mm L series 2.8 zoom, or the 135mm L series 2.0 prime. I love both the C300 and the 5D for different reasons, and let each camera play to its strengths for each shot. We decided on this combination for several technical and practical reasons that included Image Capability, Compatibility, Size, Weight, Sound Capability, and of course Cost will always play a role in these decisions.

Wadleigh: My approach to lighting on this film is summed up as “naturally motivated luminance.” It is a look that specifically does draw not undue attention to itself. I use large soft sources and rely on the location to guide me in placement. I always follow rules about where light should come from.. using the frame to steer the direction and intensity.

Wadleigh: We were shooting in Boston at a beautiful house near downtown. Our last subject was late which forced us to shoot into night, and the shot was meant to be towards a set of windows. It was our last location in the house as we had shot out all other possibilities. Lighting this scene with a small documentary kit posed a huge challenge. We ended up solving it by purchasing several 5600 balanced LED work lights which served as our illumination for our impromptu Day for Night shoot. Balancing the exterior with the interior was tricky with our small kit, but the shot turned out beautifully. This is a direct testament to Canon’s latitude and sensitivity to light.

Wadleigh: I enjoy working with both the C300 and the 5D Mark III for very different reasons. The 5D Mark III is certainly the camera that comes to mind when you think of the “baked in” look. However, using the custom functions, I have emulated a cine look for the 5D which gets close to the Custom Picture Profile that I have also created for the C300. The colorist knew going in that they would be timing two different images, but the tests we performed early on proved that we would be able to get the looks of the two cameras to not only match, but to compliment each other. I’m very happy with the work that Arc Design did for us.