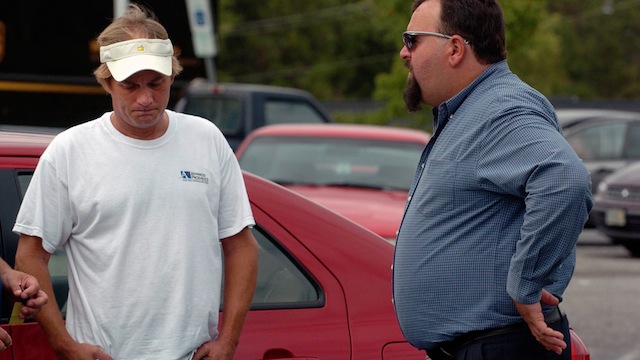 Premiering this past week at the Sundance Film Festival was Finders Keepers, the tale of an eccentric Southern feud pitting two social outsiders against each other for the possession of a severed foot. Here, cinematographer Adam Hobbs discusses the challenges of mixed camera formats, long days and natural lighting, and choosing to shoot with prime lenses.

Hobbs: In 2010 I was working in commercial production, A close friend told me about a strange leg documentary that Ed Cunningham (Executive Producer for Finders Keepers) had been working on for a few years. Ed was in North Carolina and looking for crew to help shoot some material for the project. After hearing the stranger than fiction story from Ed I was hooked and wanted to help, so we hit the road for a few days to push the project further along. Sadly, the project hit a wall after our shoot, but I kept in touch with Ed, checking in every so often asking about the status. I guess I just couldn’t believe a story this wild could be dead. Fortunately three years later I got a call from directors Bryan Carberry and Clay Tweel saying the project was moving forward. They’d been working with some of the footage I shot and asked me to come on board.

Hobbs: This is a unique story of loss, redemption, and hilarity and I wanted the photography to depict the characters in the most authentic way possible. I grew up in North Carolina where the story takes place, so the story is very close to me in a lot of ways. Subconsciously I was always thinking about not letting the photography of the film take away from the reality of the South. Directors Bryan and Clay had some clear references, and we both were on the same page about the feel and look we wanted for the film. I think my background in the South and being able to empathize with the characters really helped me to tell the story visually.

Hobbs: I’d say consistency in the look. Because the film was shot over the course of eight years many formats were used to tell the story. It was a challenge to keep things visually consistent over the entire production.

Hobbs: The majority of the film was shot on a RED Scarlet. We chose this camera system for its flexibility. Early exploratory footage was shot on a simple one-chip DV camera. We later had an HVX200, a Sony F3, and then the RED Scarlet, and finally some pickups on the C300. This is all mixed with archival and news footage. For lenses Bryan and I wanted to use our set of Zeiss ZF primes as much as possible. We typically would find ourselves using lenses in the wider range, somewhere between 16mm and 35mm. Most of our interviews were shot with the 35mm which quickly became our workhorse. Choosing to shoot with primes in this setting was difficult but I think restricting our focal length and limiting options created a reality that was really tasteful for the film. For the more verite material I would frequently throw a zoom on to ensure we got coverage that Bryan and Clay needed. In the end our camera and lens choices were motivated by the story and also the speed at which we were working.

Hobbs: Overall our approach to lighting in Finders Keepers is super minimal, and mostly we would only control things during the interview setups. Bryan and Clay wanted the flexibility to shoot interviews for long periods of time. Creating a setup that utilized natural light but would remain unchanged over the course of the interview was important. Often we would push a bigger source through a window to supplement the existing natural light. During shooting Bryan had a great approach to interviews; we would frame up on the characters environment first and then place our character into the frame. We would use this method whenever possible, and I feel it really helped capture the small town existence in which the characters of Finders Keepers live.

Hobbs: It’s difficult to pin down just one example. Shooting while Shannon and his mother showed off and tested their gun collection and pipe cannon comes to mind as being stressful however!