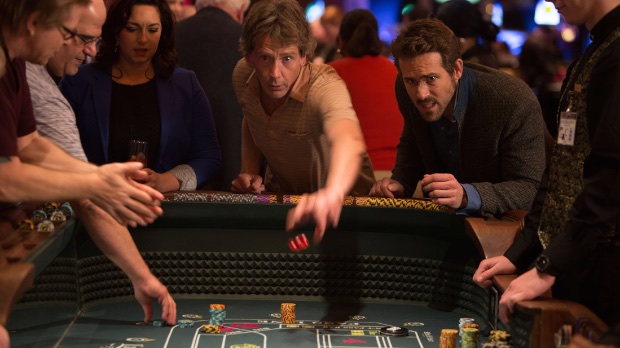 Appearing in Filmmaker‘s 25 New Faces list back in 2004 after their home run of a short, Gowanus, Brooklyn, Ryan Fleck and Anna Boden have had what, from the outside, looks like one of the steadiest careers in American independent film. While others from that list struggle to make their second or third films, Boden and Fleck have moved from feature to feature, first turning that short into a well-received debut starring Ryan Gosling (Half Nelson), essaying the life of an immigrant baseball player in Sugar for HBO; and then adapting Ned Vizzini’s acclaimed memoir It’s Kind of a Funny Story. If there’s been a longer than usual gap between Story, a production for a mini-major studio (Focus Features), and Grind, perhaps that has something to do with the “bigger movie” feel of the latter. A road trip gambling movie, it stars Ryan Reynolds, Ben Mendelsohn and, fresh off of American Sniper, Sienna Miller.

One of the bigger acquisition titles here at the Sundance Film Festival, it premieres this afternoon at the Eccles.

Filmmaker: As filmmakers, what appealed to you about the subject of gambling? And, did you draw on your experiences and emotions working in the risky world of independent film in writing this script?

Biden and Fleck: When we were filming Sugar in 2007, we spent a handful of our off days at the riverboat casinos in Iowa. We were enthralled by the people who inhabited this world and its specific energy, and, though we didn’t have an idea for a film about gambling back then, those locations definitely stuck with us. We wouldn’t describe Mississippi Grind as a “gambling film.” It’s more about the journey and the friendship. But we loved using the texture and stakes of that world as a backdrop to explore these two characters as they struggle with manhood and adult relationships.

Filmmaker: Directorial duos are still relatively rare in the world of filmmaking. How does yours work, and how has it changed, if at all, over the course of the films you’d done together?

Boden and Fleck: After 15 years of collaborating, we hardly ever throw things at each other anymore. In the early days of our partnership we had to navigate a lot of issues concerning trust and ego. Nowadays, those issues are almost entirely gone. Having a creative partner who you can wholly trust is a wonderful asset.

Filmmaker: Similarly, you’ve worked with the same d.p., Andrij Parekh, for all of your features. How has your work with him changed as you’ve both gained more experience together and as camera technology has changed?

Boden and Fleck: Andrij is our third man. We’ve developed a very special shorthand between us over the ten years we’ve worked together. He is a friend and partner who is absolutely key to our process. And he gets lots more practice between our films than we do. So it has been a real gift to have him gain experience working with new toys and formats and directors and budgets, then bring all that experience back to our collaboration together. We’ve been lucky enough to shoot all our movies on film so far, so changing technology hasn’t affected us as dramatically as it otherwise might.

Filmmaker: How were you able to make the game of poker cinematically exciting?

Boden and Fleck: We focused less on the cards and more on the players. We tried to fill every poker table with real players and interesting faces. We were more excited by what was going on with our characters underneath the game than what was happening on the surface.

Filmmaker: You are both former 25 New Faces and your first film was a Filmmaker cover. Not everyone from that year’s list has managed to navigate the world of Hollywood as successfully as you have. What advice do you have for someone who has made a small, independently produced film, as Half Nelson was, and who wants to develop further work within the Hollywood system?

Boden and Fleck: If you make a first feature that people respond to, you are going to have a lot of very interesting actors, producers, studios asking what you want to do next. Tell them you want to make a Spanish language, sports drama with no recognizable actors and an emotionally ambiguous ending. Or maybe best to ask someone else about this one!