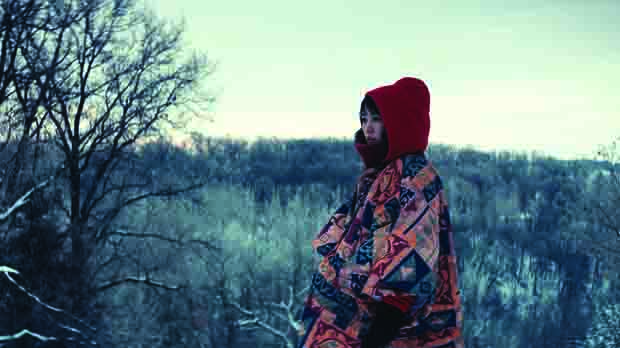 Rinko Kikuchi in Kumiko, the Treasure Hunter (Photo by Sean Porter/Courtesy of Amplify)

Filmmaker‘s Winter issue is now arriving in mailboxes, newsstands, and is online for subscribers. I’m very happy to have as our cover story my favorite film from Sundance ’14, the Zellner Bros’ beautifully surreal fable for the internet age, Kumiko, the Treasure Hunter. It arrives in theaters in just a few weeks, and in my spoiler-free interview you’ll read about David and Nathan Zellner’s love of ’80s adventure films, their diligent approach to sound design, and stealing shots on the Tokyo subway. And don’t miss the companion article by the film’s d.p., Sean Porter, who impressively and personally talks about five things cinematographers don’t talk about.

Elsewhere, I’m thrilled to have back in our pages producer, screenwriter and, now director, James Schamus with the text of his provocative speech to the German Film Academy, “23 Fragments on the Future of Cinema.” Adorno, Kracauer, Nolan, Melies and others make appearances in a piece that is a rhetorical high-wire act mixing business analysis with psychoanalysis, film theory and Socratic questioning. (As some of you will be heading to Sundance tomorrow, we’ve unlocked it from our paywall for your airline reading.)

Also online now is filmmaker Elisabeth Subrin’s interview with Jill Soloway, fresh off her Golden Globes win, about her Amazon webseries Transparent. It’s a fascinating conversation; Soloway’s manner of talking about her creative process is unlike anyone else I’ve heard or read. And, as always, we post immediately Lance Weiler’s “Culture Hacker” column, which this issue looks at Miranda July’s Somebody app and a very cool social wake up service called Wake Me Up. And, finally, you can read now Zeba Blay’s discussion with Ryan Coogler and others from the Black Out for Human Rights activist group.

I’ve been doing Filmmaker for, um, 22 years, and I’m still amazed when we print an article about a perfectly obvious and necessary topic that we’ve never actually covered before. This issue that piece is “The Seven Arts of Working in Film,” by production designer Brandon Tonner-Connolly. About on-set etiquette and professionalism, this is, simply, a must-read piece if you are just entering the film business. If you are able to act on it, the advice contained here will help you go far in your career.

There’s a lot of other great stuff in the issue. Sarah Salovaara interviews Carlos Marques-Marcet about his Skype relationship picture 10,000 KM and particularly drills down into the production of that film’s 23-minute opening shot. Filmmaker Jim Hemphill talks with veteran director Ron Howard about his forthcoming sea-set drama, In the Heart of the Sea. Among other things, they discuss how Howard’s model has changed over the years and working with the great d.p. Anthony Dod Mantle. Filmmaker Alix Lambert met with director Lisandro Alonso throughout his recent residency at the Film Society of Lincoln Center and reports on the methods of his dreamy “contemplative cinema.” And I talk with Wim Wenders and Juliano Salgado about their doc, Salt of the Earth.

Of course, there’s more, including a brand new column on the semiotics of film editing in the digital age by Nicholas Rombes and Anthony Kaufman’s annual deep dive into the distribution of last year’s Sundance crop. Check out the full table of contents here, and if you’d like to subscribe — which will get you the next print issue but unlock our paywall so you can read the current issue online — click here.