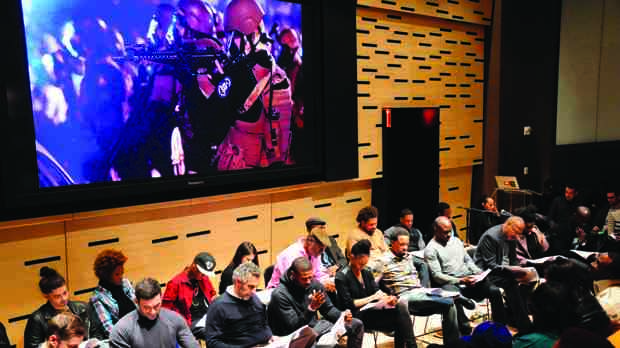 For several weeks at the end of last year, it seemed as though the racial tension building in the United States might reach a boiling point. The deaths of Michael Brown, Eric Garner and Tamir Rice at the hands of law enforcement had produced an energy of outrage and frustration, sparking heated national debate. It was a debate that didn’t hinge on whether or not America had a race problem, but how bad America’s race problem actually was.

For some, the deaths of Brown, Garner, Rice and others were proof that there was a systematic, inherent disregard for black lives in the U.S. The assertion seemed cemented when, just weeks apart, grand juries in Ferguson and New York City voted for no indictment in the cases of Brown and Garner, respectively. Suddenly, the situation seemed dire. Hashtags such as #BlackLivesMatter began trending, while marches and protests against police brutality erupted in cities across the country.

Only days after the decision in the Garner case was handed down, online fliers began spreading across social media platforms from a group called Blackout For Human Rights. The group, along with several others, was calling for a retail boycott following Thanksgiving, using the hashtag #BlackoutBlackFriday. For Black Friday, rather than patronizing big businesses, consumers were urged to engage in a day of activism instead of shopping.

Headed by Fruitvale Station director Ryan Coogler, the group organized special events on both coasts for the nationwide boycott. In Los Angeles, Ava DuVernay hosted a day of black interest screenings (including her second narrative feature, Middle of Nowhere), where the price of admission was a food donation. In New York City, Coogler and Newlyweeds director Shaka King held an intimate live reading of Spike Lee’s Do the Right Thing screenplay.

The reading was quickly planned, with Coogler securing Lee’s blessing and a theater venue at Lincoln Center just a few days before Black Friday. With King helping to produce the event, he was able to recruit John Turturro, Fruitvale Station stars Michael B. Jordan and Melonie Diaz and a dozen other actors to participate. Hundreds of New Yorkers turned up for the reading, which had been promoted chiefly through social media, with the theater proving to be too small to accommodate everyone in a line that snaked around the building.

“The energy shifted a lot,” remembers actress Trae Harris, a star of Newlyweeds who also took part in the reading.

“It began with this excitement, some laughter. But then there was imagery being projected on the back wall, images from Ferguson juxtaposed with images from Do the Right Thing … and suddenly you could feel a really heavy silence that coated the room. Emotions were all over the place, and in that way I think it was a success.”

Whether the Blackout boycott itself was a success is still hazy — Black Friday sales dipped by 11% on the day, a victory for many in the movement, though there’s no quantifiable way to prove the lower spending was in fact triggered by the protest. And yet, the reading and the screenings in L.A. put Blackout for Human Rights on people’s radars in a major way. Here was what seemed like the first real display of filmmakers, in particular, actively protesting police brutality outside the realm of tweets and reblogs. Coogler’s recruitment of high-profile friends, including not only black actors and filmmakers such King, DuVernay, Spike Lee, Terence Nance and Jesse Williams, but also white allies in Hollywood including Joseph Gordon-Levitt and producer Scott Budnick, was undeniably key to the attention.

And while the director has become the face of the organization, he’s eager to downplay his own importance in the movement. The former juvenile detention center counselor explains that Blackout began organically, gradually, a reaction not only to the Trayvon Martin case but several other stories of police brutality in the news.

“I didn’t start this on my own,” he says. “It was me and a group of people that I knew both in and outside of the film industry. Artists, yes, but also community organizers, human rights activists, parents. It’s a real diverse group of folks. At first, we were just having conversations, and in September of 2013, we started to really organize.”

What may have began as just Coogler and a small group of activists and concerned citizens has now, a year later, blossomed into a network with thousands upon thousands of members across the world. It’s an amorphous, constantly changing group — one that relies on the talents and resources of its individual members to spread awareness and effect change. Naturally, Coogler called on friends in the film industry to not only shed light on the group, but also contribute to it in tangible ways.

At the behest of Coogler, Shaka King started producing online content for the Blackout movement, videos highlighting the realities of police brutality, including one that featured an exclusive interview with Eric Garner’s daughter, Emerald, lamenting the fact that she will never be able to buy another Christmas present for her father again. Another video effectively juxtaposed brutal footage of police violence with Christmas music. The message: Who has time for shopping when people are dying?

“When Ryan asked me to be part of this movement, to essentially make propaganda videos for the movement, I thought ‘Oh, I can do that. I’m really great at that!’” King explains of his involvement in Blackout.

“It gives me some satisfaction, because otherwise I just walk around with the pure rage I have as a black man on a daily basis, and I get to do something with it.”

Coogler is quick to point out that the movement isn’t just about race, however, but more specifically human rights. “Our goal isn’t to just have a conversation about race in America. Our goal is to bring an end to human rights abuses by public servants.” For him, the goal of the group is to de-racialize the conversations around deaths like those of Mike Brown and Eric Garner and to address issues that go beyond police brutality and beyond race.

“That being said,” the 28-year-old filmmaker adds, “if you look at the statistics, the type of people who have their human rights violated by police officers tend to look a certain way and come from certain communities. We have to address that, too.”

Art and protest have often gone hand in hand, but questions of the effectiveness of protest through art and from artists usually appears alongside as well. When Coogler talks about Blackout for Human Rights, however, he sounds convincingly hopeful about the kind of progress the network can make. The buzz around the Black Friday events may have died down, but the director and his peers are already planning various actions surrounding key dates in the coming year, including special screening events for Martin Luther King Day.

“So next, we’re planning legislative content for bills against [police brutality] in New York, in St. Louis, in Cleveland … Ultimately the idea is to inspire non-filmmakers to create their own videos.”

When asked about how feasible it is to sustain grassroots activism and protest alongside filmmaking, Coogler doesn’t seem daunted. The director, gearing up for his second feature, Creed, sees it as a kind of personal duty to keep Blackout for Human Rights a priority.