Rotterdam at 44, Volume #2: Yanks in Holland, Suicidal Poets & the limits of J-Horror 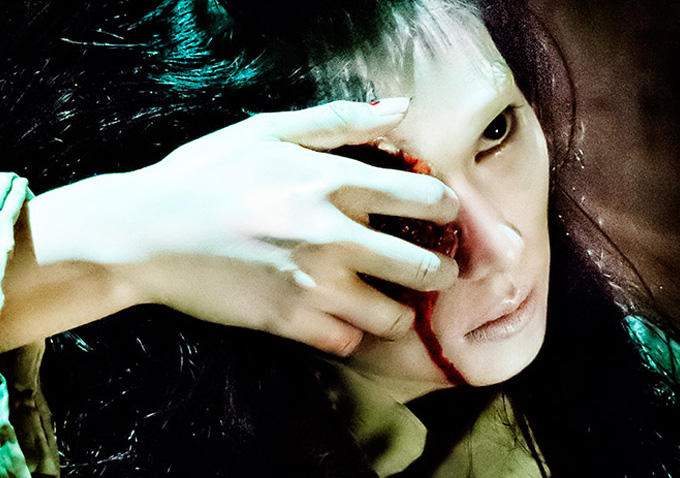 Over My Dead Body

The program of American narratives assembled in Rotterdam by Ralph McKay and Inge De Leeuw includes a smattering of world premieres and, for the first time in a while, no films making their international debuts after bows at Sundance. (The latter likely due to the first-time collision of dates between the two festivals.) There is a consistency to the loose narratives in a lot of the work. We get by turns somber and cluttered ensemble pieces with light running times, generously adorned with micro-indie actors whose faces will be familiar to the ever-shrinking flotilla of scenesters who follow such films, ones that in this case prove but fragments of an experience that is clearly personal but not fully articulated by the director. Be they set in Greenpoint, Brooklyn (Matthew Yeager’s unconscious satire of a “tune in, drop out, ye wayward hipster,” Valediction) or Kalispell, Montana (Britni West’s hopeful Big West portrait of a community, Tired Moonlight), the films tend to avoid hitching themselves to people with defined goals or urgent desires unfulfilled.

Yeager’s film opens with Dakota Goldhor’s character quite believably being more interested in her dope dealer’s new pot strains than her boyfriend’s confusing (and confused) alienation. I don’t necessarily blame her given what we do (or rather, don’t) learn about her boyfriend over the rest of the movie’s slender running time but regardless, drug addiction is a persistent theme in McKay and De Leeuw’s program. Nathan Silver’s Passaic, New Jersey set Stinking Heaven, a cleverly shot 1990 period piece, centers on the goings on at a group home for oddball addicts. It shares several essential creative voices with West’s Montana-set film (both cinematographer Adam Ginsburg and composer Paul Grimstad do double duty) and a taste for wandering ensemble narrative, if not much in terms of visual sensibility. While Ginsburg shot Moonlight on 16mm that flatters the prairie locations while providing the textures that only film can still give us, Heaven was composed with period appropriate video cameras and nice, old long lenses to give it one of the most distinctive looks of any recent American indie since Andrew Bujalski’s Computer Chess. Drawing strong work out of his entire cast, is the best yet of Silver’s consistently promising and uneven five features thus far.

There isn’t a single film among the bunch that seems to have anything resembling a plot, even among the best work, such as Josh and Bennie Safdie’s Heaven Knows What. The universally lauded Venice and Toronto holdover is another addiction drama, albeit staring real addicts in material based loosely on female lead Arielle Holmes’ unpublished memoir. The film proves to be the duo’s most satisfying and melancholy narrative outing to date. Working closely with Frownland collaborators Ronnie Bronstein (co-editor and co-writer) and Sean Price Williams (DP), this by turns tender and unforgiving portrait, a convincing and emotionally resonant descent into the withering stasis that is dope-fiend-dom, recalls both that earlier landmark indie and Larry Clark’s Kids.

Perhaps among these most uncommercial, often meandering bunch of films, Garrett Bradley’s featurette-length Cover Me, part of this festival’s new program of mid-length movies that typically struggle so hard to get programmed anywhere else, was also the most surprisingly buoyant emotional experience among McKay and De Leeuw’s selection. The New Orleans-based director’s first film, the unfocused (guilty of all the alleged sins listed about) but gauzily handsome Below Dreams, acquired some admirers at last year’s Tribeca Film Festival. She is back less than a year later with a film that eschews narrative altogether and in the process allows the director the engage in moments of relatively thrilling, free-associative street reportage. Filmed in some of New Orleans’ more colorful corners, these scenes are intercut with the travails of an emotionally turbulent black songstress (Tameka Morris), whose creative process the movie explores in a series of long, beautifully-constructed sequences. The score, mostly of Morris’ singing’ but one or two lines of the same remarkably melody, is dreamy and evocative, and as the movie starts to pile on self-conscious aesthetic elements (slate claps, Bradley directing one of her actors on camera before the take begins, etc) it never loses its alluring curiosity and warmth. Made as a project between filmmaker and star for the international arts biennial, it’s the type of hard-to-categorize film that doesn’t easily fit into the niches so much international cinema must in order to get recognized. That doesn’t make it any less of an intriguing experience.

I haven’t consciously gone out of my way to watch movies about real-life poets on singular, suicidal quests in Rotterdam. They just seem to find me. One I sort of stumbled into half awake, still the victim of jetlag and another long night on the icy cobblestone streets here, already behind on another jam-packed day of moviegoing, genuinely scattered and just hoping to discover some place where I could get something that resembled decent, restorative food. After a subdued first full day of the festival, the crowds finally arrived in full force on Friday at Rotterdam, people leaving the long ticket queues at the main box office with looks of disappointment, old and young, ruddy faced or grimly grinning, their hopes dashed by another sellout, be it of of the new Roy Andersson or some young unknown from Laos. It was finally as it should be after a drowsy start.

Cypriot director Kyros Papavassiliou ‘s Impression of a Drowned Man, screening here in the Tiger Awards competition, and Austrian Jessica Hausner’s Amour Fou, a darling at Cannes last year that recently opened the Museum of Moving Image’s First Look series, might both feature gun-wielding men of letters, but neither gives up the mysteries in their heart easily. Amour Fou is as painterly and strange as I had been led to believe; Every frame looks like a it could have been ripped from an coffee table-book of paintings from the period, lit and designed within an inch of their life, while the characters’ emotional tenor is stripped down to near Hal Hartley-ian levels of abstract coolness. Its telling of the curious case of Heinrich von Kleist, a German scribe knee deep in the Romantic era who killed himself in a suicide pact with the terminally ill noblewoman Henriette Vogel, is a lugubrious but involving ride. Shot on a smattering of immaculately designed period sets, its style is as mannered and tonally off-kilter as its subject matter is, at first glance, rife with tragedy. In Hausner’s telling the story is not without ironic humor, however, and despite the cloistered environment of the characters and intimacy of the production, the movie looks outward at the larger goings on of the Romantic period with a keen eye.

A late, post-suicide twist leaves the certainly of Henriette’s actual pre-suicide prognosis in doubt and offers her husband, a lordly squire with a progressive bent, the chance for a herculean moment of emotional intelligence concerning his wife’s conscience and his own feelings about her choice of deathly companionship. While the coming tremors of suffrage, land ownership and democracy are just starting to shake Europe’s largely feudal order, shoved neatly and thoughtfully in the background, the movie manages to become simultaneously a work of aesthetic, moral and intellectual heft. I can’t quite say the same about the other suicidal poet movie, Kyros Papavassiliou’s sumptuous magic realist whatisit!?, Impressions of a Drowned Man. Kostas Karyotakis was a prominent Greek existentialist poet who killed himself in 1928 at the age of 32. He was just a year older than von Kleist when he met his demise. Papavassiliou isn’t interested in telling Karyotakis’ story per se, using the spectre of the poet and his work as a launching board for a film whose elevator pitch would resemble something along the lines of “Groundhog Day meets Last Year at Marienbad.”

In Papavissiliou’s film, Karyotakis emerges from the sea, not knowing who he is or where he’s come from, in the here and now. In a modest and increasingly strange set of encounters, he begins to gain clues as to his identity and what his purpose might be. It seems, in this otherworldly but still relatively shellshocked by current events version of Cyprus, that the dead come back to life, only to disappear again, with some regularity. They have sex with women, they stab people, they visit their impossibly young parents. The narrative parts of the story are broken up by interludes that include bits of Karyotakis’ set against images of rural Cyprus, but the selection doesn’t give one much clue as to how the film is meant to be read. We get the sense that Karyotakis is going to come to terms and, well, re-administer his own death in shots that at their most bravura recall moments from the work of European masters like Marco Ferreri and Michaelangelo Antonioni, but ultimately the movie’s intentions remain too out of reach for it to coalesce into a very meaningful whole. Its obscurantist sensibility feels like, in many respects, a Rotterdam calling card.

Later that night I caught the first of two Takashi Miike films here, Over My Dead Body, on the biggest screen the festival has to offer, the Pathe #1, in a crowd that was advertised as being sold out but that must have been a least a third empty. The film, which opened last August in Miike’s native Japan before taking its international bow at Toronto, is Miike in slow-burn terror mode. He’s done this sort of thing so well on enough occasions that one leaps at the chance to see him do it again, even when you know, walking into a dim cinema with a bunch of Dutch teenagers with the closest of them coughing voraciously all around you, that you’ve probably made the wrong choice. Miike is hit or miss, to say the least, and the offer was more off target than that Mets pre-game first pitch thrown by Fifty Cent.

I’ll admit, it was nice, after a day of seeing movies that were directed so as to confront the viewer with a disjunctive relationship between form and narrative to watch a director using classical technique with as many tricks as Miike has in his bag. This man has 97 directing credits on IMDb, the broad majority of them feature films beginning with 1995’s Shinjuku kuroshakai: Chaina mafia senso. He knows how to move a camera, ever so slightly, for psychological impact, and he’s the reigning world champion of spine-tingling gore special effects. Which it is why it is all the more disappointing when a director capable of a sublime multi-genre pastiche like Gozu or a modern classic like Audition engages in rote, by-the-numbers storytelling. In Over my Dead Body, you might not see all the punches coming, but they’re too slow and telegraphed to hit you in the face or the gut. The love triangle that goes horribly, horribly wrong, set against the backstage drama of tech rehearsals for a play in which all three primary characters are performers, remains flat; the older, leading lady being diddled on by her co-star/boyfriend with her younger understudy isn’t the most original story concept perhaps, but the bigger failing is that no one’s heart, be it Miike or performers Ibizo Ichikawa, Miho Nakanishi or Ko Shibasaki, seems particularly in it. Miike doesn’t surprise you much with his hard cuts out of brief, gruesome dream sequences, or his creepy dolls that suddenly start shedding tears . J-Horror has never felt so played in its most trusted and celebrated practictioner’s hands. A pity indeed.

UPDATE: This article was corrected after posting to note that director Kyros Papavassiliou is technically Cypriot, as he was born in Cyprus. The director grew up in Greece. Also, the film was shot largely in Cyprus.