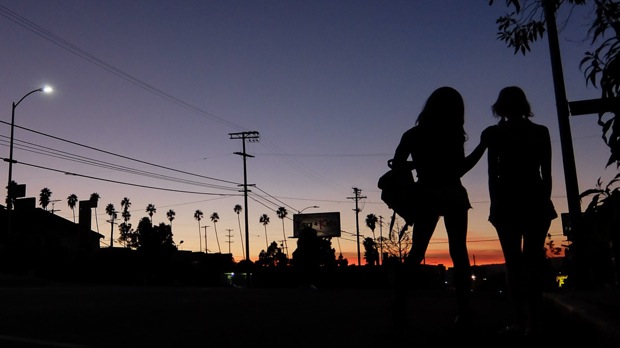 Sin-Dee (Kiki Kitana Rodriguez) sits on one side of a donut shop booth, her best friend Alexandra (Mya Taylor) on the other. The camera’s on the table, restricted to shot-countershot looking up, with large windows setting both in sharp urban relief against different halves of a large L.A. intersection. With rapid cutting back and forth reminiscent of the dashboard cams in Kiarostami’s 10, Tangerine‘s opening is both intimate and epic, and it’s exciting to see all this space so clearly laid out behind the two. There’s a micro story being established and simultaneously the introduction of a landscape to be explored: an instant attention-getter director Sean Baker follows through on.

Sin-Dee discovers — via an (inadvertently?) dropped prompt from Alexandra in this quasi-expositional sequence — that pimp boyfriend Chester (James Ransone) was cheating on her during her just-completed 28-day jail stint. That sets Sin-Dee off on a furious cross-city trek to track down the lady and confront her man. Exasperated by the drama and preparing for an evening nightclub gig, Alexandra splits; the movie divides its attention threefold, between the two’s separating/converging trajectories and regular customer Razmik (Karren Karagulian), a closeted Armenian taxi driver whose traditional home life provides repressive counterpoint to the lively streets. This journey-into-the-night structure is potentially the stuff of farce — energetic commuting across Hollywood punctuated by regular character intersections, building to a hysterical head — but not quite: Sin-Dee and Alexandra are trans women sex workers, and both parts of that equation automatically mean their lives, or at least their dignity, are never out of some kind of danger.

This is something you forget about over the course of the film, which only reminds you of it once. Tangerine unostentatiously celebrates fluidity, community, support and is generally quite hearteningly right-on, casual crystal meth use and all; it’s all the better for not trying to ennoble the characters. The film doesn’t feel “researched” in any way: thanks to its (first-time performers) leading duo’s extensive insight into home turf, it has the intangible air of someone navigating terrain they understand viscerally rather than notes taken by a bewildered outsider and shoehorned into a plot.

While not underthought, the plot is more of an excuse for endless asides and tossoffs (“That black boy on the skateboard…they all think they’re Lil’ Wayne”). Tangerine starts and stops scenes only as long as they’re funny, and it has the enjoyably amoral hanging-out energy of something like California Split maximized for constant frenetic activity, grounded by a plethora of L.A.’s dispossesed and marginalized who are clearly real street faces rather than implausibly grimed-up actors. Complementing its verbal, atmospheric and incidental hyperactivity, Tangerine is given a considerable/unexpected boost by being shot on the iPhone 5S. There’s a carwash blowjob scene where the backseat camera is hypnotized by the colors of moving brushes and fluctuating water patterns on the front window: a rare moment of unbusy, lightly abstracted lyricism whose slightly undercranked nature makes great use of the iPhone’s familiar capacities. (It’s also a great, hysterically sly stand-in for the unseen transaction in the front seat: first comes the coating and spurting, then the cleanup.) Los Angeles pops at both heated day and neon night while avoiding visual cliche, and the tiny camera constantly travels with amazing rapidity ahead, behind and alongside its rapidly striding characters, even game for an ad hoc crane shot. In short: great fun, both visually and verbally.

Craig Zobel’s last two features (Great World of Sound and Compliance) presented scenarios in which exploited American workers exploit those even lower on the chain. The opening scenes of Z For Zachariah — abandoned industrial buildings, classrooms with stacked desks — suggest something of a world finally sucked dry and abandoned by corporate greed, but the culprit this time is some sort of nuclear incident, which has left much of the land radiation-strewn and uninhabitable.

Ann (Margot Robbie) lives alone on a farm with her dog, scavenging the city for usable materials in her radiation suit, then returning to her mercifully uncontaminated valley. Devout and lonely, Ann’s solitary existence is complicated by the arrival of Loomis (Chiwetel Ejiofor), an unexpected survivor. He bathes in radiated water, she nurses him back to health, and soon they’ve entered into a sexless, pre-lapsarian/post-apocalypse lifestyle. In the absence of other partner options, the entrance of sexuality seems (at least narratively) inevitable, until the arrival of Caleb (Chris Pine) sets up the triangle. (Opinions will vary on said inevitability; I’ve had a few conversations with people who find this regressively heteronormative.) Very little of this has anything to do with the sci-fi scenario (there are no visible f/x), which seems more like an excuse to confine three people to one location without potential interruption.

Loomis is an atheist, Caleb at least claims to have been raised with faith, and the love triangle acts as a quick referendum on spiritual/secular divides in America: blunt and not particularly insightful on that score, but timely and aggrieved. More interesting is an early, no-fuss kiss between Ann and Loomis. Denzel Washington quashed the idea of an interracial kiss with Julia Roberts in The Pelican Brief some 23 years ago, and for a while it seems that the elimination of literally everyone else on the planet might have at least brought about that much-touted, never-dawning “post-racial” landscape. When Caleb arrives and draws Ann’s unsubtle gaze, Loomis gives her permission to go to him in blunt terms confirming nothing’s changed: “You all be white people together. It’s fine.”

This sharp undermining of a previously unspoken dynamic is one of the many things Z For Zachariah does right. Abetted by DP Tim Orr, Zobel can offer up well-framed pastoral landscapes by the score, and he works to introduce tension at an unexpected moment’s notice. When Loomis and Caleb go turkey hunting, the latter’s behind, and the camera’s just off-axis enough to make it unclear whether he’s aiming at animal or man. Often similarly sharp and sudden in introducing or upending established dynamics, Zachariah‘s undone by a classic sci-fi problem: the premise may be neat, but moment-to-moment execution is comparatively underwhelming. A scene where the trio dive into a lake visually resembles nothing so much as the Wild Things poster where Denise Richards and Neve Campbell rear up ominously from the water; a close-up of Pine, sultry and glowing in the moonlight, drew brief derisive laughter.

Pine himself is completely fine but saddled with a uselessly distracting Southern accent. Is this part of the racial subtext vis-a-vis Loomis, who says that for a long time after the accident he feared traveling south? Quite possibly, but saddling an established player with an accent that’s inherently more-than-usual prone to caricature is a bad idea. Dialogue is variable (the script is Nissar Modi’s rather than Zobel’s) and regrettably unafraid of the clunky and generic (“I don’t know how any of this happened”), Heather McIntosh’s score reinforces every obvious emotion in hacky fashion, and there’s a bad sex scene to boot. The religious, racial and love triangle strands remain seemingly unblendandable, their ability to bind in any case undone by such routine clunkinesses.

Predictably rough going, Frida and Lasse Barkfors’ Pervert Park focuses on the residents of Florida Justice Transitions. In this St. Petersburg trailer park community, 120 registered sex offenders live, communing in group therapy sessions and providing support for each other. The Barkfors’ structure is straightforward and not terribly satisfying: a few offenders are highlighted, their direct-to-camera recitations — of general life story and specifically what crime they committed, complete with unelided teary breakdowns — either filmed head-on or layered on top of scattered footage of the park’s not unpredictable day-to-day: making tea, holding group BBQs, routine building maintenance, et al. When no interaction can pass without some kind of verbal reminder of who we’re watching, an opportunity to get texturally immersed, unmediated, in park life is missed: some real cognitive dissonance between the mundane and monstrous would’ve been more sharply thought-provoking.

This testimony (both to the camera and in group sessions) is, predictably, quite upsetting — stories of parental incest repeated from generation to generation, the abduction and rape of a five-year-old Mexican girl, et al. — and it was smart to make the film only 77 minutes long, though I couldn’t blame any of the numerous people who regardless walked out continuously throughout, seemingly unable to handle much more. Trailer park counselor Don Sweeney may set off alarm bells by beginning a sentence with “I don’t want to demonize the victim business but…” Nonetheless, both he and the film build a strong case beyond the obvious (that offenders aren’t inexplicable anomalies but themselves often victims or otherwise needing treatment): the legal system lets down victims, past and future, by failing to provide strong support or counseling for offenders, thereby increasing the risk of recidivism and more victims.

I believe pretty much anything angry and cynical posited about our carceral system, and one story — involving the online chat entrapment by law enforcement of a young man whose misdeed was confined to a screen rather than in-person actions — leads to the idea that this kind of prosecution has less to do with justice than feeding our horrifically profitable prison industry. Still, there’s only so far empathetically I can go with some of those presented onscreen; the ending suggestion that “We have to humanize ourselves, because we’re not humans to them” might as well be the movie’s agenda, and I found myself flinching away at the idea that 120 offenders are 120 potential “ambassadors” to the outside world. In harmony with this closing speech, Pervert Park succeeds in avoiding any truly unfathomable monstrousness, and I have no idea whether that’s a good thing.