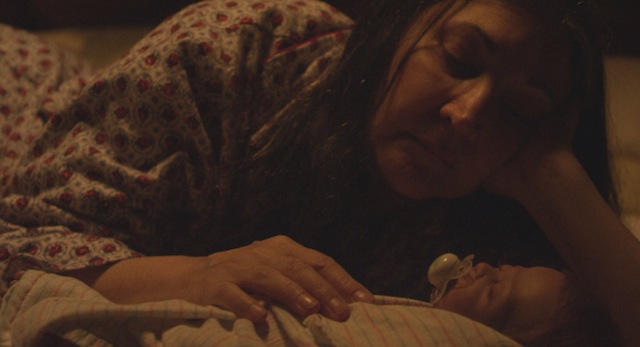 There are two worthwhile concepts that skirt the heavily sketched plot of Kris Swanberg’s Unexpected: working motherhood and the white savior. Unfortunately, both are dropped just as soon as they are addressed in this saccharine tale of an unlikely, intergenerational friendship between two pregnant women. Sam Abbott, who has the great fortune of being played by the appealing Cobie Smulders, is a science teacher at an inner city Chicago high school that’s set to close at the end of the semester. Unexpectedly pregnant (requisite peeing, WebMD scenes and all), Sam marries her boyfriend John (Anders Holm) at City Hall to the chagrin of her overbearing — but only because she cares! — mother (Elizabeth McGovern). Coming to terms with her imminent unemployment and parenthood, Sam discovers that her star student Jasmine (Gail Bean) is also pregnant. This provides her with the opportunity to prod a welfare-kept, soon-to-be single mother with the seemingly lofty goal of higher education.

A glimmer of hope outside the film’s conventional formula appears during a visit to Sam’s alma mater. Jasmine heatedly explains to Sam that she can’t afford off-campus housing and that she won’t leave her child at home to become the absentee parent her mother was. It may be disappointing that she can’t make college work, but unlike Sam, she’s used to it — she’s not a middle-class white women who had everything she wanted handed to her. It’s a refreshing sentiment, but the conflict between the two doesn’t last long, just as Sam’s desire to secure a new job after the birth of her baby is put aside at her husband’s insistence. Early on, these two come to a half-hearted decision that she will take some time off post-pregnancy, but, rejecting the idea she’ll be a stay-at-home mom, Sam conducts a surreptitious job search. When she eventually spills the beans about an interview, however, the resulting spat with her husband goes unresolved, and something that appeared so important to Swanberg’s character dissolves by the wayside.

Swanberg’s disinterest in exploring these themes suggests an desire to remain middle of the road, inoffensive, appealing to a more generalized audience. But in doing so, she gambles away the more original treatment of these themes Unexpected teases.

If I’m going to rag on the real babies, I might as well take on the fake ones. An experimental narrative developed at the Venice Biennale College Cinema, Rania Attieh and Daniel Garcia’s H. takes a 180 degree turn from their casually observed, low-fi debut Ok, Enough, Goodbye. It begins with an uncanny brand of promise, concentrating on middle-aged couple Helen (Robin Bartlett) and Roy (Julian Gamble), who are like any long-time partners except for their “child” — Helen diligently cares for a fake doll, whom she refers to as a “reborn baby.” The film doesn’t treat the fake baby as a visual gag, along the lines of something like Lars and the Real Girl, but a desperate, sad gesture, one that she extends to a whole coterie of women who join Helen at an eerie “baby” shower. Roy never acknowledges this unusual and faithful practice as he is increasingly preoccupied with his own bizarre phenomena that proves to signal an apocalyptic event.

Roy and Helen’s story parallels that of a young artist couple named Helen (Rebecca Dayan) and Alex (Will Janowitz). Helen is pregnant and almost resigned to her boyfriend’s philandering until a meteor shaped like the head of Helen of Troy crashes into a nearby river and shakes things up for good. People start disappearing, glasses break at their own accord, blood pools in irises, and Helen, it turns out, was never even pregnant.

Halfway through the film, I found myself straining to draw up some connective tissue between Helen and Roy and Helen and Alex, who never meet, and are divided into their own separate chapters for the duration of the film. Could the young Helen actually be the old Helen’s alternate vision of herself? Such an idea is eventually disproved, and it would seem as though Attieh and Garcia have no interest in providing their viewer with answers or explicit relations between the disparate halves of the story.

The film purports to be a contemporary Greek tragedy about two women going insane (both Helens live in Troy, NY — get it?), but the disintegration of H.‘s characters is hardly psychological, as what happens to both Helens is not a personal, but an externally enforced and collectively felt trauma. Alex experiences all of the same apocalyptic symptoms as Helen, so that she never feels isolated in her grief. More effective is the older Helen’s increasingly tenuous grip on reality once her husband disappears. We already know her character to be in need of looking after by another — whether or not that other is real — so the effects of her isolation are far more sensical than other emotional markers transparently imposed by the script.

Clean and beautiful as the film is — and Garcia is a highly capable cinematographer — you can’t shake the feeling that its makers are preoccupied with imagery and symbols rather than a genuine development of the film’s high concept. By the time H arrives at its reverse scale endings, you’re just as numb as the characters, but for all the wrong reasons.