Rotterdam at 44, Volume #3: Then There Were Winners 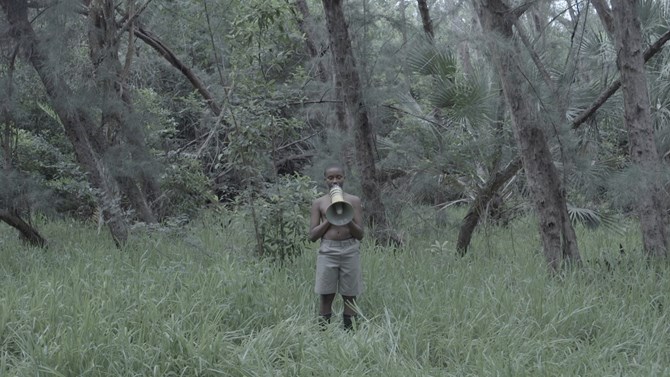 Swimming in Your Skin Again

Rotterdam #44 came and went with less fanfare than in the past. The Hivos Tiger Awards, the main competition’s top prizes, were given out to a trio of films Friday night. The winners — Carlos M. Quintela’s German-Cuban-Argentine co-production La Obra Del Siglo, Jakrawal Nilthamrong’s odd and dreamy Thai drama Vanishing Point and Juan Daniel F. Molero’s pomo comedia-tragedia Videophilia (and other Viral Syndromes) — each took home 15,000 euros. All three remain unseen by this critic, as does the FIPRESCI prize winner Battles, by Isabelle Tollenaere, the KNF Award winner Key House Mirror, by Michael Noer, and the IFFR Audience Award winner The Dark Horse, by James Napier Robertson. In a program that stretches to nearly 400 films, it’s easy to get lost and difficult to draw many conclusions.

That depth, scattered throughout not just competition programs but strenuously curated sections with themes like “Everyday Propaganda” and the always on, “24/7” nature of our modern, networked lives, present an aesthetic inquiry that isn’t easy for the international motion picture media to process. That those two strands, seemingly marginal, contained the festival’s most stirring world premieres (Bitter Lake and Park Lanes respectively), by internationally acclaimed filmmakers (Adam Curtis and Kevin Jerome Everson), went unnoticed by most of the festival’s critical observers. With Rotterdam’s program divisions sometimes making the gems difficult to discover, it’s not surprising that the philistines have, in recent weeks and years, cued the hatchet pieces. (The most notorious was Neil Young’s 2014 gas-and-torch job for Indiewire, How Many Bad Movies Does It Take to Ruin a Film Festival? This Year’s Rotterdam Has the Answer.) A peek through this year’s dense lineup confirms that such hyperbole about Rotterdam is overblown, although a reasonable assessment will find the program heavy with films that, for one reason or another, don’t have much future on the major international circuit. The list of truly notable premieres this year remained light.

The Canon Tiger Award Competition for Short Films unveiled its winners on Monday night, and despite the program’s not setting many hearts aquiver with its selection, it was clear that some remarkable American works — ones not built for Sundance, with its restrictive consideration of running time when shorts programming is involved — had found adoring audiences here. The shorts prizes were dominated by American avant-garde stalwart Ben Russell (Greetings to the Ancestors) and Brit Ben Rivers (Things), who, in the wake of their recent well received collaborative effort, A Spell to Ward off the Darkness, took home two of the three short-form Tigers with a remarkably divergent set of films. While Ancestors, Russell’s twentieth film at Rotterdam since 2002, is in keeping with the formal tricks and African anthropological interests of his Trypps series of short films and his 2010 feature Let Each One Go Where They May, Rivers’ film was a real departure for the nascent experimentalist. Things has a seasonal structure to its still frame, black-and-white images that complicate the viewers’ notions of home and illusion over 20 spellbinding moments.

Neither film impressed me as much as Terence Nance’s astoundingly beautiful toss off Swimming In Your Skin Again. Nance’s newest work, produced by Miami’s Borscht Corp, is unreadable. During a dizzingly quick montage of still shots representing the different “isms,” ideologies and religions the short claims to renounce, a voiceover (Nance’s) announces that the film is not about anything. If we’re to take the man at his word, we are still left with a unshakably potent and expressive abstraction, starring Nance’s brother and mother among other family members, that indulges in a magic-realist-tinged meditation on various forms of black spiritualism, color theory (you’ll never see yellow quite the same way again) and musical performance in churches, forests, beaches and swimming pools that are either color-corrected within an inch of their lives or else contain a natural efferverscence that lifts this movie — with its naked negro children painting yellow dots on each others’ backs, and Bunuelian discontinuity — into the realm of the sublime.

It wouldn’t hurt, whomever outgoing festival director Rutger Wolfson’s successor proves to be, for the festival to prioritize luring back locally-raised auteurs who have since moved on to larger fests for their subsequent world premieres. How that can be achieved is anyone’s guess; the festival’s spot on the calendar is proving to be a real Achilles heel, with Sundance, Slamdance, Berlin and even Göteberg breathing down its neck. That said, the international motion picture media would be better serving its audience, be they cinephiles or casual readers, by finding writers and critics willing to engage with the complexity and thoughtfulness of some of Rotterdam’s headier programming instead of assigning articles to the brigade that seems bent on pooh-poohing the whole affair, whether they make the trip to the south of Holland or not.