“NO COUNTRY FOR OLD MEN” 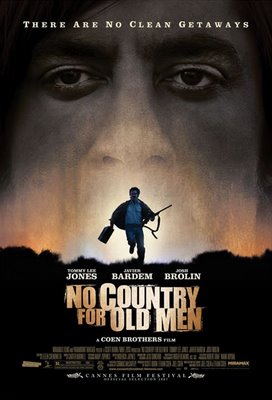 Few films have had an effect of making people think differently about the world, or at least confirming their worst instincts about it. No Country For Old Men is one of those films. Set against the arid backdrop and sparsely populated tableau of West Texas, Joel and Ethan Coen paint a bleak depiction of human nature in which there is no country for good men, who are helpless to stop the evil men.

Josh Brolin plays Llewelyn Moss, an ex-Vietnam vet who, while hunting antelope, stumbles upon a drug-deal gone wrong (so wrong, that not only have all the pushers been killed in gun-battle but their pit bulls have been executed as well). He’s a lone hunter, whose greed, opportunism and brawn extend well past his brain by taking millions in drug money, which does not belong him. Javier Bardem, in his Academy Award winning role of professional hit man, Anton Chigurh, is the Terminator-like grim reaper who sets out to punish Moss for his stupidity and get the money back. There is one person who represents what is good. That man is Sheriff Ed Bell, played by Tommy Lee Jones. But he is old, near retirement and one step behind everyone else.

The film keeps in line with another of the Coen’s previous great works, Fargo. Brolin’s Llewelyn Moss is a descendent of Jerry Lundegard (played by William H. Macy), who attempts to orchestrate the mock kidnapping of his wife in order to get money from his rich father-in-law, never thinking for once, that something might go wrong. The difference, of course, is that while a measure of justice is served in Fargo, a more pessimistic strain is served in No Country For Old Men. I take it as a sign of the times.

Particularly effective are the notable absences of music and dialogue throughout the film. Underscoring the pessimistic themes of a Western noir, we watch laconic characters make their choices, plan their escapes or plot murderous schemes with survivalist precision, all done with visually storytelling and without many words. The solitary nature of cinematographer Roger Deakins’ composition is likewise spare and consequently more powerful. While some may criticize the ambiguity of the drug deal culprits, the mystery of their identity makes the film more captivating. It’s the chase that counts.

The DVD has three extras, the best of which is ‘The Making of’ and features interviews with the Coens and principal cast and crew members. It’s always fascinating to see how these haunting characters work behind the camera and interact with each other.

No Country for Old Men is a Miramax release and hits streets today for $22.99