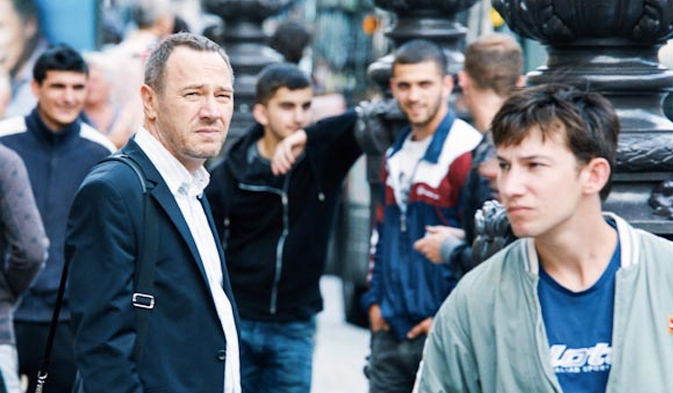 No matter the genre, you discover the imprimatur of the best classical Hollywood studio directors in all of their films—so posits the Auteur Theory. I accept the premise, with the proviso that it be applied, a bit differently, to the more distinctive non-Hollywood filmmakers, American or not. There’s a kernel of truth in the old saw that a director makes the same movie over and over.

Robin Campillo is a French auteur, his work worthy of tracing a generic arc, even though he has directed only two films. In 2004, he made the profoundly disturbing low-budget horror flick They Came Back (Les Revenants), and his new Eastern Boys is a provocative hybrid, beautifully choreographed and executed. (Constants in crew are much simpler to address. Cinematographer is the great Jeanne Lapoirie; Campillo himself, editor—his first profession.)

They Came Back begins with the uniform shuffle of scores of blandly clad, nearly catatonic Lazaruses through the front gate of a provincial town’s cemetery and down its main street. They resemble more the colonized beings in Invasion of the Body Snatchers than the bloody zombies of Night of the Living Dead. Some reunite with the loved ones they left behind some years before. At the center of the film are one of the returned and his widow, whose lapsed bond is tested by the bizarre circumstances.

At first conditionally welcomed all across the earth, these migrants from the netherworld are offered safe haven by the powers-that-be and put to work. They are expected to contribute to the economic well-being of their hosts, not unlike the desperate but fully alive foreigners today who take the low-paying jobs frequently rejected by American nationals.

Their performance is hardly optimal. You can imagine the paranoia: They might strain the social welfare system. They are so dysfunctional that they are relegated to the most menial tasks. The dissatisfied outsiders resort to sabotage, causing large-scale explosions. The authorities intervene. They are sprayed with a toxin that induces a comatose state, then placed atop the graves from which they had emerged.

Eastern Boys, on the other hand, defies generic cataloguing. It is definitely not a horror film. You could call it a gay film, but it is about much more than the specifically homosexual. You can find elements from films both straight–Michael Haneke’s Funny Games, for example—and gay, such as Andre Techine’s I Don’t Kiss, and much of Gus van Sant.

The very first shot is a slow tilt down from the ornate classical statues above the roof of Paris’s dizzyingly humming Gare du Nord to a gaggle of touchy-feely teen Eastern European hustlers who jump about with boundless energy. Irony and social commentary are already at play. These kids will never fit into the social contract. The boys move around under the watchful eye of security personnel and a few potential johns. The older men could be on the down-low, the youths anything but.

One prospective buyer, Daniel (Olivier Rabourdin), a naïve, nebbishy, fiftysomething suit, has a unilateral coup de foudre with a skinny, boyish-looking Ukrainian from Chechnya named Marek, aka Rouslan (Kirill Emelyanov, who has the profile of an adorable anteater). He follows the youth inside and down to a lower level, where he strikes a mutually-agreeable business proposal and writes down his address, a building just outside the city that is as sterile as it is upper-middle-class.

Marek does not arrive alone. His pals invade the apartment, partying while they remove all his possessions and trash the place. Daniel is so enamored of the boy that he allows himself to be cowed by the gang’s straight, pumped-up tease of a Russian leader, Danil Vorobyev’s dictatorial Boss. (Campillo does not lose sight of the part heightened fear plays in carnal desire.) He even turns into a dancing fool when he’s not abruptly and incredulously walking between rooms, camera gracefully adjusting to his movement. Boss, who wields power indiscriminately while playing protector, is a surrogate father to these kids, fish-out-of-water. 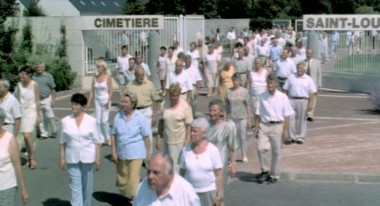 Bypassing his pimp, Marek begins to clandestinely visit Daniel solo. His detachment from Daniel sexually and emotionally is a power play of a different sort. Over time, he curbs the icy behavior and rustles up affection for the man, who takes care of him in ways besides the established financial: wiping blood off his face, sending him to a clinic. Although the change in attitude stems from a yearning for costly gifts and a break from the dorm-like hostel where all the boys, registered not by name but by number, reside as guests of the social services, Marek becomes more and more devoted. Daniel also alters his stance. He starts to embrace an alternative form of attachment. He no longer wants sex, only to provide the boy his own bedroom, a place to be safe. Love trumps lust. It becomes situated in the day-to-day.

When Boss realizes that the two are plotting an escape from the hostel and the gang’s collective way of life, he becomes maniacal and violent, even striking the staff. He orders his minions to muffle and tie up Marek, and, after stepping on his face, has him locked inside a storeroom. Daniel attempts to release the boy. Somehow this wimp digs deep into his reserves of strength to best everyone in the power department.

At the same time, the cops raid the establishment in response to Daniel’s phone call warning events among the immigrants there are quickly degenerating. The film itself goes into high-energy gear, a handheld camera enabling the audience to keep up with rapidly escalating events. While the teens try to get away, the police load into buses all the hostel’s tenants, young and old, male and female. I’m not sure which are documented and which await deportation, but The Law treats them as one homogeneous invasive mass.

The attitude toward immigrants is far different from Europe’s embrace a generation or two ago of workers from their former colonies and other European and underdeveloped Third World countries. A new factor has entered the picture: The unskilled boys and many of the others are discards of the scattershot capitalism that hit the East in the not-so-distant past.

Between the two films, Campillo co-wrote three with director Laurent Cantet that influenced Eastern Boys. In the Cannes Palm d’or winner The Class (2008), the group of schoolchildren runs around spontaneously, not unlike the boys at the station. The 2012 English-language feature Firefox: Confessions of a Girl Gang set in a provincial American town in the ‘50s, reduces the number of young people moving about and tackles (unsuccessfully) the difficult-to-digest topics of teenaged girls selling, or pretending to sell, their bodies, righteously stealing from older men, and violence as a legitimate means to nebulous ends.

Most significant is the earlier Heading South (2005), about three white, middle-aged women from the U.S. who visit a resort in pre-AIDS Haiti to buy sexual favors from well-hung and -built minors. Sexual imperialism and commodification of others are subjects shared by Heading South and Eastern Boys, especially troubling on account of economic and age disparity. The playing field is not even. Heading South is adapted from three stories by the male Haitian writer Dany Laferriere, but the film’s point-of-view is the women’s. They speak directly into the camera to tighten the character-viewer bond.

Similarly, Eastern Boys is relayed from the more senior Daniel’s point-of-view. He’s gentle, soft-spoken, and endearing in his lack of social skills, but, even though he attempts to redeem himself (will he replace Boss as parent?), he is the agent of exploitation. Marek accuses him, correctly, of not caring less about his history, which includes losing both parents to war. Another irony: His short life has been much more colorful, if traumatic, than that of his host, a man who carries a briefcase and looks like an accountant. This nine-to-fiver throws a dinner party comprised of a mostly lily-white collection of guests whose most salient joint trait is sameness.

Also problematic is the seemingly innocuous presence of Daniel’s Asian cleaning woman, whom he leaves with the debris from the destruction of his home and some euros, without the courtesy of an explanatory note. She, too, is a purchased product who is granted no dignity. In spite of these observations, the filmmaker refuses to judge his creations. He even gives the volatile, snake-like Boss a sympathetic scene.

You can try connecting the dots between his debut and sophomore features to uncover similarities and genesis—up to a point. Theory and ideology are useful but at the end of the day, they remain abstractions. A clearer picture of the trajectory of his opus requires relevant information about his personal life, important bits of bio.

Campillo is a gay man, who, at the peak of the AIDS crisis, took a few years off to work full-time against the scourge. Born in Morocco, he just may be in part of Arab descent. I do not know whether he has in his intimate life taken on the role of exploiter or exploited, or both, but he is obviously acquainted with the dynamics involved. His informed take on marginalization is extremely affecting. He has the audience in the palm of his hand.