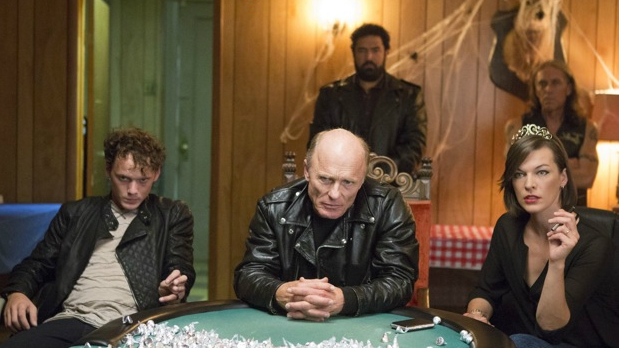 In delivering the first fully 20th-century filmic transplant of Hamlet, Michael Almereyda made wondering how he’d update each famous beat part of the fun, from “to be or not to be” rendered as prince Ethan Hawke’s internal monologue against Blockbuster’s “Action” aisle (totally unexpected, too-obvious only after its execution) to the total collapsing of “The Mousetrap”‘s text into a wordless Lewis Klahr short. That 2000 rendition took place in sleek, ever-more-expensive Manhattan — the birthright setting of one of Shakespeare’s most familiar plays, which deserved nothing less. This Cymbeline‘s location is never specified, but you can see Bay Ridge A-train subway stops at the frame’s sides; it’s an outer-borough and upstate movie that never once glimpses Manhattan, too often the default center of New York onscreen.

As contextualized by the predictably biased but seemingly somewhat-informative Royal Shakespeare Company in their edition, the disreputable, generically mutt-ish Cymbeline (last filmed in Germany in 2000 in a not very prolific screen career) is most easily understood as a very of-its-time, morale-instilling portrait of the nascent British Empire inheriting the mantle of the Romans, a torch-passing predicting a similarly long rule. The overarching national narrative has to do with British king Cymbeline (Ed Harris) first refusing to pay tribute to the new Caesar before ceding to emissary Caius Lucius (Vondie Curtis-Hall); his strategic change arguably has a lot to do with the knowledge that this is the gracious tribute of ascendant Albion to fading masters unaware of their imminent obsolescence.

This colonial torch-passing translates poorly to the present day, necessitating severe recontextualization: Cymbeline is now the king of a drug-running motorcycle gang, the Romans the police, and there are a lot of guns on hand. It’s hard to tell whether Almereyda chose Cymbeline for its unfamiliarity and attendant pliability — as a skeleton on which to hang present-day concerns — or whether he chose it after smartly committing name actors (including a returning Hawke) to a bankable source. Almereyda again has a lot of fun with finding unforeseeable uses for the text, ones obvious even to the uninitiated (the sole Shakespeare play I’ve seen filmed without reading it first). Bullying prince Cloten (Anton Yelchin) pursues princess Immogen (Dakota Johnson) — who has rejected him, married impoverished Posthumus Leonatus (Penn Badgley) and fled her father’s domain — by looking at the Google Maps directions her sister pulled up when Immogen fled; “this is the history of my knowledge concerning her flight” is re-envisioned as browser history. a smart use of the changing lexicon. Thus ad infinitum; these are the easter eggs you come for first and foremost, close reading as near-gimmickry.

Caius Lucius is now a representative of “Rome P.D.,” but this isn’t a cute evasion of meaningful present-day analogies. The corrupt Roman P.D. demands a cut of drug sales from Cymbeline’s (drug) empire, which might seem like a rote update of the familiar crooked, as-deep-in-as-the-criminals law enforcement familiar from rotely cynical popular movies. Such satisfyingly venal dynamics suggest the very real problems posed by police acting as de facto revenue collectors through parking tickets, drunk and disorderly citations, and other means for cash-strapped cities. As Matt Taibbi pointed out, Eric Garner died at the hands of police cracking down on single-sale cigarettes precisely because the NYPD and their equivalent forces are now fulfilling the role of dubiously motivated tax collectors. In that light, the idea of “paying tribute” gains new, vile meaning: to prosper as a business or citizen in NYC, even as an outer-suburb outlier (criminal or otherwise), is to be complicit in a system that combines systematic racial inequality with the tacit task of remedying budget shortfalls.

This perhaps unintended metaphor is buttressed by Almereyda’s inversion of the penultimate section when players retreat, regroup and disguise themselves in the forest in prepartion for the improbably restorative finale. Cymbeline is sometimes understood as a feverish, nigh-demented reworking of familiar Shakespearean situations, notably Twelfth Night‘s female-as-man reconciliation in an Arcadian space. That idyllic forest is here replaced with strip-mined upstate land, a suitably impoverished site where a banished courtier (Delroy Lindo, as if updating Clockers‘ drug kingpin) and his two adopted sons to hide out.

This indifferently spoiled land, fit for none but the poorest, is a clearly political choice of location, an indication that corruption and brute power is exercised as much upstate as in the city. Setting aside its notes on urban policing and environmental despoliation (and the perhaps inevitable presence of a disappointing president Obama onscreen), in many other ways this Cymbline is skin-deep, jettisoning much of its problematic text for the equally satisfying and perplexingly unmotivated, bloody conflict of powers and generations. It’s no Experimenter (Almereyda’s other new film after a too-long five years without features), but it’s intelligently shot and crisply engaging as a thought exercise and performance showcase, with all players on an equal wavelength that’s beautifully toned-down. In a part that would for once excuse it, Ed Harris thumps no tables and doesn’t raise his voice the slightest: amazingly, John Leguizamo also delivers a beautiful, near-unprecedently restrained performance. As main villain Iachimo, Ethan Hawke is a credibly naturally Iago without the character development; he exists for malevolence’s own sake.

Finally, there’s the matter of the film’s twice-changed title, for which we can reasonably extrapolate a few reasons. Debuted as Cymbeline at the Venice Film Festival, it was subsequently retitled as Anarchy. There were presumably two reasons for this: most obviously, the transition from imperial court drama to a motorcycle gang war setting allowed for an association with Sons of Anarchy, itself an unabashed Hamlet riff and a provenly profitable example of motorcycle-club drama. That would, presumably, draw in viewers who love the show and possibly also confuse types who thought Anarchy indicated some kind of relationship to the show. That label also would have allowed the title to rise to the top of the alphabetically-organized VOD pile. But now Anarchy is Cymbeline again, albeit with a poster whose pull quote promises a mash-up of, yes, Sons of Anarchy and Game of Thrones, as if a star-struck rendition of obscure Shakespeare isn’t enough to draw them in. Which it probably wasn’t; here’s hoping this middle marketing approach works.