“You Can’t Make This Stuff Up”: Alison Bagnall on Funny Bunny 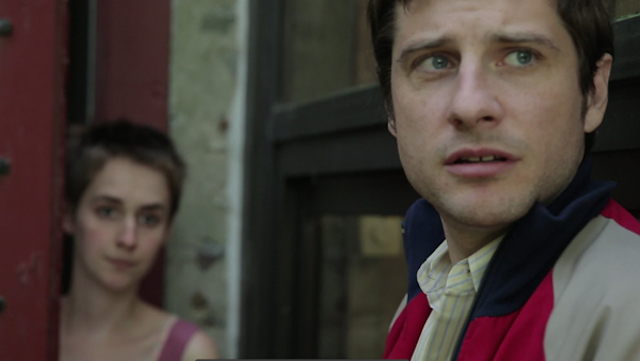 by Sarah Salovaara
in Director Interviews, Filmmaking
on Mar 13, 2015

Funny Bunny, Alison Bagnall’s third feature, opens with a man shuffling door to door in suburban, middle-class Philadelphia. He’s not pitching bibles, but rather, a means to an end of the childhood obesity epidemic. Gene (Kentucker Audley) is just one player in the off-kilter, quasi-love triangle that takes center stage in Bagnall’s idiosyncratic film, as he’s soon joined by a well-off man-child — the aptly named Titty (Olly Alexander) — and a reclusive, emotionally tenuous young woman named Ginger (Joslyn Jensen), who makes a living peddling her bunny’s ailments on the web. Much like her 2011 two-hander The Dish & The Spoon, Bagnall displays a deft touch for handling the internal and external turmoil of her characters as they desperately try to connect with one another and the occasional activist cause at large. Filmmaker spoke to Bagnall about the story’s origins, harmonizing emotions, and dress-up scenes. Funny Bunny premieres Sunday in Narrative Competition at the SXSW Film Festival.

Filmmaker: The film really succeeds as a three hander insofar as each of the three leads feels fully realized as both standalone characters and together, as part of an ensemble. Can you speak about devising Gene, Titty, Ginger and their interweaving story lines?

Alison Bagnall: Gene was the first character I thought of and he remained the spine of the story and of the trio. He came about because I started thinking about a character who feels utterly unlovable. I was thinking about a man who feels so unlovable that he believes he could never get a woman to spend enough time around him to be able to see how special he is, and so he has married his second cousin who grew up next door to him because she promised to marry him when she was eight and he held her to that promise. But it’s a loveless marriage and he accepts emotional neglect, even expects it.

I had been doing extensive research at the time on the childhood obesity epidemic, which was one of my obsessions. The obsession came about because I was running an after school library club in upstate New York for a year and I had two 8 year olds who were at least 150 lbs, so I started doing intense medical research on what lay ahead for them. I even worked in a hospital for two surgeons who did access for dialysis patients. All their patients had kidney failure due to preventable chronic disease related to obesity. Later, I imagined a guy – Gene — who is intent on educating people about this public health trainwreck (diabetes 2) but who has no social filter and so just talks about it to everyone, usually too bluntly. He’s basically me if I didn’t have a filter. Gene likes to help people. He lives for that. He does not know how to do things for himself, however.

I thought of Titty after observing the babies of high-income double breadwinners in Manhattan while I was raising my own kids. I would watch these babies with their babysitters in the park, and they looked so lost and like they were just waiting for their parents to come home. I later met a guy who was astonishingly similar to the character I had been envisioning. His name was Titty, he had grown up super wealthy, was a total product of maternal neglect. He had sued his own dad who had stolen his inheritance from his grandfather. It was incredible that there was a real person just like I had been imagining. This Titty was even raised as a bastard son, because his father was convinced his wife had cheated on him. He was not a bastard, but they raised him as one. You can’t make this stuff up, it’s so incredible.

Ginger is based on my mother’s cousin Ginger Parks, who took her life at age 46. As a girl, she was abused by her stepfather, who was a child predator (and a deacon at the local church and respected local businessman). She drove to her mother’s cabin, sat in the rocking chair that her mother rocked her in as a baby, and shot herself in the head. I wanted to imagine a story in which a kind person came along and rescued her. I wanted to change the ending of her story. As far as the internet thing, I was inspired by the wizard in the Wizard of Oz, how he seems one way from afar, and when they travel to actually find him he’s just a little balding grumpy man in a booth.

So I was interested in how these three characters affect each other, and how they might heal each other a bit just through contact and spanning time together.

Filmmaker: With its depictions of drastic activism and the internet’s capacity for alternate identities, the film feels very contemporary. Do you feel like you create work that addresses the present moment or is that perhaps more subconscious?

Bagnall: I started thinking of this film over ten years ago, so the topics in it hadn’t been really addressed in movies yet. I was just developing characters who had my own obsessions; the childhood obesity epidemic and factory farming among others. The Ginger character’s internet thing was inspired by that old site, Suicide Girls. I thought it was so striking and odd how these everyday girls would put themselves online in that way. Then, when sites like that got so commonplace and present in the consciousness, I actually lost interest in them and moved away from Ginger having a site that was of a strongly sexual nature.

So yeah, I actually have little interest in doing films about super current topics. I like to make films about topics that I’m thinking about a lot. In this case, it just turned out that the film took too long to make and instead of being ahead of the curve, I am right in the middle of it.

Filmmaker: The scene in The Dish and The Spoon where Greta Gerwig postures as a man, while dressing Olly Alexander up as a woman is one of my favorite scenes in recent American indies — it says so much about the vulnerability and degradation of femininity through a superficially simple act. Ginger shares two somewhat similar, roleplaying scenes with Titty and Gene throughout the movie. Though the films themselves are very different, do you sense an overlap in the characters from Funny Bunny and The Dish and The Spoon?

Bagnall: That’s funny. I never even thought of the connection between the two scenes, but it’s true that they’re related. The scene in Dish & Spoon came about because I was initially just riffing on how Olly Alexander had a very feminine face, and I thought it would be interesting to dress him up like a girl and put make up on him. But then it turned into something more interesting, namely that Rose is re-enacting what she thinks her husband did. Or, moreover, she feels betrayed and hurt so she wants to hurt someone. The scene in Funny Bunny is similar. Ginger has been brutalized so she brutalizes (at least emotionally). Greta Gerwig – on the set of Dish & Spoon – was quoting the line in Greenberg “hurt people hurt people.” Both scenes are about that. It just happens to be a woman being sexually manipulative/hurtful, which is perhaps less commonly depicted in films.

Filmmaker: On a similar note, Gene and Titty both possess a familiar sense of male entitlement when it comes to pursuing Ginger, but they’re let off the hook somewhat because they’re such oddballs. Why is it that lost men so often cling to a woman — in this case, one who is fairly lost herself — as some vague concept of stability?

Bagnall: Yes, if they were anyone else, their actions would seem really obnoxious or chauvinistic, but they are such clueless innocents and well-meaning do-gooders that I am hoping people will let them off the hook. I don’t think of them as clinging to a woman for stability so much (though one could definitely interpret it that way — it’s meant to be open to interpretation). I think of them as looking for a mother. They both suffer from maternal neglect in different ways, and Ginger represents the mother. As for Gene, he is looking for someone to rescue. He lives to help people. Gene’s challenge is to learn how to do something for himself. That’s something he doesn’t know how to do at the beginning of the movie.

Filmmaker: SXSW bills Funny Bunny as a ‘serious comedy,’ and it feels as much in almost every scene. Can you speak about crafting the tone and harmonizing the sad and desperate with subtle humor?

Bagnall: That is my main interest in film, walking the line between humor and poignancy. I like the idea of drawing in an audience with humor and then, when you’ve got them – if you’ve got them – making them sob. That sounds so manipulative — ha! I’m really trying to make myself laugh and cry. Those are the kinds of movies that I love. I’ve never been drawn to movies that are all sad or all funny. The contrast of the humor and the sadness heighten each other. The humor makes the sad things sadder and vice versa. I was sitting in an audience at LAFF during my first feature Piggie, and the man in front of me was chuckling and laughing and then at the end I heard sniffling and realized he was crying. I was ecstatic. It was addictive. I live for provoking those responses through a story.

The work I’ve done isn’t necessarily rooted in the super real, the ordinary. The films exist more in a place that lies between reality and the world of the mind or the soul. They are more an interior landscape, a mental landscape. I admit that I prefer to live inside my head more than in the exterior world, which feels drab, and too full of cars and cement and chain stores. One of our producers, Laura Heberton said that Funny Bunny and Dish & Spoon – rather than ‘realistic’ — are like the “memory of an ache.” An ache can be sad. An ache can also be sweet.