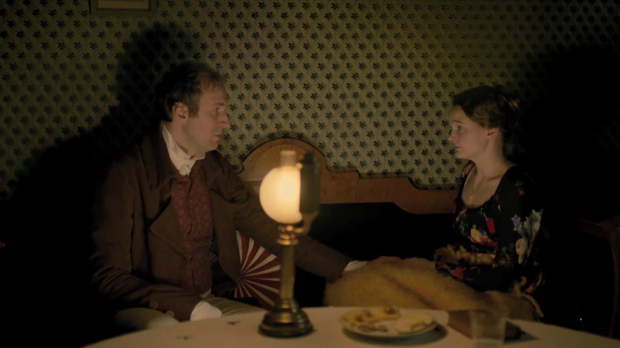 There’s a lengthy sequence, something like the climax of Jacques Rivette’s 1969 L’Amour fou, when increasingly at-odds actress Claire (Bulle Ogier) and theater director boyfriend Sebastien (Jean-Pierre Kalfon) go on a manic destructive binge in their apartment, alternating sex with the decimation of their physical space, at one point tearing off the wallpaper and breaking down the wall to their neighbors’ apartment. This frenzy lasts for a considerable amount of time until Claire announces “That’s enough” — and just like that, a mutually toxic relationship hits its terminus.

The delicate walls comprising the sets of Jessica Hausner’s Amour Fou — covered with ornate, thin wallpaper, the sound captured within them dry, hollow and unnervingly free of room tone — would not withstand such treatment. These plainly artificial interiors represent the home of Henriette Vogel (Birte Schnöink) and her husband, simply referred to as “Vogel” (Stephan Grossmann). Here they welcome a regular salon set, including the young writer Heinrich von Kleist (Christian Freidel), whose troublesome novella The Marquise of O was filmed by Eric Rohmer in 1976 on sets that similarly gloried in their non-naturalness; Hausner seems to be referring back to these even before introducing their goofily plaintive-looking author.

Marquise deals with a woman raped in her sleep by the ostensibly gallant Count F; in the end, she marries him. This scenario strikes Henriette as deeply moving, a story about a woman whose love conquers a monster. “That sounds rather strange,” is Vogel’s nonplussed reaction. “Incidents of such a nature rarely happen.” (At this wholesale dismissal of the pervasiveness of sexual assault, a hearty guffaw went up from the press corps.) Given her sympathy for von Kleist’s work, Henriette makes a seemingly simple mark for his deepest desire: to commit mutual suicide with someone who shares his melancholic wish to leave this intolerable world.

Henriette is initially resistant, but when diagnosed with an incurable tumor she changes her mind, and not for the last time. It’s one of Hausner’s little jokes (repetition being a key principle of comedy) that this mutual consummation is scheduled, canceled and reattempted time and time again: this is a mutually destructive relationship comprised of only one, initially hypothetical act, with ancillary sexual and social relations virtually elided. This cycle is reminiscent of a very literal version of Maurice Pialat’s nobody-learns-anything relationship drama We Won’t Grow Old Together, another story about a couple that repeatedly reunites, nullifying each break-up that would serve their mutual benefit. von Kleist persuades Henriette she has a latent death wish: “This may often happen. You think you want to live, but you want to die.” He’s a seducer who promises something like romantic liberation while talking her to(wards) death — mansplaining as murder.

When Henriette has decided she wants to die and von Kleist enters the room, she literally comes into focus in the foreground as she moves towards him. Hausner grants equal visual attention to a nearly mute maid (Alissa Wilms), whose job is to know her place by looking pale and perpetually spooked, her default state signifying unobjectionable non-existence as a person. Her half-glances — of surreptitious congratulations to Henriette’s daughter after a piano performance, of deep concern and pity when Henriette’s terminal diagnosis is announced — convey cognizance of matters supposedly beneath her rank. And class is of intense concern: new taxes are to be implemented upon all, even the aristocracy, who chatter concernedly about this appalling development. It’s another dark joke that as they move towards death, Henriette and Heinrich are invested in hoping a social order semi-intolerable to both survives them. The only time Heinrich seems genuinely shaken is on learning his cousin Marie (Sandra Hüller) has married a Frenchman (hence a progressive), while Henriette leaves her daughter with the uninspirational prognosis “You will be a grown up and you will have your place in life.”

Hausner’s film is funny in its artificial settings and myopic morbidity. She seems to side with Marie, who dismisses Heinrich’s longings with a pragmatic outlook: “I agree that life is meaningless and people are cruel, but there’s no use in letting it bother you so much.” Visually bracing, rigorous without being dry, Amour Fou can be very opaque about what’s roiling underneath this perverse biopic, but that doesn’t make its final moments any less affecting: a mutual suicide in which consent isn’t asked for. A class above her maid, Henriette is still a woman, and no one asks her what she wants when it really counts.

Amour Fou opens today in New York at Film Forum and is distributed by Film Movement.