“In a Dream World, I’d Want People to Leave with the Feeling They Could Do Anything”: Verena von Stackelberg on Film Exhibition in Berlin 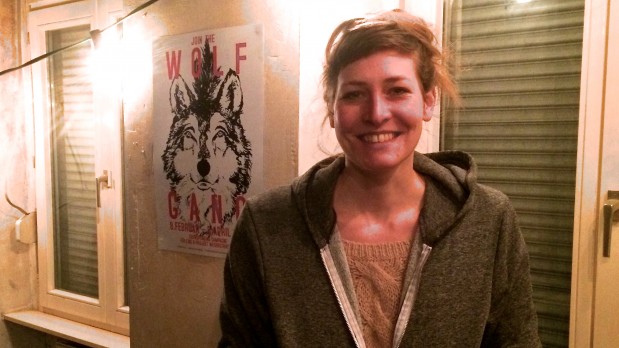 I’m walking to a bar after seeing Jonathan Glazer’s Under the Skin in Berlin’s progressively gentrified neighborhood, Neukölln. Our group of four is unanimously in favor of the sci-fi thriller starring Scarlett Johansson. But by the time we take our seats in the bar, rumblings of an argument have begun. When my challenger brings up male-gaze, I say that its existence in cinema may be fundamentally problematic, but for me, its presence in Under the Skin is necessary in the experience of the film. He says his issue with male-gaze actually relates to the objectification of the male subjects, not Johansson. He finds that men are equally victimized by male-gaze, but unfairly left out of the conversation. Long debate ensues.

After a screening, still half submerged in the world of a story, the space to ideate is wide open. We bypass small-talk to consider different interpretations and new perspectives, even unconvincing ones like the equal objectification of men and women in film. And no matter where the conversation leads — I’m remembering a time of eavesdropping on endless Gone Girl inspired tangents in New York — the act of seeing a movie and discussing it afterward is gratifying.

Verena von Stackelberg calls these conversations “possibilities of exchange.” This experience is important to her for the design and atmosphere of Wolf, her new cinema opening in Neukölln. Wolf is not just a movie theater; it’s a multi-functional cinema space to attract and foster the neighborhood’s film community. Friends and supporters in the “Wolf Gang,” as von Stackelberg calls them, have already begun gathering in Wolf’s bar, mostly for events to promote the current crowdfunding campaign. Gang members aside, everyone in Berlin seems to be talking about Wolf.

Von Stackelberg is from Heidelburg, Germany, and studied Mixed Media Arts in Barcelona before moving to London to study Film and Photography. After heading events and film programmes at Curzon Cinemas and Artificial Eye in London, she moved to Berlin and worked in film distribution. Von Stackelberg has also programmed at the Cambridge Film Festival, and has served on the advisory committee for the competition section at the Berlinale.

Opening a cinema that does more than screen films is a result of von Stackelberg’s love of film culture, and desire to broaden access and possibilities for the community. Showing independent films with limited distribution, or without any distribution, and hosting workshops are just a few of her many ideas to change the indie film landscape in Berlin. When von Stackelberg walked me through more concepts for Wolf, my head was spinning. It’s an ambitious project, but von Stackelberg’s devotion and enthusiasm for Wolf’s potential is infectious to those around her, myself included. She may not feel fully comfortable in the spotlight as the face and mastermind of Wolf, but she’s undoubtedly leading something that feels a lot like a movement.

Wolf is the perfect name, I think, as I leave the cinema construction site for the first time. Independent in spirit but powerful in numbers, von Stackelberg’s Wolf Gang is fighting the indie film fight. I look forward to future movie nights at Wolf to participate in some film fights of my own.

Editor’s Note: Wolf is currently in the midst of a crowdfunding campaign for the construction and operation of its Berlin-based theater. Please visit its page at KissKissBankBank and consider donating.

How did you start working in film?
When I first arrived in London, I passed a corner in Soho that looked like a cafe under construction. There was a sign that they were hiring so I went in, applied, and got the job. What I thought was a café turned out to be Curzon Soho, the best art house cinema in London. I was just there at the right time, in the right moment. Eventually I got promoted to head of public events, starting off in a basement without daylight. But as the company grew (and we moved to a sunlit office), my responsibilities grew, and I was able to create a strong network. It was such a vibrant and inspirational atmosphere of young and international cinephiles.

Did you want to be a filmmaker and remain living in London?
While working and studying, I realized I’d only be a mediocre filmmaker and that showing and supporting films felt bigger for me. I never wanted to stay in London forever, and after ten years I had enough and moved to Berlin. Around this time, digitization had started, and there were a lot of questions in the air about the future of the film industry. I felt myself formulating ideas and readjusting what I wanted to do.

Why Berlin?
London makes you feel like nothing is possible unless you are a billionaire. But in Berlin, you can make things happen much more easily. Berlin felt like a playground when I arrived. They closed down an airport and turned it into a public park! There’s a real sense of space and possibility. I really just felt, if not now, when.

How did you find working in Berlin full-time as a distributor?
Many cinemas in Germany were struggling with indie and art house films. The days were gone of relying solely on ticket sales. I knew we needed a more holistic place to really draw the people, but after seeing so much struggle, I wasn’t sure I wanted to continue working in the film industry. I went to Sudan for two months and met the manager of this Bauhaus open air-cinema. Here was this Copt woman, in this very patriarchal society, just doing it. It left an impression on me. When I came back to Berlin, I started carefully developing my idea.

How did you find this space in Neukölln?
I live across the street and always had my eyes on this corner. This space was a brothel, but when they advertised it for rent, I was the first to arrive, to say I wanted to buy instead of rent. They gave me four months of due diligence, to find investors and experts, cinema professionals, architects, and approval from city council and building authorities, to prove I could do it.

Are you still working with a team of experts to prepare for opening and develop the business model?
I have advisers and worked with different start-up coaches in the beginning. Some of the plans are still in flux because things like ticket prices and audience habits will change. Even though funding is an aspect of the process now, we will be for-profit. I want to show that it’s possible to have a vibrant film space that can carry itself. We have two screening rooms, 50 seats each, a public bar, and a third flexible space that will have many functions. Instead of building a regular third screen, we are keeping it open because who knows how cinema habits will change. The projector in the back, screen in the front, and audience in the middle is not a given. We have to adapt to the future, so we are looking at movable walls and projectors on the ceiling to open the space for different possibilities. We also will have post-production facilities and a co-working space.

This is such an ambitious project. How can you do it all?
I’ve become such an idealist actually in the past few years. If I stayed in full-time employment, I would have probably become a pessimist. But now, I know we can do so much more than we think we can. I’m flying because I know I’m not alone anymore. I have the confirmation from others that this is exactly what we need, and we are on the right track. There are so many gaps that still have to be filled, but I’ve done my homework so it’s getting there. It’s possible now.

What experience do you hope people will have at Wolf?
In a dream world, I’d want people to leave with the feeling they could do anything, and that there are no barriers. You can see a film or show your film or have a drink in the bar, and maybe something unexpected will happen.

What makes the perfect cinema experience?
Technically it needs to be flawless. Also, it’s an immersive experience so you can’t pause for a snack or drink like you can when watching a film at home. Immersed in a dark space, in a room with strangers, you are a captive of the screen. This physical experience changes and informs the mood. There also is a possibility of exchange afterward. If you can have discussions about the film in a bar, there are these beautiful moments when people from all over the world share very similar or very different viewpoints, and it can be a very rich and eye-opening experience.

What has been a source of inspiration for you?
The Jonas Mekas Movie Journal really changed my perspective of what it means to run a cinema. It’s not just a business. It can be extremely creative. I was inspired that his writing from the ’50s and ’60s, and the way he set up the New York Anthology Film Archives, lacked any elitist attitude. He said a film must be flawed or imperfect for the spirit to remain intact. His ideas about film are truly democratic. And actually, the last event I did at Curzon before I left London was with Mekas, and he said he wanted to come to Berlin when I open my cinema.

How do you unwind or handle stress?
In the beginning, I once got up at 6am and went running, and it felt great. But I never did it again. I also tried autogenic training for a bit. All this stuff, in the end, is overrated. I just try to live a normal life. It’s artificial to trim yourself. What matters most to me is not neglecting the people closest to me.

Has giving up ever been a consideration?
I haven’t had a holiday in years. I’ve poured all my money into this. There were times when I thought I should let it go, but every time I have doubts, my boyfriend, family, and friends remind me that I cannot give up. I’ve been surrounded by people who have worked so loyally these past three years to make it happen. In a way, the goal isn’t just opening. Everything that’s happened along the way has already been so beautiful. Someone from Copenhagen heard about us, visited, and is now setting up a similar thing. I think Wolf has kicked off something, and whether it’s here or somewhere else, something has moved.