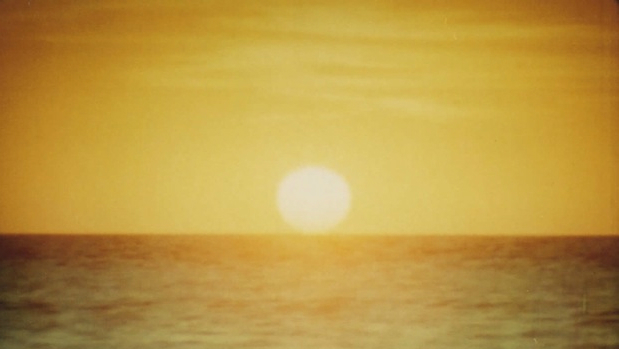 One of the unexpected pleasures of the 53rd Ann Arbor Film Festival (AAFF) was, at first, a cringe-inducing annoyance. It began with the first screening on Wednesday morning, a presentation of work by AAFF juror Jesse McLean. The lights dimmed in the Michigan Theater Screening Room, the smaller of two auditoriums used by AAFF in the spectacular Michigan Theater. Just as the audience nestled into their seats and darkness took hold of the room, something interrupted the transfixed environment: a wincing screech from the front of the room. The sound continued for several seconds before halting with a loud thud. Then, every few seconds, another brief screech. Then another. The cinema screen was alive with the sound of masking changes.

These sounds occurred time and again over the course of the weekend, leading to a range of responses including muffled giggles, incredulous sighs, and plenty of post-screening fodder for discussion. Still, I can’t remember a time in recent years (outside of complete technological breakdown or expanded cinema performances) when the work of projection has been made more evident and seemed so crucial. Inadvertently, the projectionists’ movement of the creaky masking stood as a reminder of the competing formats available to filmmakers today and the artistic outcomes of selecting one rather than another. Luckily, the festival refuses to limit itself. AAFF is a remarkable festival for a number of reasons, but what really stands out is its willingness to go where artists want to take it. Its diverse slate and communal atmosphere suggest an embrace of contemporary cinema’s multifaceted nature that very much allows for conflict and contradiction among the various films and filmmakers.

Or should I say “artists”? While the last few years have indicated an erosion of the line between “artists” (presumably showing in galleries) and “filmmakers” (presumably showing in cinemas), AAFF’s exciting inclusion of the work of Tacita Dean acted as something of a litmus test in how far this line has and has not moved. Best known for gallery-based 16mm film works, Dean has been a vocal proponent of the film medium, most recently as part of a “The Future of Film” panel at the Getty Museum where she spoke alongside Christopher Nolan. However, her interest in celluloid hasn’t necessarily translated into an interest in cinema: AAFF was the first time her work had been shown in a theater, something that made Dean a bit uneasy. She stated several times that she considers herself an artist aligned with painting and sculpture, not a filmmaker concerned with narrative. Fair enough, I suppose, but her purposeful distancing from “filmmakers” struck an odd chord in the context of a festival that maintains such a strong commitment to a range of filmmaking that, in fact, can help further inform and contextualize Dean’s work without losing sight of important differences in gallery and cinema practice.

Despite Dean’s hesitations, AAFF allowed the audience to make implicit connections between her evocative, tender films (screened Wednesday and Thursday) and other work seen over the weekend. Not that any films really needed others to stand out: though the smaller scale of the gallery and the presence of the projector in the room would allow for an intimate interaction with Dean’s The Green Ray (2001), Kodak (2006) or Edwin Parker (2011), cinema granted an extraordinary magnitude to each of these works, which use the medium of film to explore a singular moment in time.

The Green Ray is an attempt to capture “the green flash” that may or may not occur as the sun disappears on the horizon in Madagascar. At two-and-a-half minutes, the length of a single roll of film, The Green Ray reflects on precarity through a fleeting moment of light moving in time. The sea has become a favorite topic of experimental filmmakers in recent years, and this trend continued at AAFF with the presence of two feature length documentaries – Lonnie van Brummelen and Siebren de Hahn’s Episode of the Sea (which won the Lawrence Kasdan Award for Best Narrative Film award) and Félix Dufour-Laperriere’s Transatlantique. Episode of the Sea has received much acclaim since its premiere at the Toronto International Film Festival, and for good reason. It provocatively explores the means and methods of the conservative Dutch fishing village of Urk through the peculiar voices of its residents. In a remarkable collaboration, Brummelen and de Hahn align themselves with the Urk community by explicitly comparing ethnographic celluloid-based production with outmoded, communal fishing practices. In a strikingly different register, Transatlantique surveys the atmosphere of a ship set out on a transatlantic voyage, maintaining an unequivocal distance from subjects on board. Instead, driven by an eerie, dream-like tone, Transatlantique observes the ship’s ever-changing mood through expressive shifts in light and sound. While repetitive evocations of the sea’s unknowable mysteries (via shots of floating waves amidst the darkness of the ocean) eventually become ponderous, the film nonetheless suggests the impossibility of representing the lumbering multiplicity of the ship and the sea through any one instant. For each of these films, time and space become tactile.

Taken separately, Dean’s Kodak and Edwin Parker could similarly be classified as documentaries of a place and a person, respectively, though the focus is more on capturing an elusive, ephemeral process than a subject or mood. Kodak records the machinations of producing film stock in one of the last Kodak factories in France to do so. Moving through different areas of the plant, Kodak is an industrial spectacle of sound and light beaming across and through the dust and debris of the soon-to-be-closed facility. Kodak found an evocative companion piece in Sarah Christman’s short film 7285, a delicate meditation on fear and loss, shot (and named for) a recently discontinued film stock. The leftover fragments of a dying industry were seen further in Kevin Jerome Everson’s Regal Unlimited, a metaphorical documentation of a junkyard’s transformation of several family sedans into unified, sculptural waste.

Dean’s Edwin Parker is an extraordinary portrait of artist Cy Twombly as he sits in his studio toying with objects and observing the world around him. Dean’s film bears witness to a sort of quotidian mundanity of artistic activity that overflows with life. Somewhat uncomfortably, Mike Holboom’s Scrapbook pieces together a remarkable vision of “audacious autistic” Donna Washington as she observes historical footage of herself from her time in Ohio’s Broadview Developmental Center in 1967. The rather amazing footage of daily activities offers a mode of remembrance, even when, for the subjects, the memories have faded. Holboom shows a deep sensitivity and thoughtfulness concerning the pitfalls of historical distance and fading memories, but Scrapbook can’t quite overcome an unpleasant sense of intrusion.

Questions of history, memory, and daily life resonated throughout Simone Rapisarda Casanova’s bold and daring The Creation of Meaning, which won the festival’s top prize. Set in the Tuscan Alps, the film finds the location’s political past haunting the evocative landscape, where German soldiers massacred hundreds of civilians during World War II. Through a number of extended sequences, The Creation of Meaning locates dazzling moments when hysterical absurdity backgrounds the quotidian (think: talk radio) and asks how the collision of past, present, and future can shape political formations that remain invested in the work of everyday life.

The Creation of Meaning was a fitting winner for AAFF, as the film’s insistence on the active role of history is mirrored by the festival’s approach. Aside from being a showcase of exciting new work, AAFF features a number of archival screenings, which stood out as some of the most exciting programs at AAFF this year. In particular, AAFF juror Joanna Raczynska, the assistant curator in Film at the National Gallery of Art, showcased nine eastern European films from the 1970s that were part of her and Ksenya Gurshtein’s wildly ambitious eleven program series “Artists, Amateurs, and Alternative Spaces: Experimental Cinema in Eastern Europe, 1960–1990.” Whether documenting the work of artists’ collectives or providing structural film experiments, the program was tremendously exciting not only for its rarity but also for its relevance. Zelimir Zilnik’s terrific Black Film (1971) shows Zilnik attempting to “solve the problem of homelessness” by picking people off the street and bringing them in his house to live. In proposing his solution to everyday citizens, the social ramifications become as bitingly funny as they are enormously distressing. If this small selection of films is any indication, Racynska and Gurshstein’s series offers an essential discovery of some amazing films.

Another fantastic retrospective program was brought to AAFF from New York’s Museum of the Moving Image. “Computer Age: Early Computer Movies , 1952–1987,” curated by Leo Goldsmith and Gregory Zinman, offered a thrilling survey of the history of computer films, including Nam June Paik’s Digital Experiments at Bell Labs, Pierre Hébert’s overwhelming Around Perception, James Whitney’s astonishing Lapis, several baffling music videos and television advertisements, and, most notably, Barbara Hammer’s No No Nooky TV (1987), a film so rich and complex regarding the potential erotics of human relationships with technology that it practically makes every other film concerning the subject a moot point. Despite being a truncated version of the full program presented in New York, the two-program “Computer Age” presented at AAFF gave audiences a wide-ranging, ambitious, and eye-opening survey of where contemporary digital technologies got their hand-crafted, experimental start.

No No Nooky T.V. and Other Humorous Films by barbarahammer.com from barbara hammer on Vimeo.

“Computer Age” found its contemporary counterpart in one of the great series of films at AAFF 2015, Harun Farocki’s Parallel I–IV. Investigating the histories of representation and narrative convention in various video games, Farocki’s series goes behind the scenes to look at the construction and manipulation of video game code in the service of creating virtual, increasing realistic worlds. However, Farocki finds the games increasingly at odds with digital declarations of freedom, agency, and individuality. Farocki’s rigorous formalism and dry voiceover begins with a sly tongue-in-cheek sense of humor before eventually transforming into ominous and damning. By following subtle adjustments over the course of time, the political and personal implications of manufacturing a representational world become increasingly clear. As format and technology shift, so too do the potential consequences.

By the end of AAFF, the impetus was no longer on the screen to screech out about its transformation from one form, shape, or medium to the next. What Farocki taught was that its up to engaged viewers and artists to carefully track changes that underpin the world we live in.