Georgian on My Mind: Tangerines 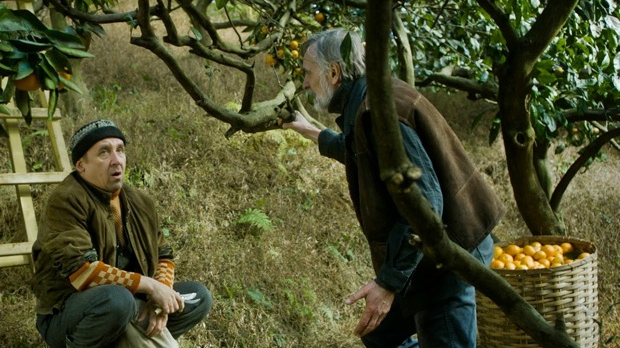 A four-hander of a chamber play shot quickly in a single location in the lush, mountainous Georgian region of Guria, Zaza Urushadze’s Tangerines was a surprise nominee for best foreign language film at the Oscars. The Georgian director’s third feature is meticulously crafted. Composer Nias Diasamidze’s repetitive sad strings are appropriate for a story where winning is implausible. Ongoing slight, smooth camera movements reframe relationships and offset the threat of stasis. Urushadze and ace DP Rein Kotov go for strong, contrasting lighting effects not only for their beauty in this widescreen picture, but as another weapon against inertia. Small and dynamic are not mutually exclusive.

Most of the film takes place in the wooden cottage occupied solely by Ivo (Lembit Ulfsak, a legend in his native Estonia), a simple but dignified elderly carpenter with high principles, and in a one-room structure he calls his factory. He works making crates for the other ethnic Estonian — in fact, the only other person — still around in this enclave, his friend Margus (Elmo Nuganen), whose tangerine harvest is jeopardized by the shortage of manpower. 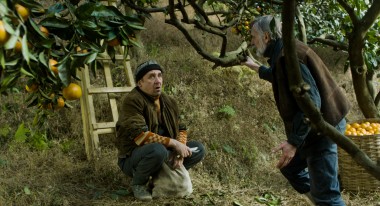 Ivo’s family have been more or less exiled to an ancestral homeland they barely know. They are collateral damage in the impending war between the territory of Abkhazia (for which Guria is subbing), where his ancestors have lived and labored for the past century, and which is ready to fight for independence from the new Republic of Georgia, itself only recently divorced from the former Soviet Union. (When war does break out in 1992, the human cost is 20,000 lives, the economic cost mounting to this day in what is considered a pariah nation. At the time, the conflict in Bosnia stole this strife’s thunder.) For political reasons, the Russians support the Abkhaz and recruit Chechen mercenaries to help fight the Georgians.

Not too many of us are well-versed in Estonian literature, but to fully appreciate Tangerines, you need to know about the great author Anton Hansen Tammsaare (1878-1940), who wrote the three-volume “Truth and Justice” between 1926-33, when dictators were rising up in Europe. The son of a farmer, he felt that cosmopolitanism results in a loss of moral sensibility, but that farmers and intellectuals from rural backgrounds hold onto it. Ivo and Margus are characters drawn from a Tammsaare template. The two men risk their lives nursing soldiers from both sides back to health.

A Christian Georgian actor in civilian life, the patriot Niko (Mikheil Meskhi) and Ahmed (Giorgi Nakhashidze) — a Chechen Muslim who needs the good pay “for my family” — stay in Ivo’s modest home, where they are treated with the courtesies a maître d’ showers on guests in a restaurant. That might be pushing it: He serves them tea, bread, and whatever is around, but oh so politely. The men are the only survivors — badly injured — of a road battle that killed three of their comrades. To hide the damage, the two men and the Estonian doctor they call in push the demolished Georgian van over a cliff.

The threat of retaliation from Georgians, Chechens, and ultimately Russians who casually drop in to inspect the premises is worrisome — not to mention that the two patients are so infused with nationalist and religious hatred that Ivo must watch them carefully to avoid their doing each other in. Their gratitude to their savior, who would be killed if they were discovered (unless they pretend they play for the other team), saves the day. The tremendous animosity, though, builds even while they heal. 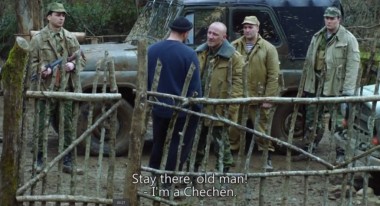 What distinguishes this antiwar film from most others is that, as the danger of visiting soldiers increases, the enmity between the men gradually subsides until they become more like humans sharing a dilemma than venomous rivals indoctrinated by institutions they are blindly loyal to. Although Ivo can be stern and commanding when necessary — certainly when he catches his guests staring a little too long at the photograph of his gorgeous granddaughter — his ethical purity rubs off on them. The former combatants start joking around. (The physically comic Margus is a leavening source of light laughter, and Ivo has a wickedly dry sense of humor.)

Unfortunately, life is not so simple. Here the dining table is the center of activity. Ahmed complains and stares Niko down. The latter’s frequent fiddling with an unraveled audiotape delivers a poignant payoff. Wars are not generally fought in such intimate circumstances. Margus’s orchard, outside his own place, is the most visible casualty of war. Shots of the orange fruit against the large, arching brown branches and dense green leaves are a respite from Ivo’s house, fraught as it is with tension. But the tangerines are doomed, and they can’t mask the fact that many young men we do not see are being killed and maimed while these players on an isolated back road are working out their personal antagonism.

Thankfully, the screenplay defies predictability, and Urushadze omits enough personal information about the hosts that they maintain an air of unforced mystery. In fact, they are backdrops. Who or what takes center stage? (The last word is intended: A strong sense of theater does seep through.) The two soldiers, naturally, and the oscillating destructive and constructive paths they take. That enables us to pick and choose what we take from the film.