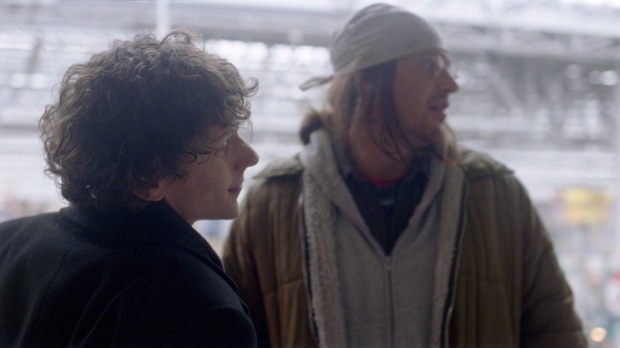 The End of the Tour

A slew of festival favorites are set to make their New York premieres at the 2015 edition of BAMcinemaFest, which will open with James Ponsoldt’s The End of The Tour and close with Sean Baker’s Tangerine. Alex Ross Perry’s Berlinale premiere Queen of Earth will serve as Centerpiece at the festival, which runs from June 17 – 28 in Fort Greene. Aside from the Sundance and SXSW holdovers, notable selections include Jem Cohen’s Counting; Nathan Silver’s Stinking Heaven; Here Come the Videofreex, a documentary about a 1960s and 70s video collective; the world premiere of Jason and Shirley, a reimagining of Portrait of Jason; and Henry Gamble’s Birthday Party, Stephen Cone’s latest, which will have its world premiere at the Maryland Film Festival this weekend. Check out the full features lineup is below.

In a cutthroat future metropolis, middle-aged single mother Gwen (co-writer Jacqueline Kim) loses her job at a biotech corporation that places its customers in desirable new bodies. Alienated from her family and unemployable in a youth-obsessed marketplace, she worries about affording her gifted daughter’s prep-school tuition and contemplates undergoing the identity-altering procedure she was once hired to sell. A Special Jury Award winner at Sundance, this visually inventive, feminist take on dystopian sci-fi delves deep into familial sacrifice, the anxiety of aging, and technology’s ever-tightening grip on modern selfhood.

The art of political debate reached sublimely rancorous new heights when conservative William F. Buckley, Jr. and liberal Gore Vidal covered the 1968 Republican and Democratic National Conventions for ABC. Amid the decade’s escalating culture wars, two of America’s foremost intellectuals trained their rapid-fire wits and patrician accents on the hot-button issues of the day, resulting in the most venomous verbal duel in broadcast history. Mixing archival footage, juicy biographical detail, and reflections from Dick Cavett, Christopher Hitchens, and others, this briskly paced documentary revisits the pop-culture watershed that spawned our age of polarized punditry. A Magnolia Pictures release.

The members of Brooklyn speed-metal band Unlocking the Truth perform on the street in Times Square and spend every spare minute making music—when they aren’t attending seventh grade. After videos of the band’s wild performances go viral, they land a 70-year-old manager and a $1.8 million contract with Sony. But as the boys become professional musicians and enter into adulthood, they must learn the realities of life in a band. Meyer’s funny, empathetic documentary offers a behind-the-scenes look at today’s music industry and a group of kids at the critical moment between recess and rock star.

A long-unsung hero of contemporary stand-up, Barry Crimmins blazed a trail through Boston’s 1980s comedy-club circuit, excoriating Reagan-era conservatism with his incendiary brand of social satire. In this loving documentary portrait, Crimmins’ protégé Bobcat Goldthwait grapples with his mentor’s ribald wit and prickly persona—and ultimately unravels a devastating account of the tragedy that led Crimmins to commit himself to political activism mid-career. Featuring interviews with admirers like Margaret Cho and Marc Maron, this tribute to an influential firebrand illuminates how trauma and outrage can fuel great comedy.

When two wide-eyed eight-year-old boys stumble upon an abandoned patrol car in the woods, their instinct for mischief overwhelms any urge for caution. Soon the boys are off to the races, gunning the car down back roads and basking in their seeming invincibility. Little do they know, a rotten sheriff (a sinister, scummy Kevin Bacon) with a deadly secret is on a desperate hunt for his car—and will get it back at any cost. As the boys face increasingly disturbing danger, Watts’ masterful second feature culminates in a cat-and-mouse standoff for the ages. A Focus World release.

Veteran New York filmmaker Jem Cohen (We Have an Anchor, Next Wave 2013; Museum Hours, BAMcinemaFest 2013) is a master at evoking the fabric of urban life with richly textured combinations of sound and image. His latest work weaves 15 chapters—including snapshots of New York, Moscow, Istanbul, and more of the world’s metropolises—into a tapestry that captures a range of ephemeral moments with an elegiac tenderness, from street protests to flickering lights and the movement of clouds across the sky. Cohen, who has noted that the film initially began in response to the death of cine-essay pioneer Chris Marker, emerges as both rigorous documentarian and consummate flaneur. A Cinema Guild release.

In this follow-up to his tour-de-force debut, In the Family, writer-director Patrick Wang navigates the quiet undercurrents of human behavior, following a married couple in the aftermath of their newborn son’s death. As the family grapples with tragedy, both parents and their two precocious children are divided by their own personal grief—a delicate state disrupted by the husband’s troubled, long-estranged daughter from a previous relationship. Based on Leah Hager Cohen’s acclaimed novel, this masterfully controlled ensemble drama registers the intricacies of unspoken heartbreak with empathy and precision.

Set over 24 climactic hours around a suburban pool party, this minutely observed character study follows the 17-year-old son of an evangelical preacher as he comes to terms with the gap between spiritual faith and carnal desire. As day turns to night, long-held secrets come to light and tightly controlled lives begin to unravel. Featuring a delicately interwoven ensemble, lyrical cinematography, and a lush synth score, Henry Gamble’s Birthday Party turns a sympathetic eye toward the facades we all create.

In the 1960s and 70s the Videofreex blazed a trail for truly alternative media. Tapping into a treasure trove of recently restored Videofreex tapes, including interviews with icons like Fred Hampton and Abbie Hoffman, Here Come the Videofreex charts the path of this underground video collective, from their time traveling the countercultural beat for CBS News to the establishment of their radically local pirate television station in Lanesville, New York. Directors Nealon and Raskin capture the enthusiasm of the Videofreex as they attempted to harness the democratic power of portable video.

In this taut psychological thriller by Karyn Kusama (Girlfight, Jennifer’s Body), the tension is palpable when Will shows up at his ex-wife Eden’s dinner party. The pair’s tragic past haunts an equally spooky present: amid Eden’s suspicious behavior and her mysterious house guests, Will becomes convinced that his invitation was extended with a hidden agenda. Unfolding over one dark evening in the Hollywood Hills, The Invitation blurs layers of mounting paranoia, mystery, and horror until both Will—and the audience—are unsure which threats are real or imagined. A Drafthouse Films release.

In 1967, legendary avant-garde filmmaker Shirley Clarke made one of her simplest and most radical films, a feature-length interview of downtown entertainer, hustler, and raconteur Jason Holliday called Portrait of Jason. In his new lo-fi film, director Stephen Winter goes on to imagine what happened when the cameras weren’t rolling, casting downtown theater veteran Jack Waters and author-activist Sarah Schulman in the lead roles. Winter plunges the viewer into the dizzying power struggle between filmmaker and subject, as the increasingly inebriated Jason battles to turn the tables on his interlocutors and they seek to challenge his carefully constructed persona.

When free-spirited Krisha (Krisha Fairchild, director Shults’ real-life aunt) returns to Texas for a holiday gathering, it doesn’t take long for tensions to mount and nerves to unravel in this dizzying portrait of a woman—and family—on the verge. A deeply personal debut feature, simmering with bravado camerawork (echoing Shults’ mentor Terrence Malick), a propulsive score, and breakout performances from a largely nonprofessional cast, Krisha announces a remarkable new talent in homegrown independent cinema. Winner of the Grand Jury and Audience Awards at SXSW.

Fort Greene artist Freddy (Silva, Crystal Fairy, BAMcinemaFest 2013) enlists his best friend (Kristen Wiig) to have a baby with his boyfriend (TV on the Radio’s Tunde Adebimpe). But as they begin the process of creating their picture-perfect modern Brooklyn family, a neighborhood eccentric becomes a menacing presence in the trio’s lives. Winner of the Berlinale’s Teddy Award, this offbeat genre-bender deliberately transgresses expectations as it builds to its shocking conclusion. Released by The Orchard.

This revealing documentary offers an unprecedented glimpse into the lives of a group of registered sex offenders living in an isolated Florida community. Allowing its subjects the opportunity to recount gut-wrenching personal stories unfiltered, Pervert Parkmakes a divisive choice: empathy over judgment. The debut feature from husband-and-wife team Frida and Lasse Barkfors is a compassionate portrait of society’s most stigmatized pariahs and their struggle to break the cycle of silence and sexual abuse.

An engrossing exposé of Mormon fringe group the Fundamentalist Church of Jesus Christ Latter Day Saints (FLDS), this scorching documentary captures tyrannical leader Warren Jeffs’ journey from rising religious fanatic to convicted felon. Academy Award nominee Amy Berg (Deliver Us from Evil, West of Memphis) interviews ex-members of the isolated polygamist community who share brutal accounts of sexual abuse and the psychological control Jeffs once wielded—and in some cases still does. Featuring interviews with investigative author Jon Krakauer (Under the Banner of Heaven, Into the Wild) and a solemn, beautiful score by Nick Cave and Warren Ellis, Prophet’s Prey confronts the trauma FLDS fostered, condemning its leader and his manipulation of religion, obedience, and power. A Showtime Documentary Films release.

Winner of the Sundance Documentary Jury Prize for World Cinema, this harrowing film from first-time director Chad Gracia examines the lasting effects of the Chernobyl disaster through the eyes of Ukrainian artist Fedor Alexandrovich, who was four years old on that fateful day. Risking their lives to gain unprecedented access to the site and get closer to the truth, Alexandrovich and the filmmakers uncover the mystery of the Duga, a Soviet radio antenna with frightening abilities, and reveal new layers of the revolution’s painful history.

Set in the early 90s and shot on lo-fi video of the era, this raw and restless ensemble piece—which features a cast of Brooklyn indie film stalwarts—goes inside the walls of a suburban safe house for recovering addicts, where rituals and reenactments serve as group therapy and residents share a boundless intimacy. When the arrival of a mysterious new member (I Used to Be Darker’s Hannah Gross) disrupts order at the commune, the ever-encroaching handheld camera bears witness to its turbulent demise.

Storyboard artist Kent Osborne is dead set on making a sequel to Joe Swanberg’s Uncle Kent, an idea that Swanberg shrugs off and Todd Rohal (The Catechism Cataclysm, BAMcinemaFest 2011) picks up, following Osborne to San Diego Comic-Con. Soon enough Osborne steadily goes off the rails amid a series of hallucinations, bizarre romantic pursuits, and delirious ramblings about engineer Ray Kurzweil’s singularity concept—and he becomes increasingly aware that the world is about to end. This ultra-meta absurdist romp won the Visions Audience Award at SXSW.

When high school teacher Sam (How I Met Your Mother’s Cobie Smulders) discovers she’s pregnant, the trajectory of her life takes an abrupt turn. Boyfriend becomes fiancé and career dreams stall as she navigates this new, unsteady terrain. When one of her best and brightest students, Jasmine (charismatic newcomer Gail Bean), confides that she’s also expecting, the pair swap insecurities and aspirations—and find the boundaries between comforter and comforted growing murkier by the day. Unexpected is a sensitive depiction of modern motherhood, addressing privilege, age, and wisdom with honesty and bite. A Film Arcade release.

Diagnosed with metastatic breast cancer in 2011, Alex Sichel turned to writing and directing as a means of coping, creating a fictional, more optimistic alter ego (tenderly portrayed by Lili Taylor) with the same prognosis. Co-director Elizabeth Giamatti documented the creative process, and together they crafted an inventive documentary-narrative hybrid that chronicles Sichel’s journey through her illness. Winner of SXSW’s Special Jury Prize for Directing, A Woman Like Me is candid, emotional, and a powerfully affecting elegy to the loss of life and art.