Nowhere To Go But Up: The 6th Annual Eastern Oregon Film Festival 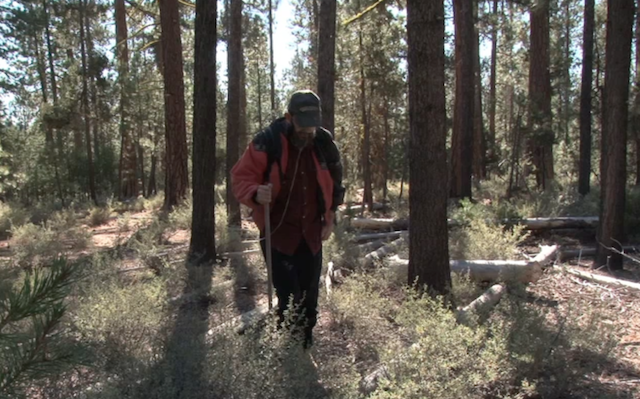 “A good movie is like a blast to the head,” growled Dusty Decker — musician, actor, purveyor of the Albino Bumblebee (goat’s milk, Jack Daniels, honey) and something of a local legend in the valley of La Grande, Oregon. His off the cuff commentary, though in jest, nonetheless proved a perfect transition from bb gun toting and hatchet throwing to a roundtable discussion on independent film beneath the towering trees of his backyard. We were all there for the sixth annual Eastern Oregon Film Festival, and the conversation began with the occasion.

Just as any old chum can go out and shoot a film nowadays, those with enough willpower and elbow grease can build a film festival from the ground up — so the saying goes. Both clauses are theoretically true enough, but to create an enduring film or festival, of course, means something else entirely. Now closer to their 10th anniversary than the inaugural edition, programmers (and filmmakers) Ian Clark and Ben Morgan were intent on considering the ultimate purpose and trajectory of a local festival such as EOFF. With such limited bandwidth, how could they expand the festival’s reach both year-round in the community and at large? Clark addressed the latter concern by partnering with Filmmaker to create an online supplement to this year’s program, showcasing films that were well in line with his tastes, but perhaps not of the average inhabitant of La Grande.

That’s not to say that the uniformly lovely, laid back residents of this verdant town are wont to turn their noses up at much. One of the most exciting and inspiring aspects of EOFF is the fervor with which the community embraces the annual event. You don’t have to look hard to see evidence of said support — beyond the widely worn festival merchandise, all it takes is to attend a screening.

On a Friday night, midway through the three day festival, a local man named Alan stood next to Morgan as he introduced the Israeli thriller, The Man in the Wall. Alan, turns out, was so taken with last year’s opening night film, Bending Steel, that he began making trips to Coney Island to visit the film’s subject, eventually trying his own hand at the strong man game. He then proceeded to tear a deck of cards in half, before graduating to horseshoes and nails, which he bent, teeth gritting, against his muscular body. “A year ago,” he smiled, “I was just a guy going to the movies.”

This particular movie we were seated for was one that warranted admiration for its conceptual ambition, if not the ultimate execution. Set entirely in a second floor apartment in Tel Aviv, The Man in the Wall consists of several single take sections that unfold over the course of one evening into early morning. Bourgeois thirty-something Shir wakes up from a nap to find a neighbor at the door with her dog. Her husband Rami, it would seem, vanished into thin air while taking the mutt for a walk in the rain. The somewhat predictable procedural affairs soon ensue — the police arrive, then her lover, then (oops) her husband’s best friend — but director Evgeny Ruman keeps the exchanges tight and tense enough to sustain your intrigue as to Rami’s whereabouts, offering the slightest hint of exposition only as needed. When the big reveal finally comes, its heavy handedness is a downer, even more so compared to the film’s close, which favors a subtlety that haunts.

The only psychological drama in the program — barring Approaching the Elephant, which screened on a killer double bill with Elizabeth Lo’s Hotel 22 — The Man in the Wall nonetheless plays to the versatility of Morgan and Clark’s selections, which are still careful enough to account for the more hometown friendly fare. One of which, Sara Dosa’s The Last Season, received surprising little play on the circuit last year, given its indelible characters and creeping pathos.

The documentary primarily concerns the unlikely bond between two mushroom hunters cum war veterans in small town Central Oregon. Each season, Kouy, a former Khmer Freedom Fighter in Cambodia, leaves behind his daughter in California to root around for lucrative Matsutake mushrooms in the typically damp Oregonian forests. Through casually composed interviews, we learn that the 40-something Kouy has been adopted by the irascible Vietnam vet and recovering alcoholic Roger, and his wisecracking, truth-telling wife, Theresa, who are both in their 70s. More than just a triangular odd couple, The Last Season modestly presents a trio of lives in flux, in both socioeconomic and more literal terms, as the two men struggle in service of work that is not always worth the sacrifice.

Technically speaking, you don’t get more local than the work-in-progress screening of Clark’s A Morning Light, which was shot in and around La Grande, and yet the film’s eerie, sci-fi tinged tone practically dissociates the visuals from the festival’s backyard. Short on dialogue and context, A Morning Light pairs filmmakers Zach Weintraub and Celia Rowlson-Hall as an eventual couple, who take to camping across Union County, encountering an ominous pair of tree cutting neighbors (one of whom is played by Decker) and supernatural occurrences. It’s a slow-burning narrative, one that is content to linger on the more alien attributes of nature (praying mantises feature prominently) than overt SFX, and ultimately toys with the grammatical aspects of home invasion, supposing we’re most vulnerable when we least suspect it.

At once the most accomplished and eclectic block of shorts I’ve encountered in recent memory, the regional specificity of the “Best of the Northwest Filmmakers” program adopted a suitably blanket approach. Condensed and adapted from the festival of the same name by Portland’s Northwest Film Center programmer Thomas Phillipson, the shorts range from aurally animated jalopies in the Vancouver-set Rez Cars to the heartbreaking reflections of a homeless teen in Seattle in The Beast Inside to the uplifting trade of portraiture in Livingston, Montana in Painting John. Another Vancouver title, Anxious Oswald Greene, which follows its titular character a hundred flights in the sky to his dentist’s to rid himself of the (also titular) affliction of anxiety, is the best Tim Burton film of the last decade and then some.

After the screening, as I was left wondering why I’d never been introduced to one of the aforementioned films on the major festival circuit, one of EOFF’s board members offered up a tour of the dilapidated Liberty Theater next door. We followed him through the torn floor boards up to the old projection booth and balcony as he explained EOFF’s plan to renovate the Vaudeville digs within the next three years. It’s an ambitious undertaking to be sure, but one that’s necessary for the future of the festival and La Grande’s musically inclined community, as it would function as a stopover on the well traversed touring trail between Boise and Portland.

As it stands now, the festival’s main venue is the Granada, a centrally located theater with an arthouse marquee but a multiplex sensibility. In order to make way for the second weekend of the latest Avengers flick, the opening night film Planetary was relegated to the smallest of the three theaters as a crowd of 50 dawdled outside. Disheartening, yes, but I’ve little doubt in its succeeding years that EOFF, with all its gusto, intellect and well-grooming, will rise above of any blockbuster opening.