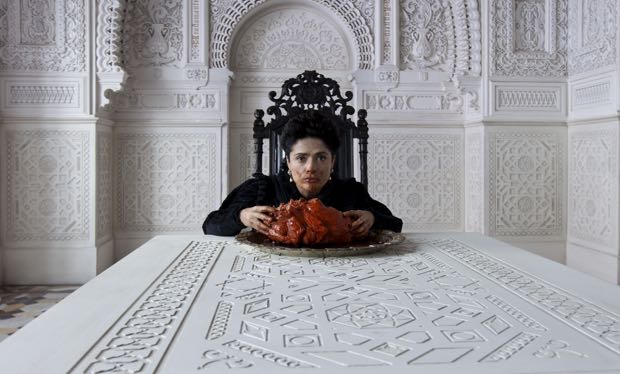 by Ariston Anderson
in Actors, Festivals & Events, Interviews
on May 22, 2015

Salma Hayek rarely picks up her cell phone when the number is unlisted. But one day she did so while driving around Los Angeles, and the man on the other end was Italian director Matteo Garrone. Having been introduced to modern Italian cinema by her friend Valeria Golina, Hayek was flabbergasted.

Garrone’s films Gomorrah and Reality were two of her favorite recent pictures. Not only that, but Garrone was offering her the role in a period film bringing to life the tales of 17th century Neapolitan scribe Giambattista Basile. She would play the role of a Spanish queen, the film would be told from the point of view of women, and there would be no auditions or begging for the role. Hayek thought it was a prank call, too good to be true. She asked the man on the other end if he was pulling her leg. “No, what do you mean a joke?” answered Garrone. “No, it’s not a comedy, it’s a serious film.”

Hayek took the part, bringing to life one of Tale of Tales‘ most vivid characters: a queen who will go to any length to have a son, and subsequently do anything she can to keep him all to herself.  Filmmaker spoke to Hayek in Cannes about how she brought the character to life, her own take on fairytales, and why she’ll soon be the one in the director’s chair.

Filmmaker: Why was this a dream role for you?

Hayek: You have to understand two things about this. Number one, when I started out, I always got to play the maid, the stripper. The closest I ever got to playing a queen was the queen of the drug cartel in Savages. And I love period pieces. I watch every period movie and series. As an actor you think, well, what are the chances that they’re going to put a Mexican in Europe in the 17th century? At my age, you’re sort of resigned to the fact that you’ll never wear those dresses. At 48, they don’t even give me a scientist or a lawyer role.

Filmmaker: What was your collaboration like working with Garrone?

Hayek: People are saying this film is very different and the language is very different because in this film he uses the language of dreams and the subconscious. He distracts you with exuberant images that are very exciting for the senses. What is very consistent is in watching a film of Matteo’s or working on a film of Matteo’s, you never know where he is going to take you in every scene, every story.

When you get to the set every day it’s completely different. It’s exactly the process of an artist that paints on canvas, and this indeed is his background. Everything is just colors and pencils [to him]. It starts with a sketch, then he starts painting and then changes the colors and the form. Then he sees something that comes out takes it in a new direction. It’s exactly the process of painting.

It’s mad. You arrive, you don’t know when you’re going to start shooting, because he might be painting with the lighting and set design for a long time. Sometimes he says, “Use all this space and do the lines.” There’s two characters. “You don’t move, you use the space.” How? “I don’t know, use the space, let me see!” OK. You start using the space, and then he says, “That was fantastic. I really loved that one. Now, sit down, don’t move. Do the scene again.” And then ‘That’s it,” and then he goes in that direction.

There were times where he said, “No, the light is wrong. It’s too yellow. It’s not the right emotion for the scene.” One time, during the earrings scene, I kid you not, we were trying to please him — the props people, everyone — for hours. And he says finally, “I understand now, it’s the wrong location. It’s too big, I need something more intimate and dark.” And we move locations and start the process somewhere else.

Filmmaker: Could you relate to the Queen’s motherly protectiveness?

In my head I made a completely different character. To me, I made her very likeable. I would give different takes. We tried different things, starting with melodrama. When I saw the movie, she’s very cold. You don’t care about this woman because she doesn’t care about anything else. When you see the whole movie, it’s genius because it was right — otherwise everybody’s the same. I didn’t know I was a villain until I saw the movie here in Cannes!

Filmmaker: Would you consider your own life a fairytale?

Hayek: My life is like a good fairytale where I found the great prince that came and rescued me, and he’s gorgeous and loves me, and I had a child, and I do what I like for a living. But you might not see the fairytale like how I see it. Because a lot of people think, oh she’s an actress and she has a privileged life, she gets to wear all of these clothes.

The clothes, to me, it’s not that exciting. I shouldn’t be saying this, but the clothes can be such a pain in the neck. It’s not part of  my fairytale. The fact that I have a good marriage, this is the real fairytale. Money can’t buy that. Nothing can. There are many rich people in the world, but there is a very small percentage of good marriages in the world. Rich people, they’re everywhere, look around.

Filmmaker: Do you desire to work again as a director?

Hayek: Yes, what I love the most is storytelling. I think this is one of my greatest passions, but I’m not going to do it until a little bit later, until my child gets older. I directed one film, for television, and it was nirvana. I’ve never been so happy.

I have produced a couple of things for Showtime. The president of Showtime at the time had been in a couple of the creative meetings, and he pulled me to the side. I thought I was going to get fired because it was in the middle of a fight. And he said, “You know what, you’re not really a producer.” And I thought, oh for sure I’m going to get fired. He goes, “You’re not even really an actress,” and then I thought OK, now he’s getting insulting. He said, “You’re a director. Your brain works as a director – you think like a director.”

I thought it was going to be so difficult. Directors are always complaining, saying, oh it’s such a hard job. That’s the directors making themselves more interesting or something. It was so easy. It was really easy. Not enough women are directors. It breaks my heart because directing, it’s more innate to women. It’s like in the household the men are more, to me, naturally [in] the role of the producer. They’re pragmatic, they know how to get things. The director has to be nourishing to the whole team, bringing the team together. It’s more human relations, it’s empathy for your characters, it’s creativity, it’s vision. You are mothering a vision. We do it in our belly. It starts with a little seed and it is in our nature to create one thing that becomes alive. I think instinctively, we are probably more engineered, more in tune for this job. And look at Cannes: just two women in competition.