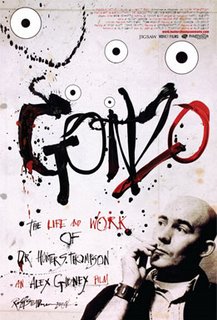 On Feb. 20, 2005 the grandfather of Gonzo journalism, Dr. Hunter S. Thompson, was walking around his snow covered compound in Woody Creek, Colorado when he decided to point the gun he was carrying to his head and pull the trigger. For a man who lived his life with a glass of Wild Turkey in one hand and a hand gun in the other it was a fitting end. Now doc filmmaker Alex Gibney recounts Thompson’s roller-coaster life and how his intoxicating prose changed journalism forever with Gonzo: The Life and Work of Dr. Hunter S. Thompson.

Blessed with volumes of letters, photos, tape recordings and videos from the Thompson estate, Gibney holds nothing back as he pieces together Dr. Gonzo’s life with the help of Johnny Depp‘s narration and colorful interviews from people who crossed Thompson’s path like Jann Wenner, George McGovern, Jimmy Buffett and Tom Wolfe. Though some of the material covered is repetitive from earlier docs on Thompson’s life, Gibney’s attention to detail weaves a moving story that is as much enlightening as it is funny.

Some of the most entertaining and revealing footage is from a BBC doc that can be found in its entirety on the Criterion Collection’s disc of Terry Gilliam‘s Fear and Loathing in Las Vegas. Shot in the mid ’70s at the height of Thompson’s fame we find him tucked away at Woody Creek shooting and snorting. But at a moment of clarity Thompson reveals his disdain for what he’s become: a journalist whose gone from covering the story to becoming it. A theme that Gibney weaves throughout the film.

With the success of Hell’s Angeles, his expose on the world of the biker gang which ended with them jumping him, followed by his seminal book Fear and Loathing in Las Vegas where the drawings of Ralph Steadman heighten the bizarre “trip,” Thompson becomes a star journalist and Gibney shows Thompson can’t handle it as he has to live up to his alter ego from Fear and Loathing, Raoul Duke, ending many relationships, including his first marriage.

When Rolling Stone puts him on the ’72 campaign trail he disassembles political coverage and puts in his gonzo traits by starting rumors that get picked up on the wire and becomes a fixture for the candidates interested in getting the youth vote. But by the time he goes out to cover the Ali-Foreman fight in Zaire in ’74 he’s lost the fire and hits rock bottom. Floating in a pool with no sense of reality during the climax of one of the greatest fights in history, he returns home with no story.

The third act of the film is Thompson’s revival of sorts in the mainstream as a new generation discovers his work, but without that drive he had in the ’70s the ride isn’t that strange and wonderful anymore and he takes his own life. Gibney lets the facts tell the story and never tries to romanticize or put a poetic twist on it, in many ways Thompson has done that for him.

The good doctor states it best in Hell’s Angles:

“The Edge… the only people who know where it is are the ones who’ve gone over.”