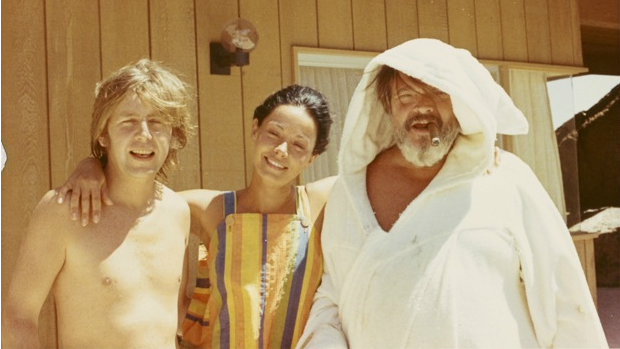 Cinematographer Gary Graver, Oja Kodar and Orson Welles on the set of The Other Side of the Wind (Photo by Frank Marshall)

At first, I viewed the Indiegogo campaign to help finish Orson Welles’ last film as a desperate attempt to solve a troubled situation. I was hauling in all my feelings about the Kickstarter saturation that has infected indie film culture. Everyone and their mother is crowdfunding their films — now the late Orson Welles? It felt like a violation against his legacy and made me incredibly sad. After all of this time, Orson Welles still can’t raise money the “normal” way?! But now, after much thought and digging, I see the campaign as a triumphant way to actively and symbolically help free the work of Orson Welles from the influence of the money people that contaminated it — freeing him to finally be in control, even after his death.

In 1940, at the age of 25, Orson Welles was given full control over a movie, something unprecedented. With that freedom, both artistic and financial, he made what many people consider the greatest movie of all time. What did he get for this feat? Nearly constant financial struggle, compromise and a lifetime of watching other people finish his films against his wishes. “I’ve spent too much energy on things that have nothing to do with making a movie,” he said. “It’s about 2% moviemaking and 98% hustling. That’s no way to spend a life.”

It’s become a kind of narrative. “Such a shame what they did to Welles,” we say while fantasizing about someone finding the lost reels of The Magnificent Ambersons in an attic somewhere. But how would we label Orson Welles then, should that injustice be righted? Don’t we need him to hold that place on our Masters of Cinema shelf, right under “Failed Genius”? It kind of feels that way. The allure of the lost masterpiece will always shine brighter in our imagination than it will up there on that screen in all its restored glory. There are no greater scenes in history than those senselessly tossed out with the studio garbage, right? Let’s all admit it’s best if we never know the answers to such questions.

Way ahead of its time in terms of style and execution, The Other Side of the Wind was going to be Welles’ last, totally unique, crazy, enigmatically autobiographical masterwork. To illustrate the state of this mostly unedited film that Welles and his loyal cast and crew finished shooting in the mid ’70s, consider this: a book was just published by Josh Karp called Orson Welles’s Last Movie. Only half of the book is about the making of the movie. The other half is about the labyrinthine legal struggles and myriad failed attempts to secure completion money that have plagued this supposed masterpiece-waiting-to-happen.

If you’re like me, at age 14 you sent away for a VHS copy of the AFI tribute to Orson Welles just to see two scenes from this, the most legendary of unseen movies. Since then, you’ve had your hopes raised on numerous occasions as rumors swelled that it was finally going to be edited and released, only to have those hopes dashed as legal or personal issues halted these attempts over and over again. And, if you’re like me, you’re suspicious when word spread that there’s finally real reason for hope now. Before we throw hope to “the wind” we need some serious questions answered.

What makes this deal different from other deals in the past that have fallen through?

After many years of hard work, with the help of fellow producers Jens Koethner Kaul and Frank Marshall (who worked on the film as a young man), Filip Jan Rymsza did something that many have failed to do. He brought everyone with a vested interest together, gently removed all foreign legal entanglements and secured chain of title (a crucial legal step). Perhaps most importantly, he’s done this with a true passion for this film, with Welles’ vision of it held in utmost regard. “I tried to understand what the approaches to it have been before, where people have failed, looking at it almost like a chess player,” says Rymsza.

“I just knew that one day the right people would come. I knew instantly that these were the right people because they were saying the right things,” Welles’ daughter, Beatrice, told me. “Filip is extraordinary. He has worked so hard putting this all together. We really have a team now. We all have the same goal.”

It’s been said that Ms. Welles killed the previous hopeful deal to finish Wind. The reasons vary, from her holding out for more money to her having no interest in finishing a film staring Oja Kodar, Welles’ creative partner, mistress and co-writer. Untrue, according to Welles: she wasn’t happy because the company making the deal, Showtime, didn’t want to (or couldn’t) clear up enough rights to get the negative of the film out of holding in France. They were satisfied with attempting to finish the film from the work print. “I thought they were doing a huge disservice to it,” says Rymsza. “I couldn’t believe that was the approach. The work print wasn’t even all the material that Welles had shot.” So perhaps Beatrice had good reason to have reservations: if that deal went through, we’d have Orson Welles’ last film edited together from an incomplete, second-generation source.

With this deal, Rymsza and company untangled the legal matters fully so they could finally get right to the negative and work with the original material, which apparently is in pristine condition.

Can anyone involved suddenly say “I don’t like where this is going. I’m pulling out,” thereby putting the kibosh on this deal?

“That’s all been worked out,” says director Peter Bogdanovich, longtime friend of Orson and one of the stars of the movie.  “Truth to tell, Oja owns the picture. Beatrice owns the right of publicity because of the name Orson Welles. But I think they’re confident now that it’s in good hands.” Everyone involved seems to have the true intentions of Orson Welles as first priority, and specifically these two women. But what if someone with the best intentions of Orson Welles at heart, upon seeing an early cut, claims that this is not what Welles would do and wants to put a stop to the editing? Can they? “No. There’s no oversight,” says Rymsza. “That was something that was very important to me, for everybody to let go. Because if one person is to fight for some kind of creative control, then everyone has to have and share that creative control. And then you have a situation in which decisions can’t be made fluidly.”

OK, then who has creative control?

The good news is that Welles cut 40 minutes of the film and left editing notes and marked-up scripts, so recently hired editor Affonso Gonçalves (Beasts of the Southern Wild, True Detective) has more than a sense of what he wanted. The bad news, of course, is that Welles, who really made his movies in the editing room, is gone. “Frank Marshall and I have worked together since he was a child and I was almost a child, so we get along very well,” Bogdanovich says. “We’ve done six or seven pictures together and never had a problem. We’re both going to decide what’s the best version. Then Oja has to see it too.” What about when decisions have to be made and there are no notes to lead the way? “Frank was there for a lot of the shooting and I was around,” says Bogdanovich. “Sometimes when Orson didn’t cut a sequence, he nevertheless picked dailies. For example, I looked at the takes Orson had picked for a sequence between John Huston and me. What he did was, he picked them and strung them together — maybe three takes of the same line, back to back. So that narrowed it down rather swiftly. In one scene, he had saved two takes of me, because I was very good in the beginning of the first one and very good at the end of the second one. In other words he’d use the first half of the first one, cut to John, then use the second half of the other take. It was very clear to me what he wanted to do.”

Why is an Indiegogo campaign necessary to raise funds to complete this movie?

Clint Eastwood, J.J. Abrams, Brett Ratner, just a few faces on the “wall of supporters” for the film, whose combined pocket change could end this campaign today. That’s a little frustrating, isn’t it? We don’t expect the random Hollywood executive to be willing to get involved, but what’s up with the well-off creative folks who love and appreciate Welles? Why isn’t someone going all-in now that the legal troubles are over?

But there are huge advantages to letting the least amount of investors with potentially conflicting interests in the door, and throwing the opportunity to the people to fund it. “This affords a certain freedom which we really wanted,” says Rymsza. “This way we could finish the film, do so without making obligations to any distributors and do it in a manner that we thought fitting to Orson. And not have it be deadline driven either: I didn’t want to have a distributor who was committed to it but was waiting for a release window. I thought we’d be doing the film a huge disservice.” This way, the only obligation is to Orson Welles, like it always should have been.

You might see the Indiegogo campaign to finance the completion of this film as a sad, post-mortem continuation of the 98% hustle that crippled Welles, but I see it as a triumphant end, an opportunity for fans and cinephiles everywhere to do what Welles wished he could do most of his life — leave the money people out of his work. That alone is cause for hope and celebration.

Some people have given much of their life to this film, namely Gary Graver and Oja Kodar. Graver was Welles’ loyal cinematographer for 15 years. Always ready and willing to shoot for him. He collapsed from exhaustion on one occasion while shooting this picture. Even after Welles died, he and Oja spent 30 years trying to get investors interested so that it could be completed. Graver sadly passed away, but Kodar seems cautiously hopeful that The Other Side will finally be done. “I’ll believe it when I see it on the screen,” she’s said. Sounds like battle fatigue, and I can understand her frustration: we’ve been down this road before. But having looked deep into it, and after speaking extensively to those in charge and involved, I am ready to throw my hope to “the wind.” We owe it to Gary Graver and the rest of the loyal V.I.S.T.O.W (Volunteers In Service To Orson Welles) crew. We owe it to Oja Kodar and the rest of the creative team and cast. But most importantly, we owe it to Orson Welles.

Maybe you’re not like me at all. Maybe Welles wasn’t your cinema hero, the reason you went to film school. If not, I’ll let another master, Jean-Luc Godard, have the final word: “May we be accursed if we forget for one second that he, alone with Griffith, one in silent days, one sound, managed to start up that marvelous little electric train…All of us will always owe him everything.”

Peter Rinaldi is a filmmaker and writer in New York City. Twitter: @peter_rinaldi