“What If I Had the Baby on the Mountain?”: Livi Newman on the Sundance Directors Lab 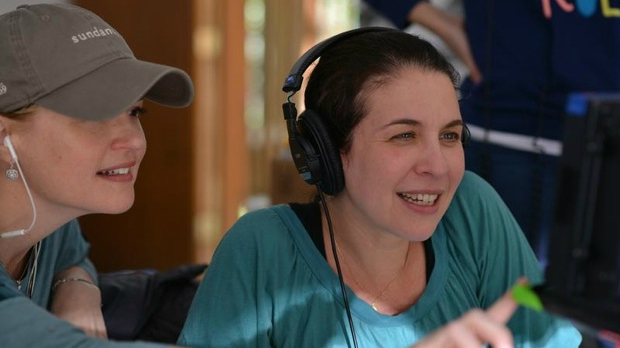 Olivia Newman is at the Sundance Directors Lab with her feature First Match, the tale of “a teenage girl from Brooklyn’s Brownsville neighborhood [who] decides that joining the all-boys high school wrestling team is the only way back to her estranged father.” She is also eight months pregnant. Below, she writes about that experience.

“What are you afraid of?” A month before the Sundance Directors Lab began, this question was posed to us via email by artistic director, Gyula Gazdag. I hadn’t yet met Gyula, and had no idea that he would eventually impart some of the deepest insights to me about my writing and directing process in the weeks to come. He was just some Hungarian director who wanted me to expose my greatest insecurities to him before we’d even met.

The truth is, at the time, my biggest fears had nothing to do with the creative process. The decision to attend the labs at eight months pregnant and leave my two-and-a-half year old son at home for a month were creating enormous anxiety for me and making it hard to focus on the creative work ahead. I’d heard how grueling the schedule was: six-day weeks, twelve to fourteen hour days, meetings with advisors scheduled during meals so little to no down time to call or Skype home. There were many meltdowns and moments of doubt. Was I being selfish leaving my son for so long? Would I be taxing myself or putting undo strain on my pregnancy? And the worst fear of all: what if I had the baby on the mountain?!

But I knew that attending the lab would be one of those once-in-a-lifetime opportunities that I would regret not exploiting to the fullest if I let fear get in the way. And I certainly didn’t want to be known as the “pregnant mom” director. I wanted to be taken as seriously as any of the other fellows for my work and get as much out of the lab as anyone. So I bottled up the personal fears and wrote to Gyula instead about my directing anxieties. Would I be able to be really present and listen to my actors (aka, keep my mouth shut)? Would I be able to come to set without preconceptions of how the scene should look or sound, and instead be open and spontaneous and trust my instincts? Would I be able to find the right visual language for my story without losing track of the emotional through line and critical story beats of each scene… blah blah blah. I looked at the list and knew I was holding back. I allowed myself to expose one personal fear: Would I waste precious shooting time running to the bathroom between takes?

I packed my bag full of vitamins, my big purple exercise ball (to sit on) and left my family with a detailed schedule for my son’s care and a list of emergency numbers. But from the minute I stepped onto the mountain, my focus began to shift. From our very first workshop with Joan Darling, we were up on our feet improvising and acting out scenes. By day three we were creating shot lists in fifteen minutes with no time to question our instincts. And by day four we were working with actors we’d never met, shooting and editing scenes in the span of eight hours, learning quickly through just doing it, trying to recognize where we had missed important story beats or opportunities to modulate actors’ performances. There was no time to question my instincts, let alone worry about how many times I had dashed off to the bathroom in the last hour. I was sucked into a vacuum of creativity where my focus was entirely on the creative process. (I also discovered that being pregnant in this context was kind of great because I could blame the spontaneous tears that came out of Joan Tewkesbury’s intense writing sessions on my hormones.)

At the end of that first week of workshops, all hundred of us — fellows, crew, actors and staff — stood in a circle on the top of the mountain. In the middle stood Larry Cesspooch, a storyteller and spiritual healer from the Ute tribe. He beat a drum and asked the Creator to guide all of our artistic projects. We’d been told it was a long Sundance tradition that Larry bless each one of us before we head into our first week of production. Larry picked up his eagle wing and sweetgrass and started towards me. But, seeing my bulging belly, he stopped and retraced his steps. He returned with a small white feather, lit the sweet grass and began tracing circles on my stomach with the feather. My baby immediately began a kicking frenzy and she did not stop moving until Larry had finished asking her to stay inside her mama’s belly a little longer so that she could finish her work. And just like that, my worst fear was gone.