Aiming for the Tectonic: Composer Keegan DeWitt on The Tribe 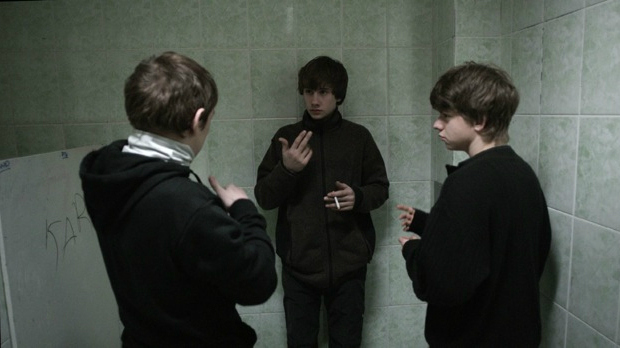 In the brutal closing sequence of Miroslav Slaboshpitsky’s The Tribe, I stirred so uncomfortably that I shut and covered my eyes. The fact that the sounds of this truly stunning finale proved more traumatizing and lasting than anything I could have seen with my eyes is a bold testament to the powerful work Slaboshpitsky’s done with his film. He has made you ingrain yourself so completely with the restrictions he’s put on you as a viewer that your involvement is total and devastating.

Loosely following the drug-dealing and prostituting tentants of a Ukranian boarding school for the deaf, The Tribe unfolds with absolutely no spoken dialogue. The students converse purely in sign language and subtitles are withheld, forcing the viewer to vitally engage in the body language and intangible communication of the characters. Slaboshpitsky also chooses to use absolutely no film score or music. Each scene is an unbroken Steadicam track, flowing through and eventually sitting stoically for the entirety of the shot. The construct is strict and succeeds on a multitude of levels. It creates an amazingly dense patchwork of subtextual forces that, when combined, take the film from Gaspar Noé-esque provocation to a stunning tour de force.

Force 1: the power of sight among the deaf. What is an argument if simply looking away ends it altogether? Watching these tortured teenagers paw, slap and grab one another out of desperation to communicate sets a critical and primal tone. Even more compelling is the experience of hearing those things. These people are literally yanking and fighting with each other just to reach one another or get an important point across. As Slaboshpitsky shows us, with the inability to hear, sight is existence, and in many ways can literally mean life or death.

Force 2: the power of ignorance for a viewer. With no subtitles, you spend large parts of these long single-camera setups simply trying to understand the essential circumstances of what is happening. There is no film score to set a tone for what often seems a pedestrian scene: two friends catching up after a trip can actually prove more sinister than a discussion about the sex trafficking of young deaf teenagers). Through an unflinching repetition of this setup (where are we? what’s happening? what are the stakes?), Slaboshpitsky lures us irrevocably into his world.

Force 3 is a more regularly explored and obvious tactic: the long take. Through detailed staging and militant adherence to making us wait, The Tribe harnesses one of the true beauties of cinema: the construct of time. Again and again Slaboshpitsky forces us to wait and endure lengthily procedural scenes, and by doing so deepening and heightening our senses. In the case of two teenagers applying for a passport, the scene is boring; in the case of the film’s much-discussed abortion sequence, the scene is brutally detailed in a way that is almost “un-cinematic” in the traditional sense of the term. With no score, no screaming dialogue, scenes instead collectively achieve something truly miraculous: the ugly and unflinching beauty of truth.

In many ways, just as how Antonioni turned how many of us thought of traditional narrative on its head with L’avventura, Slaboshpitsky aims for the tectonic. The brutality and beauty of nature is in its consistency; its methodical insistence and its lack of consideration for the uniqueness of humanity. In many startling ways, The Tribe accomplishes just the same.

Finally, the power of sound; a topic of particular interest to me as a film composer. Strangely enough, I’ve always felt like truly perfect films didn’t need scores. I felt like the power of cinema was in its obstinance, its power to insist that the lights weren’t turning back on until 90 minutes had ticked off the clock. I loved the power of that and early on, scores felt like a form of cheating. I realize that’s silly now and nothing could ever be that definitive, but it was truly my instinct. Now, when I first sit to watch a film that I’m being asked to write music for, my impulse is to pick up the phone and call the director and urge her/him not to put a score to it. If I really love a film, I fight for its silence internally before anything. The Tribe encapsulates the reasons why I feel that way perfectly.

The lack of score here is absolutely necessary and forces us to never detach from the often ugly humanity of these characters and their behaviors. It requires us to never judge the tone of any one scene and most importantly, to connect on such a level of realism that the fact you’re watching a film almost leaves your mind. It also gifts us with one of the more compelling sex scenes in recent memory, transforming a resistant business transaction into a true spark of connection amidst an unrelenting wave of brutality.  In the gaze of yet another long take, the characters’ breathing and the physicality of their bodies change. A list of intangible elements slowly shift and we somehow follow it intuitively, without knowing why exactly.

The combination of these elements works like an underwater current. Unknown to ourselves, we have been drawn in with the entirety of our senses and humanity into The Tribe.  We’re drawn forward, leaning in; listening, squinting and intuiting as to the nature of every moment unfolding in front of us. By the time The Tribe reaches its shocking conclusion, it has primed you into an entirely new type of viewer, allowing the closing moments to arrest you in a deeper and more vulnerable place than any other film.

In what could be a tedious technical exercise, Slaboshpitsky instead uses the perfect mix of approaches to involve the viewer in a totally unique fashion. By never flinching and forcing us to experience his story in all its abject realism, he forces us towards an empathy that left me feeling strangely moved. I couldn’t say just how; but irrevocably haunted and moved.

In many ways, it’s the only way to tell a story this sad, this hopeless and this brutal: while hinting towards beauty.