Finding Soul at U.S. in Progress at the Champs-Élysées Film Festival 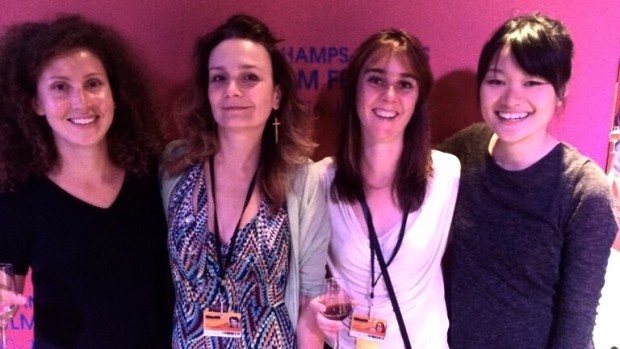 Bonjouring my way down the Champs-Élysées, I arrive at Ladurée, a Parisian bakery nearly as iconic as the Arc de Triomphe. I sit among film distributors and we are presented with food almost too pretty to eat. We are in Paris for U.S. in Progress, a joint program between Black Rabbit Film and the Champs-Élysées Film Festival. The purpose is to expose U.S. indie films in post-production to European buyers and distributors and introduce the American filmmakers to the European market. The three-day event is organized bi-annually, first during the Champs-Élysées Film Festival and again during the American Film Festival in Wroclaw, Poland.

The slate for this year’s Paris edition is an impressive array of seven films in various stages of post-production. After three days of screenings, meetings, and parties, a jury selects a winning project, announced by festival director Sophie Dulac at the final reception. This year’s prize is awarded to Diverge, a sci-fi thriller directed by James Morrison and produced by Noah Lang, David Mandel and Matthew Smaglik. The package includes subtitling and audio post-production services from Titra Tvs, registration to the 2016 Producers Network at Cannes, post-production support from Eaux Vives Productions, color grading by Firefly Cinema, promotional support from Europa Distribution, a dedicated screening organized by Phi Centre and promotional support from Kickstarter. When accepting the award, the winning team is given a supersized champagne bottle that they immediately pop open. As the bubbly makes the rounds in cheers and toastings, it becomes clear that, as another producer later says, “We are all the champs of the [insert French accent] Champs.”

The complete list of U.S. in Progress projects at the 2015 Champs-Élysées Film Festival:

When I left the macaroon sanctuary after that first lunch at Ladureé, a distributor said to me, “Paris has no soul.” We were walking back down the crowded Champs Élysées. Flashes of red and purple festival banners accented the colorless buildings lining the street. In the days that followed, I found myself studying these beige façades, thinking about my glimpse into the potentially soulless city — the one female waitress, the incidental Michael Jordan sighting, the jungle-themed smoking room in David Lynch’s nightclub Silencio, the cab driver who ripped off Josh Safdie (according to Josh Safdie), and the chance encounter with Vilmos Zsigmond the morning after watching Bette Midler’s staggering performance in The Rose.

Ultimately, I’m unsure whether I can comment on the state of Paris’s soul, but what’s undeniable about the Champs Élysées, or any other film festival, is how an energy that starts in the work of the programmers can spread outwards, affecting the spirit in a city. When I first met the U.S. in Progress programming team — four women, spread across three cities and two continents, designing and running a bi-annual program for the past five years, I encountered not only their intense dedication for building a niche program that brings together U.S. indie filmmakers and the European market but also a pocket of, yes, soul amidst the urban melee of Paris.

Adeline Monzier of Black Rabbit Film is based in New York with Marie Zeniter while Chantal Lian is based in Paris. Ula Śniegowska of the American Film Festival Wroclaw is based in Poland. In Paris, the five of us discuss the history of U.S. in Progress, the current structure of the program, and their future plans.

Filmmaker: The inaugural U.S. in Progress was five years ago at the American Film Festival in Wroclaw, Poland. How did you get the idea for the program?

Monzier: I was in New York and found that many independent filmmakers had no idea how to reach the European market or how European distribution and sales works. In the U.S. you usually wait for a festival premiere to get a sales agent and distribution. But in Europe, if you go to a festival without a sales agent, it’s useless. You are too late.

Filmmaker: So you’ve designed a bi-annual program — Paris in the summer and Wroclaw in the fall — to immerse American filmmakers in the European market?

Monzier: Yes, there is a work-in-progress program for Latin American films jointly organized by the Toulouse and San Sebastian Film Festivals called Cine en Construcción. I had been to the program and thought it worked well, so the idea was to do something similar with American films. When I heard about the launch of the American Film Festival in Poland, where the focus would be American indies, I felt it was a perfect festival to house our program, so I connected with Ula here. Sophie Dulac was also building a Paris festival around American indies and looking for a complementary industry event, so it was another complementary festival.

Filmmaker: What do you look for when selecting projects?

Monzier: Content and genre are most important. We always make sure we have an eclectic lineup with different genres, and it just so happens that when we put the slate together, we’ll have a diverse variety of filmmakers — diversity is not taken into account, but it always happens naturally that we’ll have female filmmakers or minority filmmakers.

Śniegowska: We don’t just look at the film itself, but into the past careers of the filmmakers, and their future potential.

Filmmaker: Do you have many disagreements over which submissions have most potential?

Monzier: We have different tastes and sensibilities, but we always agree in the end, and reach a balance.

Śniegowska: We look at the artistic qualities and potential for the market. The goal of the program is finding filmmakers with their own personal or signature styles, so it’s not just about our preferences or tastes.

Filmmaker: Do you consider the different tastes between American and European audiences?

Monzier: People laugh like crazy or scream during films in New York, and this wouldn’t happen anywhere in France. The audiences are much more reactive in New York. But, the biggest difference is probably that Americans don’t like subtitles.

Filmmaker: How is the European market different than the U.S. market?

Śniegowska: American filmmakers should also remember that the European market is not just Cannes or Locarno or Berlin. There are hundreds of important European festivals. It’s a huge market, not always with a monetary reward, but with attention and with audiences.

Monzier: And attention and audiences can add up.

Monzier: Yes. Sometimes young American filmmakers are too impatient. They compare their films to bigger ones but they have to be realistic, and sometimes they need to make compromises. You can’t always get the money you want, but if you get a release, you can maybe get money for the next film.

Lian: No matter what the minimum guarantee is, the most important thing for a film, especially a first feature, is to be released. When you are released in one European country, you get attention and the potential to get released in another European country. It’s about the long-term plan.

Filmmaker: What’s the ideal trajectory for a project out of U.S. in Progress?

Śniegowska: I think my favorite success story is Hide Your Smiling Faces. It was picked up by a French sales agent, which helped to get the film to different European festivals. It was post-produced in Warsaw and it got an American premiere at Tribeca.

Lian: Even if a project isn’t the winning film, our program is a great way for filmmakers to meet and connect with the right people.

Monzier: We have different expectations for different projects. The markets are hard, and not every film, especially if it’s a first-time feature film, will get distribution. So it’s definitely about meeting people and building relationships, not just with sales agents and distributors, but with other producers as well. Several filmmakers who have met during our program are collaborating now. I think it’s because our format is very small and intimate and a lot of our lunches and dinners are a great way for people to meet, so what can happen is not always what you’d expect. The connections are as important as getting a sale.

Filmmaker: Do you plan to expand the program or keep it intimate?

Śniegowska: We like that it’s a small program for five-to-seven films. It’s a perfect format and what we can handle as such a small team ourselves. It’s good for the sales agents and distributors because they aren’t overburdened with having to watch too many projects. They wouldn’t be able to give their attention to more films during the three-day program.

Zeniter: Where we’d like to expand is with the prizes we give.

Śniegowska: Right now the prize is made up of various services — about 40,000 euros of post-production services in European facilities, a free pass for the producers network at Cannes, and we haven’t yet come up for a way to get cash for the filmmakers, but that’s a goal.

Filmmaker: Any advice to American filmmakers interested in European distribution?

Monzier: Well…I must say that many American filmmakers describe their films as having a “European sensibility,” which is funny because it really doesn’t mean anything, especially when they all say it.

The next edition of US in Progress is 21 October 2015 – 24 October 2015 in Wrocław, Poland. The deadline for submitting projects is 31 August 31st. For more information and submission instructions, visit usinprogress.com or americanfilmfestival.pl.