by Sarah Salovaara
in Filmmaker Videos, Filmmaking
on Jun 24, 2015

Chicago filmmakers Jerzy Rose and Halle Butler are currently fundraising for their feature length satire Neighborhood Food Drive, about two egomaniacal restauranteurs and their unpaid intern as they throw a series of lavish and disastrous fundraisers. Below, Rose interviews his casting director Samy Burch about the process of pulling together both professional actors and otherwise for a cast headed up by Bruce Bundy and Lyra Hill.–SS

Jerzy Rose: I have a vague memory of you telling me, after you’d seen Crimes Against Humanity, that you’d love to help me cast my next movie. I followed up one year later. I think I simply asked “How does casting work?” Crimes was written almost entirely for friends and non-actors—Chicago-based visual artists and experimental filmmakers—there was no casting/audition process.

What were your thoughts on the Crimes ensemble and, after reading Neighborhood Food Drive, what was your initial approach to building the cast? What were you immediately looking for? 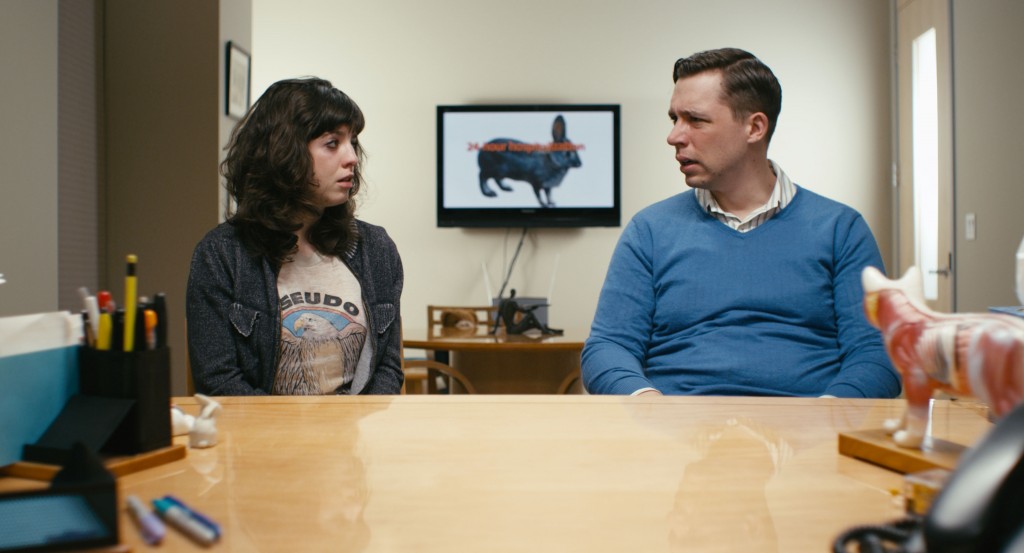 Samy Burch: Yes I loved the question, “How does casting work?” because I think a lot of directors honestly never think to ask that.

When Alex Mechanik (The Greggs) came home from Slamdance still smelling of mountain dust, he IMMEDIATELY put in the screener of Crimes Against Humanity to show me and it was the kind of experience where I was genuinely laughing really deeply and shocked at how unfamiliar the feeling felt.

I think it’s hard enough, when casting “non-actors” (this term is not really right, they’re more like actors that haven’t realized they’re actors? Unless they’re actually “non-actors” and then they shouldn’t be in a movie), to gather a handful and have them effectively play themselves: young people talking in a room holding beers—but to so beautifully pull it off in something that has such a complex tone, set in a strange world of academia, with the patience to meander off the main path—it’s RARE. That was the first thing that really struck me, how every single person existed in the same world. That’s rare even for huge blockbuster comedies with unlimited resources.

So definitely when we started working on Neighborhood Food Drive tone was key. Basically everyone that auditioned was sent a screener. Has anything surprised you about this process?

Rose: I was surprised by how compartmentalized the casting process felt, or more specifically, how similar it felt to the writing process. There’s this screenwriting idea that each smaller section of the script is a model of the entire story—as is each scene, each interaction—so that every exchange, every reversal, exemplifies the overall game that the movie is playing. And breaking it into pieces like that keeps everything “important” moment to moment, so you don’t end up with A to B filler.

Casting is the same—one of the first things you told me was that every part (there are like 10-15) has some specific, idiosyncratic game that they play or arc they go through, even if it’s just a one-scene character. I think you said something like “everyone gets something interesting to do.” There’s no filler and everything deserves equal attention.

To your other point: I believe asking young, talkative beer drinkers to convincingly hold beers and talk in a room is waay more difficult that getting them to do something bigger and weirder. I’m amazed by people that can play anything close to themselves.

Is it unusual to ask everyone that auditions to watch a director’s previous film in its entirety before taping? How important is “getting it”? And, when you’re the one making the tape, how much directing do you do?

Burch: Yeah I think it’s pretty unusual. A sense of humor is hard to describe. Some actors are so talented they can just sniff at it and not even think it’s funny and still do a great job. But for something like this, I think everyone that’s been cast so far is INTO it, which I love.

A huge part of casting is directing. And a really pure form, because it’s just you and the actor, in a room. It’s very intimate, really. Usually I’m the reader so I’m making direct eye contact while keeping a mental list of notes. Some actors can come in, nail it, and leave. And some need a lot of direction and we can do it twenty times– which I’ll only do of course if I can see that they’ll get there. But I can really appreciate what an UNNATURAL situation an audition is and I try not to forget that.

Ideally, I act as an extension of the writer/director, while at the same time try to capture what’s really special about the person that’s standing in front of me. Sometimes someone comes in that’s so different from how the character was written or envisioned but they show you a new way, which is fun and exciting. Has hearing your dialogue read aloud by a lot of different people been a strange experience and have you learned anything from it?

Rose: Definitely. That might be the biggest difference between working with a casting director and shooting from the hip. There are types and characterizations that I simply wouldn’t have thought of. Even gender! I didn’t always specify in the script. It really opens things up.

Knowing you’ll be working with a good casting director could make you a more fearless writer. Like, “I can write anything and we’ll find someone who will pull it off.” That’s how I’ve always felt with someone like Ted Tremper (Crimes Against Humanity), like he can sort of make anything I write sound perfect. Oddly enough, I hadn’t even thought of Ted for any of the parts in Neighborhood Food Drive—it was your suggestion. So having that added perspective made a huge difference even when casting people I would consider part of my regular troupe. What’s that like on your end? Assembling a ensemble partly from performers you know exclusively from my last movie?

CRIMES AGAINST HUMANITY Excerpt from Jerzy Rose on Vimeo.

Burch: It was great to start off the process already trusting you and your taste and the fact that you have this fun base of Chicago talent that I’m a big fan of to pull from was wonderful. I’ve loved this, it’s been great to find that perfect mixture. Bringing in New York actors and comedians, searching in Chicago, which is a new city for me. It’s very delicate business. Because, obviously, the whole thing is about CHEMISTRY. Although…. what isn’t? But especially assembling the cast of a movie. HIGH STAKES CHEMISTRY.

Rose: What’s drawn you to working in casting? What is satisfying and what is exciting?

Burch: I was born into casting. My mom is an amazing casting director (Jackie Burch) and I grew up in her office. I would sit under her desk during sessions, and later worked as her assistant. So I’ve always known the value of it and I’ve been trained as fuck. And she’s really a bulldog, she FIGHTS for who she wants and doesn’t mince words. I probably mince some words. I work in other realms in film, as a writer and director of my own projects (with Alex Mechanik) but I deeply love and respect casting. I love finding and supporting talent, there is nothing more fun than that. When someone new comes into the room and makes you forget that you’ve just seen fifty people before them and none of them were good. And every project you do, you meet more great people, and they go in the basket. My basket is bursting right now.

I’m thrilled that some of my favorite people have ended up in Neighborhood Food Drive (obviously Bruce Bundy, a long-time friend and inspiration, but also little Ruby McCollister, who I have known since she was 12-years-old) as well as actors I had never seen before their audition for this. When you’re lucky enough to work on a project and for a director that you believe in, it’s all exciting and it’s all satisfying. And when you’re not, it’s still pretty fun because you’re fighting against the tide. And anyone interested in casting should watch Casting By (2012) about the incredible Marion Dougherty. I think it’s still up on HBO.