To Not Be Crippled by Storytelling: Les Blank’s A Poem is a Naked Person 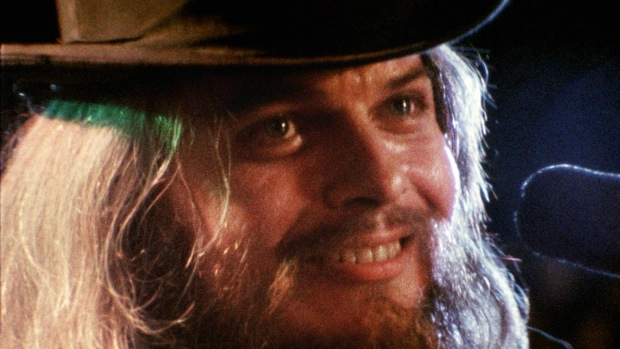 Leon Russell in A Poem is a Naked Person

A Poem is a Naked Person, Leon Russell, Les Blank

Early in Les Blank’s A Poem is a Naked Person, we see a shirtless, bearded man in cutoffs standing in an empty white pool nonchalantly scooping tiny scorpions into a mason jar with a piece of paper. At first, this action is underscored with “Take Me” by George Jones, carried over from the prior scene, which featured Jones playing in musician Leon Russell’s riverside Oklahoma recording studio. As the Jones song winds down we’re treated to the scorpion catcher’s musings on creativity, on how letting children draw on blank walls is sensible parenting, on how he’s made uncomfortable by prefabricated housing where everything is already finished. Once he’s cleared the scorpions, he begins to paint on the pool floor. We can begin to discern the shape of an octopus. Bubbly, colorful text fades in (Blank’s take on “lower thirds”), introducing this man as Jim Franklin; the film doesn’t share with us that he was a Texas-based artist recruited by Russell to paint the walls of his new studio northeast of Tulsa, but facts and figures aren’t really much on its mind. Then, there’s a sharp cut to some time later. Much later. We know this because the entire pool is now covered with a psychedelic seascape.

What does any of this have to do with Leon Russell, the purported subject of A Poem is a Naked Person? A little bit of everything, and a little bit of nothing as well. One of the most idiosyncratic works that could be broadly categorized as a “music documentary,” Blank’s film, shot from 1972-74, is about country rocker Leon Russell but Leon disappears regularly, and at length, to the point where sometimes it barely seems a film about Russell at all. Yet, by the time it’s finished, Poem feels an essential act of portraiture. It’s a film where beautifully intimate concert footage is placed on equal footing with an odd aside where an Oklahoma parachutist (rumored to be D. B. Cooper) drinks a toast, breaks the glass with his teeth, and chews the pieces into bits. It’s a film where the catching and display of a large catfish represents high drama. A film where the longest sustained interview is given by the elderly couple who maintain Russell’s studio. It’s doubtful that this willful strangeness didn’t play some role in Russell, who hired Blank and Maureen Gosling to make it, keeping the film out of the public eye for decades.

There’s plenty of music in A Poem is a Naked Person, most of it performed live. Many of these performances take place on stage, but more happen within the walls of Russell’s studio as he records his own songs, renditions of standards, or adds flourishes to tunes by other musicians passing through. (Though Russell has twenty albums as a songwriter to his name, he’s as well known for session work on records by the Beach Boys, Elton John, Gram Parsons, and more.) There’s a sense throughout of musicians gathered together in the name of making a joyful racket, of the pleasure in interpreting the work of others (traditionals given a Russell spin include “Amazing Grace,” “Rollin’ in My Sweet Baby’s Arms,” and, most amusingly, Mendelssohn’s “Wedding March,” which he punches up with a bluesy piano riff), and of generations colliding. Check out Russell’s two female vocalists, the younger sports long middle-parted hair suggesting a flower-child leftover, the older’s more gamine cut and classic look suggests a lost member of Bob Wills’ Playboys.

Blank’s handling of music throughout A Poem is a Naked Person tells us all we need to know about the roots of Russell’s art. Instead of presenting a rock critic to blandly tell us about Russell’s American music influences, Blank shows us, cutting from Russell performing “Amazing Grace” to a raucous gospel number in an African-American church. We leave another performance to spend time with a few gentlemen playing bluegrass in the back room of the local “Pickin’ Parlor.” A quick sequence of a Native American ceremony reminds us that Russell’s home and workspace exist not too far from Tahlequah, capital of the Cherokee nation. The variety in Russell’s own music choices featured — from the more straight-laced country to wilder ’70s boogie — also further suggests this breadth of influence and interest. Russell, then, with his scratchy voice and propensity for barroom piano rolls is placed firmly at the nexus of many strands of American music and culture. Blank’s done this simply, with editing.

Given that he’d been steadily churning out homespun, oddball portraitures since the 1960s, Les Blank was never really gone, but of late he certainly feels back. Most know Blank via his Werner Herzog diptych, the feature Burden of Dreams (which documents with agonizing hilarity the troubled production of Fitzcarraldo), and short Werner Herzog Eats His Shoe (which documents exactly what its title suggests). A 2011 Museum of Modern Art retro and a smaller package of films that toured a bit last summer helped remind audiences of his rich history documenting the cuisines and music of regional America. Following the Criterion Collection’s release of a set of his films on disc and the 2014 NYFF premiere of his posthumous last, How to Smell a Rose: A Visit with Ricky Leacock, he’s probably as prominent now as he’s ever been. This is a good thing. Documentary film needs to remember him better.

Watching a Les Blank movie, you get the sense of a filmmaker who could walk up to just about anyone, anywhere, and establish a familiarity within seconds and start filming as if he’d been in that spot with them forever. There are rarely overarching stories (though people tell plenty of them), but you rarely feel when his films are over that you haven’t seen something substantial and rounded and bursting with ideas, and, perhaps most importantly, joyous. Few filmmakers could get away with a movie like Yum Yum Yum! A Taste of Cajun and Creole Cooking which consists almost solely of watching food cooked in big pots, or Garlic Is as Good as Ten Mothers, a completely non-scientific anecdotal paean to the healing properties of the stinking rose. There’s love in these films, a fascination with the richness of life, and a complete lack of self-consciousness — witness a glimpse of Blank’s bare gut during one of A Poem is a Naked Person’s concert sequences. He’s not above a cheap but deserved laugh, either: in Poem, after members of the visiting band She argue to Franklin that they’re on their “way up” and note all the “shit they’ve eaten” to get to their position, Blank cuts to a gentleman at the tail end of a pie eating contest, his face caked in chocolate icing. I can’t locate any record of the fame of She; Blank’s edit suggests more than a little foresight.

So it goes in a Les Blank film. The silly rubs elbows with the soulful and the serious, and discursiveness always wins the day. Why don’t we have more music documentaries like this? Perhaps it’s the current obsession with “storytelling” that has proven crippling to so many documentaries. In A Poem is a Naked Person, Russell isn’t seen building up to one big show, the release of his landmark album, or navigating some personal crisis. We just see him (and though Blank’s not a filmmaker to make a point of this, we’re given all sides of the man — his ego, his perfectionism, his humor, his silliness, his respect for other musicians), albeit occasionally, and are more often immersed in the milieu in which he lives and works. Sometimes this means spending time with a character like Franklin, who was part of Russell’s circle; sometimes it means hanging out with a handful of residents of Tulsa as they watch the demolition of the Bliss Hotel, observing their dress, hearing their accents. The urge towards storytelling, when left to run amok, can snuff out space for the quickly glimpsed, for sensation building, space creating. Blank’s always interested in the latter — his films are tactile, of-the-moment, grounded. When someone cooks in a Les Blank movie, you can just about smell it.

A Poem is a Naked Person’s value lies in its accumulative quality — each element tells us something about Russell, but Blank leaves it to us to puzzle through those connections. The sensorial, mercurial Poem has more in common with the work of Stan Brakhage than D. A. Pennebaker, and its long-delayed emergence into the world opens up a host of possibilities for documentary filmmakers (imagine if the canonical rock movies were Gimme Shelter, The Last Waltz, Dont Look Back, and A Poem is a Naked Person, instead of just the first three). Every film is a system that arranges elements to create meaning, and Blank’s tactics evince a kind of sophisticated, intuitive understanding of cinema that vaults it past most of the contemporary conversations in documentary around hybridity, ethics, and, most boringly, manipulation. It’s an expressionist work, a portrait of an artist through a prismatic lens that might not make sense to every viewer in the same way, but that’s cause for excitement rather than trepidation. Every person’s experience of A Poem is a Naked Person will be his or her own, and so long as viewers keep in mind that all the tangential roads Blank takes them down refer, for him, back to Leon should be all the roadmap anyone needs. Greetings to you, A Poem is a Naked Person. Glad you finally made it.