“We Didn’t Fictionalize Much”: Sean Baker on Tangerine 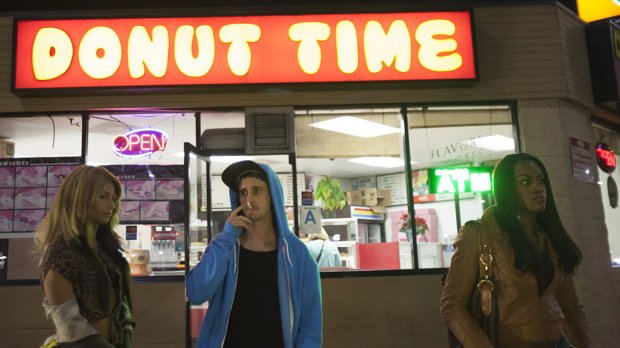 by Andreas Stoehr
in Directors, Interviews
on Jul 8, 2015

Shot on three iPhones 5s’s with a pair of unknown actresses as leads, Sean Baker’s Tangerine was a hazardous proposition, but the finished product justifies every ounce of risk involved in the production, showing just how far the crew could stretch a minuscule budget. Shot on and around real Los Angeles streets and shops, the film keeps pace with transgender sex workers Sin-Dee (Kitana Kiki Rodriguez) and Alexandra (Mya Taylor) as they zigzag around the city on Christmas Eve on dual missions. Sin-Dee’s embarking on a “hell hath no fury like a woman scorned” revenge mission against her two-timing boyfriend and pimp Chester (James Ransone); Alexandra’s friends to come hear her sing (at a club date she has to pay for herself) and trying to earn a little cash. Their paths intersect with that of Razmik (Baker regular Karren Karagulian), an Armenian cab driver who has his own problems at home, and soon everyone collides in a local donut shop for a multilingual face-off.

Although Tangerine is a rowdy, raunchy comedy, its storytelling is unexpectedly generous and humane, allowing each character their own punchlines and point of view. This speaks to the spirit of collaboration undergirding the whole production process. Baker depended heavily on his stars, their rapport with one another, and their knowledge of Tangerine’s milieu, and the end result of this democratized filmmaking is a funny and heartwarming yuletide tale. Baker was kind enough to talk with me about this process, his influences, and his favorite scene in the movie.

Filmmaker: Tangerine is such a new and different movie in the way it was made, starring totally new actresses. What movies or filmmakers did you have in mind when you were making it, as either inspirations or as examples?

Baker: Yes, well, it’s pretty obvious. I wear my influences on my sleeve. I don’t know how apparent it is, but Mike Leigh has always been a tremendous influence. In this case, it was all about that scene at the end at Donut Time. One of the few ideas I had going into this was that all of our characters had to converge in a climactic confrontation at Donut Time, which is a landmark in that area. So Mike Leigh’s mid-[period]-films, like Secrets & Lies and High Hopes especially. Technically, I would say I turn to Altman a lot with sound, especially with the Donut Time scene. I pulled aside Irin Strauss, our sound recordist, and said, “Look, I know we have a limited budget here, but just rent more lavs for these days, because I want every single person in this shot miked, so that in post-production I can play with which lines are in the forefront and which ones are in the background.” Besides that, it was just about my influences across the board, from von Trier to Ulrich Seidl to Ken Loach, etc. That wheelhouse.

Filmmaker: I was wondering about the scene early on when the actor Clu Gulager gets in the taxi. I’d seen him in The Killers and some other movies, but I didn’t know about his background, that he’s from Oklahoma just like his character in the movie.

Baker: It’s funny: he was a fan of Starlet, my previous film. I remember meeting him at the TCL Chinese Theatre in Hollywood at one point, and he’d seen it twice. And I was like, “Oh my god, really? Why?” “I really loved it, and if you make your next film, I want to be a part of it.” My co-screenwriter Chris Bergoch was there, and when we were going into production on Tangerine, he’s like, “Remember, Clu said he would be in a film if you’re making a new film, and you’d better reach out to him!”

We started talking about what his scene would be, and [Clu] said he loved to improvise. And I said, “OK, great, you would be the only person I can see out of everybody I’ve cast for the cab passengers that would actually converse with Razmik about his background, and that might lead to your background.” So then he sat there on the couch as we were brainstorming, and told me this monologue that he had created and always wanted to deliver about being named — being a Cherokee, how the mothers named their children, and it might sound like a girl’s name, but it’s not. I said, “Whoa, you know what this movie’s about, right? It’s about identity, we’re working with transgender sex workers, so you just gave me a monologue that subtextually fits into the film. I wanna tweak it a little bit and give you a few lines that’ll really drive it home.”

We did a few tweaks until we got to the point that this story is actually very relevant subtextually to the film. He did it for me maybe five times in the cab, and each take was just as good. I could have put all five takes into the movie. At the end of that monologue, where he’s just sort of collapsing into the back seat, there was something that’s so sad about it, so much you can look into with that character and wonder about his background, what he’s gone through in his life that he’s just now slumped over with the weight of life. So yeah, working with him was absolutely wonderful. His son, John Gulager, is the one who’s actually in the shower, being quote-unquote “serviced,” while Sin-Dee breaks into the brothel. He’s the one who has the comedic “Should I call the cops?”

Filmmaker: I really love that moment, where the motel room becomes almost like a clown car.

Baker: I have to really give that to my co-screenwriter Chris Bergoch. He did his research on that part and found a few of these makeshift brothels that were working out of motels and hotels. He went into one of these places and said it was insane. There were two people on the bed, there was one person on the toilet, there was another guy in the shower, and I said, “Are you kidding? That’s amazing! We can slowly peel back the layers of a brothel and show that there’s more and more people.” I never saw what the actual thing was, but he described it to me so visually that we worked it into the film.

Filmmaker: There’s so many little details in Tangerine just like that, that manage to work as jokes in a movie but also as something that feels like it has to be from real life.

Baker: We didn’t fictionalize much, let’s just say that. All the stories and the anecdotes that we heard, we pretty much just reenacted them for the film. There was stuff that was completely fictionalized, such as Alexandra having to pay to play — that’s what I call it — to pay to perform. That came more from just the artist’s perspective, what you have to do to get your art out there, but it also played into what these women have to do to express themselves. All Alexandra wants to do, her dreams, her aspirations, are just to get out there and be seen and heard. She’s an artist at heart. She’s an entertainer at heart. She is a transgender woman of color sex worker with so little opportunity due to discrimination and oppression, but she’s still working her hardest just to get her art out there. That was something that was more just a narrative device that I thought really encapsulated her struggle. So that was basically fictionalized, but everything else comes from the research time that we spent not only with Mya and Kiki, but with a lot of other people from that neighborhood, some of them women who actually worked the corner.

Filmmaker: I was really curious to know whether one scene — honestly, my favorite part of the movie — was taken from real life: the car wash sex scene with Razmik and Alexandra.

Baker: I’ve always wanted to do a one-take in a car wash. I don’t know why that hasn’t been done yet. I didn’t know what genre it would eventually fall under. I thought it might be, like, a gangster film in which somebody gets murdered in a car wash. I was always trying to figure that out in all of my films. And then, I think it was actually Mya who told me that some of her friends had taken johns to the car wash, because it gives you five minutes of complete privacy without having to pay for a motel room. I thought, “Mya, that’s great! I’ve always been looking for a car wash scene! That’s perfect! Thank you, thank you, thank you!”

Filmmaker: Having the camera sitting there in the back just watching them, with no music, and you can faintly see the motions, and it’s just the car wash doing all the talking. I love that.

Baker: I worked very closely with my great sound mixer, Jeremy Grody. I said, “Look, I wanna be in that car with them. I wanna be almost participating in this with them. I wanna hear the car wash in surround sound. I want you to be filling all the channels. I wanna hear suds on the right, I wanna hear a dryer on the left.” It was a fun sound design, because we really layered it. And of course, it was very much our intention for some of it to be related to the actual sex act that’s going on in there, everything from the suds to the blow drying, et cetera.

I’m glad that people have connected with that scene. A lot of people call it “surprisingly intimate,” and I’m so happy that people got that from it. I think it might be my favorite scene as well. No, I think my favorite scene is the last scene [SPOILERS FOLLOW], simply because for a filmmaker, your favorite scenes are always the scenes that are exactly how you envisioned them. We only did one take of that, because it was actually really brave for those two to do that. It was very uncomfortable for them. It was about as close to, like, when we think of a sex scene, because… they’re naked. When the wigs come off, for them, it was really stripping away any privacy whatsoever.

We actually approached it with a closed set. We allowed very few people in that laundromat. We had PAs out in the parking lot making sure that none of their acquaintances or friends could actually see into the laundromat. I didn’t want to make eye contact with them. Usually I do: when I’m directing, I make eye contact. But I didn’t want to make eye contact because I didn’t want them to feel as if I was invading their privacy any more. And they sat down, and they did that scene in one take, and they were just so incredibly wonderful. I never get emotional on my own film sets, because I know what I’ve written. I might be impressed with performances, but I’m never driven to the point where I’m actually getting emotional. But I sat behind the monitor, the little iPhone, watching it, and I actually started to get teary-eyed. I think that Mya and Kiki gave two amazing performances through this film, but they outdid themselves in that last scene. I can’t say enough. And I can’t thank them enough for putting their trust in me and doing something that is incredibly brave and incredibly hard for them to do. So that’s my favorite scene.