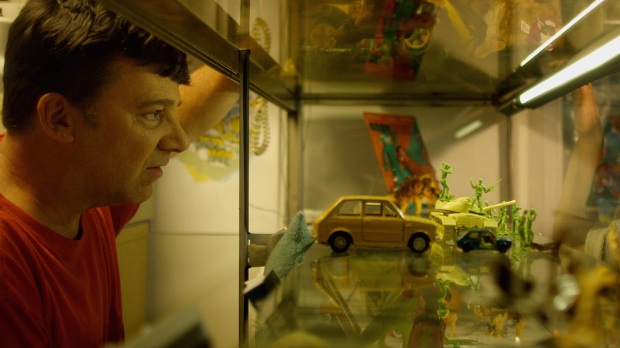 by Scott Macaulay
in Directors, Interviews
on Sep 13, 2015

A.D. Calvo is known in the independent horror community for frightening features like The Midnight Game and House of Dust, but with The Missing Girl, premiering in Toronto’s Vanguard section, he dials down the jump scares in favor of a bittersweet character study that’s still not without a sense of mystery. Robert Longstreet, who has given indelible performances in films like This is Martin Bonner and Septien, plays a sad sack owner of a comic book store who becomes unhinged when his pretty young employee, played by Alexia Rasmussen, disappears. Below, Calvo discusses his change of direction, his interest in comics, and his thoughts on the business of independent film.

Filmmaker:The Missing Girl is a significant departure from your previous, more horror-related films. What prompted the idea of doing more of a drama, and where did the story come from?

Calvo: I’ve always enjoyed moody, atmospheric films, not just straight-out horror. In my earlier films, I was exploring how to create atmosphere, build suspense, make people feel dread with an occasional jump scare sprinkled in. But those films were mainly about plot and not so much about character.

With The Missing Girl, I wanted to develop characters first and let the story unfold from that — something that was character-driven, not plot driven. I never intended this film to be a genre film, but I admit, my original version of the script was pretty dark. As the script developed, and I got to know the characters more, I realized it was a more hopeful story than that.

Maybe Mort has a little of me in him; with dreams of telling his own story, he thinks there’s something dark and sinister behind every curtain, when there really isn’t. Working with [producer] Mike Ryan helped me focus on character over plot and helped me unearth the story that was beneath the original concept.

Filmmaker: In terms of the film’s production, what was the biggest difference you felt on The Missing Girl without having to think of things like “jump scares” and SFX, both of which you’ve written about for Filmmaker?

Calvo: It allowed me to focus more on the acting instead of the technicalities of making a genre film. The backbone is in the characters, not fancy special effects. I needed to experience that firsthand. In terms of production, it allowed me to stop worrying about the tricks and focus more attention on the actors — what they were saying, what they were doing, and why — the emotional spine of each scene. And, with the help of a wonderful collaborative cast, I was able to make myself more present to that.

Filmmaker: Mort, your lead character, played by Robert Longstreet, works in a comic book store. What’s the significance of that, and what is your own relationship to comics and graphic novels? Do any creative inspirations come from them?

Calvo: Like many, I grew up a superhero fan — the usual comic fare, e.g., Hulk, Spiderman, Superman. Naturally, I was a horror fan as a kid, too, so I would also pick up issues of Famous Monsters and Fangoria. What brought me back to comics, as an adult, was Aimee Mann. I’ve always been a fan of her music, and several of her CD cases feature artwork inspired by comics and graphic novels. Her Lost in Space album was illustrated by a Canadian graphic novelist named Seth, and I fell in love with his work. I found the world of mature, indie comics visually stimulating and Seth’s work, among others, appealed to my aesthetics. These comics are more about real life, the little things, not the escapism of adolescence and superheroes. In The Missing Girl, the Ellen character represents a more mature view of the world, one that embraces pain and loneliness rather than tries to hide from it.

Not far from where I live, there’s a memorabilia and collectibles museum called the Barker Animation Museum. They sell animation cells there. It’s always been in the back of my mind as being a fantastic setting for a story. So the opening scene, with Mort sitting in his comic shop drawing, was situated in that world.

Lastly, I’ve always loved American Splendor and Ghost World, two films that are also based in that world, so those films influenced me as well.

Filmmaker: Your film gives interior moments to both Mort and the character of Ellen, played by Alexia Rasmussen. What were the challenges in scripting and editing with regards to point of view?

Calvo: The film features illustrated chapter breaks indicative of Ellen’s own comic style, she’s an aspiring graphic novelist and we see her drawings throughout the film. So, for me, the story is told mainly from her point of view. Perhaps a future comic book of hers, written in Brooklyn, looking back on her days working at Mort’s Comics & More. I enjoyed playing with the idea of that — although we see these interior moments of Mort’s, there’s a fuzzy line between what is really Mort’s world and what is Ellen’s imagining of it, at least in my mind.

Filmmaker: This is your fifth feature, all of which have been pure independent productions. What, on the business side, have you learned about distributing independent film during these years, and how are you adapting your process going forward to the new realities out there?

Calvo: I’ve learned there are ups and downs, and new realities quickly become old realities. I believe in the power of perseverance and self-improvement and am ever hopeful that I’ll be able to make another film, a better film. I’d make one in my backyard with an iPhone, if it came down to that. I’d love to say the business side was egalitarian, but it’s not always like that. Sometimes the cream rises to the top and sometimes it doesn’t, or worse, sometimes we’re fooled into thinking it’s cream when it’s really just soymilk. Where a film ends up and who actually sees it, is up to forces somewhat beyond one’s control. You just have to believe in what you’re doing and persevere.