Everyday Is Like Sunday: Soon-Mi Yoo’s Songs From the North 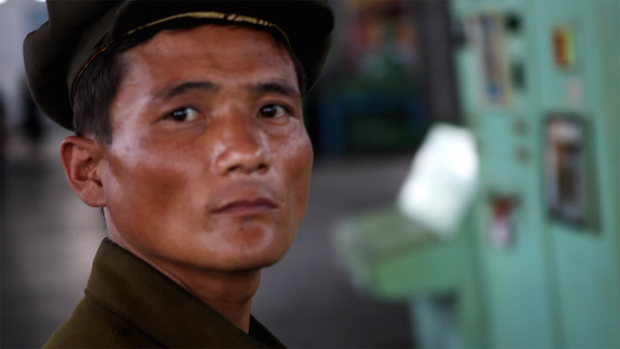 Songs From the North

Soon-Mi Yoo’s Songs From the North joins a small group of recent films that attempt to understand North Korea despite a lack of readily available resources. (The Interview will not be mentioned except just this once, because c’mon.) Jim Finn’s The Juche Idea combines real North Korean footage with CCTV-level, rigorously stilted fake propaganda and musical numbers of the director’s own puckish division, attempting to define something about the nation by producing materials ostensibly following the titular gibberish ideology; Mads Brügger’s annoying and unlightening The Red Chapel sends the Danish provocateur to the DPRK along with comedians to find out What’s Really Happening, mostly by messing with their handlers.

Songs From The North splits the difference; there’s plentiful propaganda excerpts and lots of singing in the original home movies shot by Yoo — often against the overheard pleas of her handlers — on her three trips to North Korea, but she’s barely heard on the soundtrack. Interjecting herself through on-screen text that sometimes suggest a transcribed, over-precious voiceover, Yoo’s mission is to try to see North Korea not as a walking nightmare dreamt into semi-plausible existence by a repressively omniscient regime, but as a country where glimpses of true daily life can be caught between state-chaperoned trips to circus performances and the self-explanatory Sinchon Museum of American War Atrocities. The opening shot of high-wire acrobatics at the circus summarizes the method when the performer abruptly plummets towards the safety net, destroying the illusion of a perfectly functioning display. Even in the most tightly-monitored despotic zones, there must be moments when the citizenry drop their official mask and all doesn’t go as planned, and Yoo repeatedly captures the moment when officialdom briefly ceases to function.

The most memorable flashes in Yoo’s films capture citizens minus ideological game face: a group of barely heard men in a billiards parlor, viewed through hanging beads; a traffic cop on night duty, startlingly and briefly seen in the night through a bus window; restaurant employees cleaning up the bar while asking why this is worth filming at all. The answer, of course, is that any moment not totally sculpted by the state is new ground when it comes to examining the North Korean state, requiring both the courage and adeptness to leave the camera on for a few precious seconds before inevitably being asked to turn it off.

Songs From the North bounces between these not-at-home movies and official state propaganda of all sorts, with pompous, histrionic populism as modeled for people balanced out by the decidedly more mundane reality. Pyongyang in winter is dreary in a familiar way, slushy, cold and populated by people trotting briskly from one uninspiring locale to another. It’s a far cry from the predictably bizarre propaganda Yoo generously samples: TV shows in which soldiers berate their wives for not being patriotic enough, state newsreels of weeping men and women unable to process the death of Kim Il-sung, a classroom lecture in which a professor explains to students the exact evils George W. Bush and the US pose to the country. Yoo’s most pointed thesis is that without mass US bombing during the Korean War, North Korea would never have come into existence; the rogue state is, from this view, justified in its isolationist paranoia. (For context, she turns to informed-but-not-state-sanctioned interviews with her father in South Korea, who remembers the days of division between North and South, but this is nothing like a thorough primer.)

Yoo’s candid camera glimpses really do amount to little more than watching the state mask drop for minuscule amounts of time. For ideological inquiry, I’d prefer Finn, but as someone fascinated by North Korea I found the film inevitably fascinating (which is not to say it hasn’t been assembled with essayistic elegance on its own terms). This is a different North Korea than the one we know, closer to the gloomy abandoned realm of Morrissey’s “Everyday Is Like Sunday” than the missile-touting scourge of the world. “Is North Korea the loneliest place on earth?” Yoo wonders in on-screen text. “A country without friends, without history, only myths, repeated endlessly from morning to night.” That’s the feeling the film conveys: solitude from the world felt on an individual, ambient level, a modest melancholy that provides a small but valuable corrective to what little first-hand, English-language materials we have on hand.