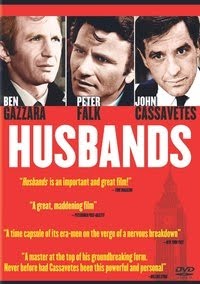 If you never saw Husbands during its brief release in 1970 through Columbia (mostly misunderstood by critics, audiences and even the studio that released it) or bought it on VHS, you’ve probably only heard of it through discussions people have of John Cassavetes’ work or books written on the actor/director.

If you’ve read about the film, like I have, you’re probably excited for this release, as for the first time, Husbands is being released close to how Cassavetes wanted it to be seen. It is one of my favorite chapters in Ray Carney’s seminal book on Cassavetes’ life and work, Cassavetes on Cassavetes (Faber and Faber). In the book Cassavetes describes Husbands as the “…craziest, most painful project that I’ve ever been involved in.”

At the time Cassavetes began thinking about making Husbands it sounds like it was motivated by money. He was still in post on Faces and had huge debts to pay off so he decided to make a film that would be extremely attractive to a studio. He asked his famous friends Lee Marvin and Anthony Quinn to play opposite him in a story about three guys who mourn the loss of their best friend by going on a alcohol fueled trip around the world. Unfortunately, when the three men met to work out the story and characters Marvin and Quinn did not get along, putting Cassavetes back to square one. Having always wanted to work with Peter Falk and Ben Gazzara, both highly touted at the time, he approached them for the roles and though he didn’t have money or a studio for the film yet, showing them Faces sold the actors that they wanted to make a film with Cassavetes. This would be the start of a long collaboration for the two actors in Cassavetes films as Falk would star later in A Woman Under The Influence and Big Trouble and Gazzara in The Killing of a Chinese Bookie and Opening Night.

Finding money through an Italian financier (there was only enough money for Cassavetes to shoot in New York and London, so the ’round-the-world premise got scaled down to the three husbands gallivanting across the pond for the second half of the film), Husbands finally had a cast, a greenlght and Cassavetes was riding high on the praise for Faces, which was released around the same time (1968).

Writing the script for Husbands through rehearsals Cassavetes, Falk and Gazzara did a few months before shooting, like all his films Cassavetes was looking to capture true emotion and eliminate all cinema cliches that he thought plagued Hollywood. Many at the time thought the three actors were just goofing around while the cameras rolled, building the Cassavetes mystique that all his films were heavily improvised. But, as Gazarra states in the featurette on the disc, there were only a few times when they went off page. The singing contest scene, which is one of Cassavetes’ most entertaining long scenes out of all his films, was made up on the spot after Cassavetes threw away the original scene of the three husbands sitting at a bar discussing the meaning of life. There are moments when the actors would adlib, but even that quickly crafted scene had a structure that Cassavetes stressed everyone to follow.

Like most of his dealings with studios, this one would be filled with confrontation. Cassavetes and Columbia fought throughout post on the length of the film. In fact, the cleverly created brief opening title card was done through necessity to save every minute for the film. At one point Cassavetes’ preferred cut was running at 225 minutes, but got it down to around two-and-a-half-hours for the release. Columbia still wasn’t satisfied though, so during the film’s release in 1970 it cut 11 minutes out of the prints, though it was in violation of Cassavetes’ contract he didn’t have the strength or money to fight it. The 11 minutes (the last nine minutes of the singing contest scene and the first two minutes of the vomit scene) are in the film for this release for the first time since Cassavetes showed around his own cut of the film to promote the theatrical release.

The vomit scene is another thing that Colombia (and even some of Cassavetes’ crew) hated. It follows the singing contest at the bar where we find Falk and Cassavetes hunched over toilets. You don’t see anything, but there are loud vomit and farting sounds throughout the scene.

A lot of people got uptight about the scene in which Peter and I vomit in the men’s room of a bar. The characters weren’t vomiting just because they happened to be drunk; they got drunk so they could vomit — vomit for their dead friend. Some people may find that disgusting, but that’s their problem. When somebody dies, I want to feel something. I want to be so upset that I could cry, throw up, feel the loss deeply. If that offends some people, then let them be offended. I was watching television one night and the news come on and it said 500 people in Cleveland got up and left the theater, en masse, and the name of the picture was Husbands. [Laughs] I could only laugh at that because I thought, “Jesus, what did that contain that could affect them so?!” I’m such an optimist. I think, isn’t that marvelous that you could make a picture that can scare 500 people out of the theater without having a moment of violence, a moment of anything that would be any way near controversial. Just the idea that people behaving in a way that is not acceptable can take 500 people and throw them out of the theater! Now, I’ve been bored with pictures, so if it’s a boring picture I just sit there and at a certain point I say, “Let’s go,” but I won’t get up and leave with 500 people because it’s boring, so it must be doing something else to an audience.

Like anything Cassavetes made there was always drama behind the scenes. But what he’s left behind is an amazing examination of human interaction and with Husbands we see his take on friendship and the trappings of marriage. The words that appear in the opening title card read “A comedy about life, death and freedom” and regardless if you agree with the husbands’ actions in the film or not you have to commend what Cassavetes delivered through a studio, and with its release opening the door for other unconventional titles to come out of Hollywood throughout the next decade.

Disc also includes a featurette on the making of Husbands and commentary by author Marshall Fine. You can purchase here.