“I Think You’re Confusing Me with Mike Myers”: Michael Moore Addresses his Fans at TIFF 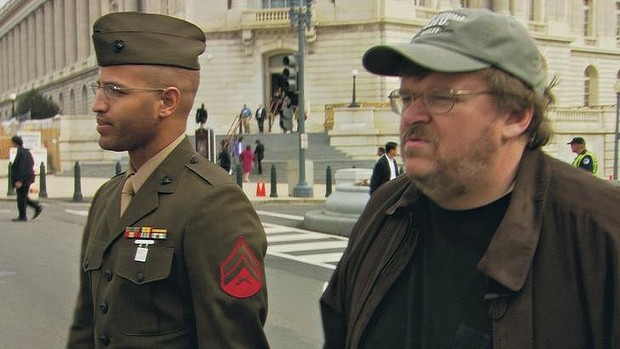 Where to Invade Next

With just a few hours notice, Michael Moore threw an impromptu party for his fans at the Toronto International Film Festival this week. Announced on Facebook, an afternoon People’s Party welcomed the first 100 folks who lined up outside a Mexican restaurant down the street from the TIFF Bell Lightbox. Also getting in were the first 100 ticket holders from the premiere of his latest doc, Where To Invade Next.

The film’s a road trip that spotlights economic and political policies in other countries that Moore feels America should have. For instance: Italy, where workers get 35 days annual paid vacation; Portugal, which has successfully decriminalized drug use; and Slovenia which offers free post-secondary school education.

The People’s Party was Moore’s way of speaking directly to his audience by avoiding the filter of the press corps whom he addressed already at a press conference. Moore looked winded as he held court with his adoring fans, but he gamely answered questions for Filmmaker about America today:

Q: Any thoughts on the U.S. election?
Moore: I think they should hold it, hold the election next November.

Q: Prediction?
Moore: Someone will win, and it will be a man or a woman.

Q: How will the Detroit Tigers do in the next few years?
Moore: Not well.

Q: Sorry for [Toronto] taking [Detroit pitching ace] David Price.
Moore: No, no, no. Everyone wants the Blue Jays in there. Let the Canadians in!

Q: When was the last time you were in Detroit?
Moore: A couple of months. It’s got a long way to go, but a lot of people are trying.

Q: A lot of artists are moving there. Any thought of locating there?
Moore: No, no. I put in my time in Flint [Michigan, as captured in Roger & Me]. I already got the golden ticket to get through the pearly gates for that. I’m just trying to take care of myself at the moment.

An assistant handed him a bottle of water which revived Moore. Later, he grabbed a microphone and answered questions from the audience, starting with his thoughts on the current Syrian refugee crisis seizing Europe.

“You mean the American-caused refugee crisis in Europe?” he snapped, the fire returning to his voice. “Let’s call it for what it is. We completely dismantled the Middle East. We tore apart its infrastructure politically, literally and spritually.” He then applauded Germany for taking in refugees and building schools for them.

Someone in the crowd asked why he didn’t go to the U.K. to shoot his film. “Because we couldn’t figure out how to deal with our digust with the United Kingdom,” he answered. “I wanted this to be a comedy and there’s just nothing funny about Britain now, even unintentionally. They’re charging their college kids now to go to university.” He added that he didn’t choose countries, but rather “different issues and the things that surprised us,” such as Portugal’s successful drug rehabilitation program, or Austria lowering the voter age to 16.

In answering another question, Moore inadvertantly addressed a common criticism that he idealized the countries in his film. “We went there to pick the flowers, not the weeds. This is not a movie about all the problems,” he freely admitted, “and each of them has many problems.”

The best questions came from three young children. “You were acting as a director and an actor,” said an 11-year-old. “What made you think that would be possible?”

The crowd roared with laughter. “First of all, thank you for the acknowledgement that I was acting as a director,” Moore deadpanned. He admitted that it’s hard to be in front of the camera and direct it at the same time, and confessed, “If I was a real actor I might go to the gym a little more. Generally guys like me don’t like to blow themselves up on screen 50 feet.”

The boy pressed on: “Is this your first time acting other than in drama?”

Moore relented. “I don’t consider this acting. I think you’re confusing me with Mike Myers.”

Moore then related a surreal episode where he cameod in a fictional film (Nora Ephron’s Lucky Numbers from 2000). In one scene, Lisa Kudrow beats him. “So I said, ‘Nora, just let her bang my head on the floor. I’m a guy. I can take it.’ And Lisa goes, ‘Can I slap you too?'” Fifteen takes later, Moore’s head was pounding and he swallowed a fistful of Advils until his stomach burned. He was rushed to a hospital and given Demerol. “So I’m totally loopy and they finally bring the doctor in and on his white coat — I swear to God — it says Kudrow.” The doctor confirmed his name. Moore said, “That’s so funny, because the woman who put me in the hospital, her name is Kudrow.” The doctor replied, “That’s my sister.”

The child then asked, “What’s the hardesst thing about making a movie?”

“Trusting myself,” Moore answered seriously, “not listening to my inner critic that’s telling you what you’re doing is really dumb or not right. Just cut that off. Trust yourself and try to stay true to who you are.”

After a moment, Moore looked puzzled at the two 10-year-olds and the 11-year-old. “By the way, how did you three get into a bar?”