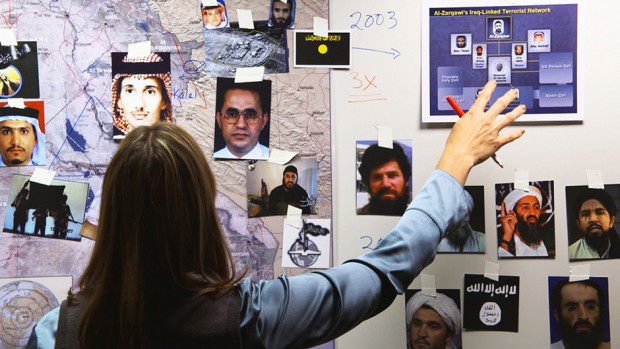 Manhunt: The Search for Bin Laden

by Scott Macaulay
in Interviews, Producers
on Sep 22, 2015

One of the most prolific documentary producers around, Julie Goldman, takes the main stage this afternoon at IFP’s Screen Forward conference to talk about the evolving practice of non-fiction production. With producing credits going back to 1997, Goldman has produced or executive produced such notable films as Buck, Beware of Mr. Baker, 1971 , Best of Enemies and Manhunt: The Search for Bin Laden. She’s currently producing through her production company, Motto, which has allowed her to increase the quantity of her production, just one of several topics she discusses below.

Filmmaker: Your producing credits go back to 1997, yet your production company, Motto Pictures, dates more recently, to 2009. For a documentary producer like yourself, what does it mean to be producing through a continuing venture like Motto as opposed to on your own? How does the Motto doc producing practice differ how you were producing previously?

Goldman: Prior to Motto, I worked as head of original production at Wellspring and then was a partner in another company where I was executive producer on many documentaries. With Motto I wanted to find a combination of the freedom and autonomy I had years before as a freelance producer, while building a new company where we could move between producing and executive producing. I wanted to get back to the full immersion of producing and started with Cindy Meehl’s directorial debut, Buck. It was really the perfect film to start with — a particularly strong collaboration and a successful launch. After that, we were able to feel a bit less constrained in making choices on new projects and shaping the vision of the company, which is essentially to work on films that we feel passionate about and take the time to enjoy the process. We have a great team at Motto. There’s my partner Chris Clements, and Carolyn Hepburn, Sean Lyness and Marissa Ericson, who started as interns and then grew into AP and production coordinator positions. We move between complex productions and smaller, more intimate films and find a balance of films to work on each year. I feel really fortunate to work with many excellent filmmakers and to be able to collaborate on second and third films with directors and other producers.

Filmmaker: Your credits include an enormous amount of films. What types of roles do you take on? Does your job as producer shift from film to film, and how?

Goldman: Each film is a fresh slate in terms of what is most needed and how best to collaborate. As a creative producer, I work in partnership with the director on all aspects of production. I also focus on strategies for fundraising and distribution. I really love moving between these positions — it keeps things interesting. As a producer I am usually very hands on, ideally from the idea stage all the way through distribution. When executive producing, there are stages when I am similarly involved, but generally it is a less intensive role. I like to work on several films at the same time which means most of those are exec producing since full on producing takes more singular focus. Typically the ratio is one film as a producer to two or three as EP Also, I think it’s important to note that we team up with other producers on films — John Battsek and I have produced several films together. With 1971 I exec produced and Marilyn Ness and Katy Chevigny produced. And there are many other films where we work with strong producing partners and when you can share the workload it takes pressure off the production and gives the director more support.

Filmmaker: Could you address the question of volume? Is there a certain number of films you need to have going at all times in order to sustain your career as a producer? What demands do the current marketplace place on the work life of independent documentary producers?

Goldman: We definitely need to have multiple films in production at the same time — first because it often takes years to finish these films and we may not get paid until late in the process, since we are usually fundraising well into post-production. The way the production schedules are staggered while working on several films allows us to keep focused on each one during all of the most critical phases and still have enough income to keep afloat. Many times we have films finishing around the same time (for deadlines such as Sundance) even if they started years apart, which can be a big challenge. We probably have eight-to-ten films in some stage, in development, production, post, or even in theaters, or in the midst of an engagement campaign, which still takes time and energy. The key for me is to be completely focused on each film individually and to have time to really dive in. So I had to let go of some things I used to control, things like doing contracts myself — I have a good bookkeeper and accountant and a great lawyer (Jonathan Gray) — and share these tasks with the whole team. In terms of the marketplace, we have had to be more creative about financing and distribution; I have been trying to make sure we have at least one or two films each year which are fully financed early on because it is too difficult to raise funding for multiple films without competing against ourselves. We work with all the major doc broadcasters and distributors, we receive grants, have international co-productions and work with equity investing partners. With each film, we have to be clever about whether we are going to a broadcaster or keeping all rights and funding through equity and/or grants. We have to find the best approach to finance while keeping the festival and distribution strategy in mind throughout the process.

Filmmaker: In what ways is the current documentary landscape shifting behind the scenes in terms of its economics that the beginning director and producer might not know?

Goldman: I always think there should be a plan A, B and C for the film from early on. What’s the dream, and then if that doesn’t quite happen what would be the next best plan. How does your film get widely seen, do you want to change policy, do you want it to screen internationally. Try to set realistic goals.

You have to be very careful about where you get your financing because it can impact your distribution possibilities. For example, many theatrical distributors have output deals with broadcasters so if you have broadcast funding it may make it more difficult to get theatrical distribution for your film, yet often that is the only funding that you can get to make your film. Or the promises you make to your crowdfunding campaign conflict with your distribution. Or Netflix will want as many (or all) territories as possible so if you’ve done multiple international co-productions, that can affect the ability to work with Netflix. And there are less documentaries doing significant box office this year, so is that a trend or will it continue in that direction? And will VOD and digital platforms start to really generate revenue? It is always shifting, and you have to make sure you stay aware of these changes or find someone who is to guide you: a really good lawyer, sales agent, consulting producer.
One very positive development is the recent acknowledgement and discussion about sustainable careers and earning a living wage. This is finally a real discussion with the wider documentary community, and I am hoping it leads to a significant advancement.

Filmmaker: Similarly, what are the narrative trends emerging in terms of documentary form? Character-based docs have been the rage for a while, but are new methods of distribution and audience-targeting allowing documentarians to experiment with different approaches? And, what type of doc storytelling techniques appeal to you the most?

Goldman: I think the key is always story and characters and the challenge is to craft the story well. I love films that push into the grey area between fiction and non fiction but it is an art and tough to achieve that real balance. This is an area I’m hoping to move into more. We are starting to work on a film that will blend narrative in a fascinating way. We are also working on a film that incorporates animation is a very different way and that’s exciting to explore. I also like the freshness in short form that we can experiment with and that is a new direction for us; we have shorts with CNN Films, The New Yorker/Amazon/Jigsaw, Netflix. and that has been very liberating. There are great stories that can be told best in short form. Also, when there are story lines that break your heart to cut from a film — now you can create a piece for NYT Op-docs or The Guardian and have that promote the film, rather than in the past where it would be stored somewhere as a DVD extra.