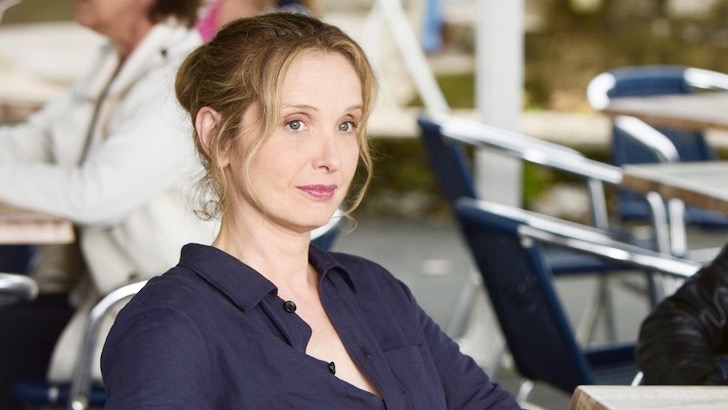 by Taylor Hess
in Directors, Interviews, Screenwriters
on Oct 5, 2015

“She’s an auteur,” Eugenie Grandval tells me. “She has a lot to do on set between directing other actors and creating as she goes. I’m just there to be supportive.” Grandval is the co-writer of Lolo, a comedy about a single-mom whose love life is sabotaged by her only child. The auteur whom Grandval is referring to is her co-writer and the film’s director and star, Julie Delpy. Together, the writer duo recently traveled from Lolo’s world premiere at the 72nd Venice International Film Festival to their North American premiere at the Toronto International Film Festival.

Several decades ago, Delpy and Grandval also embarked on identical travel routes. Both were moving from France to study in New York — Delpy at NYU’s Tisch School for Drama and Grandval at Columbia Law School. They didn’t meet though until years later, back in Paris, after Grandval quit practicing law to work in film: first in business affairs, then development, producing, and writing, and after Delpy became a movie star and Oscar-nominated screenwriter. Grandval had moved back to Paris to work as a ghostwriter and met Delpy through her husband, Lolo producer Michael Gentile.

“The idea for the film came about very naturally,” says Grandval, who has more in common with Delpy than writing, a bi-coastal and transatlantic career trajectory, or a multifaceted resume. In two separate conversations, I catch glimpses of similarities as they each reflect on the Hollywood system, the creative process, and a career evolution from childhood to family life today.

“I was raised by two actors,” says Delpy, “so I know how sensitive and fragile it is to be in the state of acting. It’s like reaching deep inside yourself — even in comedy — for truth.” This is perhaps the most romantic it gets in our conversation about acting. Delpy is mostly realistic and practical in discussing the brutal pursuit. “I saw my parents go through it in the theatre. I saw how depressed they were when they didn’t work for a year. You have long periods where you have nothing. You can even work like crazy and then still have nothing for ten years. It’s really depressing. I don’t think there’s one place in the world where being an actor is a comfortable position.”

Grandval supposes she initially went into law to avoid the discomfort of artistic pursuit. Having also grown up in a family of French artists, she sought structure as a reaction. Looking back, she says, “I should have known that law wasn’t my passion. It’s always better to work on your passion as early as possible.” Grandval doesn’t beat around the bush of regret. She tells me how she would have gone to film school if she could do it all again. She would have liked to study the physical and technical aspects of film, to have learned more about on set production or line producing, to be skilled in more capacities. She’s built a career between writing, developing, and producing films, but not surprisingly, she’d like to do more. It’s not as if the days have longer hours, but today’s culture certainly fosters more multi-taskers.

Working simultaneously as a writer, director and actor is not a challenge that Delpy entertains. “I try not to think about the difficulty of doing all three. The less I think about it, the better I am,” she says. “It’s an exercise, like stretching or any skill of any kind. The more you do it, the more natural it becomes. It’s like playing the piano — you need to practice doing one side and then the other until you can do both sides at once.” But directing, acting, and writing aren’t all part of the same instrument, I reason. I press Delpy about the different skills required for each. “In a way, they’re opposite, but in a way, they are the same. Complementary,” she clarifies. “As a director, you have to be in control. And as an actor, you have to let go. I don’t feel vulnerable as a director, meaning the moment I’m directing, I feel very grounded. When I’m acting, I don’t necessarily feel the ground there.”

“Total freedom comes in the writing,” Delpy continues, “because you aren’t dealing with anyone except yourself and maybe a co-writer.” She’s accustomed to collaborating, most famously on the Before Sunrise, Sunset, and Midnight series with Richard Linklater and Ethan Hawke. She tells me that writing each film was different, that one was almost entirely penned over email correspondence. “There’s no specific recipe to write. But usually the best thing to do is to just sit down and have a conversation about the sense of the characters and the sense of the film. It’s never a waste to spend a lot of time on that.”

With Lolo, Grandval focused on the framework while Delpy contributed scenes, and the two had sessions together to decide what to cut, keep, or change. Grandval reflects how writing her first feature taught her how to better empathize with writers and how to surrender control to the director. She describes watching from the sidelines while “Julie played with such spontaneity, creating and improvising on set. Many ideas that weren’t in the script made it into the film because that’s what scripts are — blueprints for films.”

But spontaneity on set is a result of rigorous preparation, maintains Delpy: “I leave very little room for the unexpected to happen, and then obviously, the unexpected always happens, so I have to change things.” If this is any cause of frustration, Delpy doesn’t let on. Instead, she tells me how exhilarating she finds directing, that it’s what she likes most about working in film, having long ago dismissed the prospect of Hollywood stardom. “I think I wasn’t ready to just be a Hollywood actress. Making those films didn’t fulfill me, so I did the right thing to become a director. And now, the Hollywood side is less scary.”

Delpy is first to acknowledge that Hollywood is less formidable for her now that she’s Julie Delpy. She doesn’t have to audition or prove herself because “people either want to work with me or they don’t.” Again, she reminds me how depressing it is to be a struggling artist, how “some people spend their lives never making it, and it’s a misery, you know?” She’s hyper-aware how the situation has changed for her, with fame, but that for others, “it’s still a living hell. Not that it’s Hollywood’s fault. It’s the nature of the business. And it’s not just Hollywood. It’s everywhere.”

France, for example, is described by Grandval as “a great system, but a closed system. You have to have the card to the club.” France, like other European film industries, offers public financing and co-production opportunities, but for Grandval, who spent the majority of her career in the states, the key to the club isn’t in her pocket. “I’m always going to be an outsider, I think,” she says, referring not just to working in France, but to her experience in LA and New York as well. I wonder whether a lifetime of cultural polarity, of having to assimilate into the fabric of a place without having permanent roots, is disorienting. Grandval doesn’t seem to mind feeling the chaos of being bi-cultural. She likes the freedom of creating projects where she spends time. But I’ve got the sense that Delpy depends more on stasis to stay grounded. She tells me: “I never get out of my house. I spend my life cooking and writing and taking care of my kid, basically. You need peace and happiness in the home. You see people who don’t have it, and they can’t go anywhere. They lose it. I’m hoping to direct movies for a long time, so I have to stay on the ground as much as possible.”

Delpy is referencing the more psychological aspect of being grounded than the literal geographical sense, but somehow, the two seem correlated for her: physical stillness quiets the mind. Grandval, on the other hand, seems to gain perspective by not staying in any one place too long. She describes having to adapt to different work environments and landscapes within a perpetually evolving industry: “The film industry has shrunk tremendously in New York from when I started in the late ’90s. Back then, there were so many companies founded by studios, and today that world has completely changed. Those companies have either moved or disappeared.” As the industry transitions, I can see how mirroring that mobility feels natural, grounding even. Now that Grandval mostly works in LA when she travels from Paris, she explains that it’s worth wading through the superficiality “to feel in the center of something.” And besides, “I like LA now. I think Americans are more open-minded about working women,” she drops casually.

One particular American six-year-old isn’t too open-minded when it comes to his mother’s movies of “just people talking all the time.” But he’s certainly open-minded about alternative ideas, especially when they’re his own. We may just yet be seeing a Julie Delpy/Eugenie Grandval penned pirate adventure film down the pipeline because “why not?” giggles Delpy. “I want to make a movie for my kid!”