Rumble in the Jungle: Beasts of No Nation 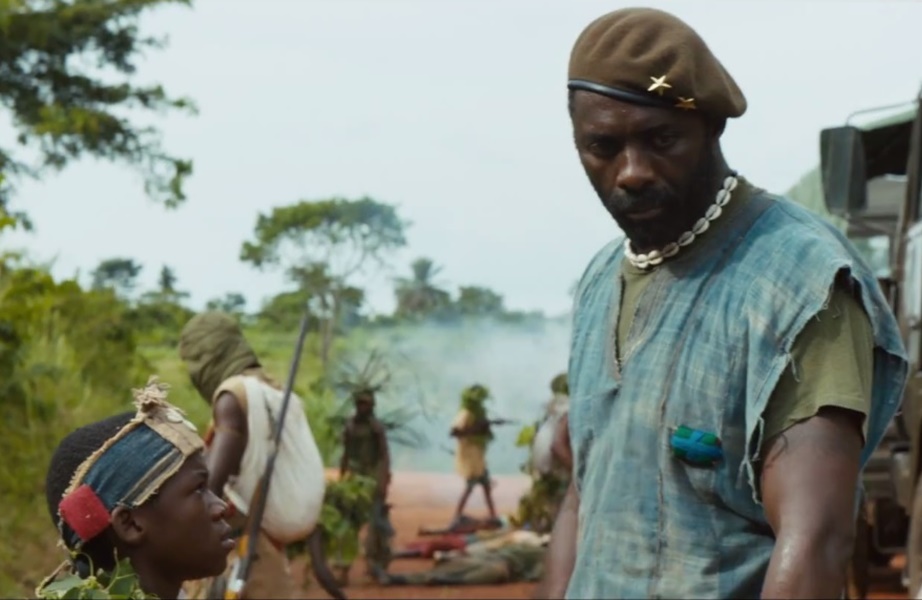 Abraham Attah and Idris Elba in Beasts of No Nation

While undergoing mandatory initiation — some of it colorfully ritualized, some deeply humiliating — into a unit of mostly adolescent anti-government soldiers in an unnamed, junta-led West African country, pre-teen Agu (Ghanaian first-timer Abraham Attah, a natural on camera) is deposited by these potential comrades-in-arms in a fully dug grave. “You must die before you are reborn!” booms the voice of the Commandant (Idris Elba, in a tour-de-force), a man who can be either extremely sweet or violent but not much in between. Beasts of No Nation, directed by genre-magician Cary Joji Fukunaga (Sin Nombre, Jane Eyre, True Detective), has been labelled and marketed as a film centering on the young combatant, but the formidable Commandant is no less a principal subject.

To reinforce the symbolic significance of death, they add Agu to the other candidates for membership in this fairly autonomous rebel group lined up in front of a firing squad, which executes them with blanks. He passes muster. (Shortly after, the visibly shaken, hesitant boy is forced to kill a pleading prisoner with an ax to the skull — but the sudden rush that overcomes him will motivate him in upcoming confrontations.)

These murders may not be fully distinctive from the real thing in their culture, but they are, for Agu, nothing compared to the ongoing cycle of death — the decimation of character, belief, and spirit — which he endures from the time he is captured in the wilds by these revolutionary PDF soldiers in feathered camouflage and metal helmets until the understocked battalion dissipates in a single moment. Not long before, this boy with the wide enticing smile had been a playful jokester, devout Christian, devoted son and brother, and class bookworm psyched to study medicine, living with his family in a backwater that had been uselessly designated a buffer zone between warring factions. The old way of life also disappears in a nanosecond. 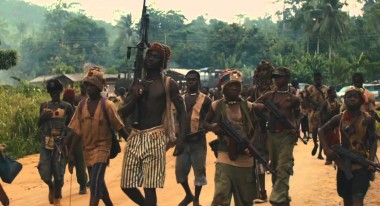 Military politics indirectly rupture a budding affectionate relationship between the demanding, manipulative powerhouse of a Commandant and the loyal, obedient boy — oedipal, but with decidedly tribal markings, fueled by flattery and extra perks. Agu’s single genuine human connection is with mute Strika (Emmanuel “King Kong” Nil Adom Quaye), who reminds him of the pals he used to horse around with before he was drafted. They forge the kind of loving, mutually protective, all-or-nothing bond that typifies close friendship in childhood, but begins to wither upon entry into adulthood. They play hide ‘n seek as if they were little kiddies: Each is the other’s respite. Strika is the one person waiting for the gullible, devastated boy after he has been fully taken advantage of, an intimate follow-up to the trusted chief’s one-on-one lecture on “keeping secrets.”

The Commandant’s urbane, high-living superior, the Supreme Commander (Jude Akuwudike), resides in a luxurious home in the city, where he serves an ostentatious spread to these peasant kids while he verbally dismantles and demotes their leader. “It has now become a battle for public image,” the head honcho tells this earthy warlord who knows little about war outside of combat and raking in the spoils. Setting and protocol stand in stark contrast to the unaccommodating jungle that has been their stomping grounds, save for a few sorties into urban areas solely to do battle.

As much for balance as to play paterfamilias for his youths, the Commandant ushers them into a low-rent brothel after leaving the Supreme Commander’s gauche home. While the other fellows lose their virginity, Agu and Strika nonchalantly watch TV in the main room. They are not quite ready for the mission, although Agu does sneak some peeks at the young girl who tends to the place. Beasts of No Nation is not totally humorless.

In response to the new scenario, the young men exit the disturbing war-movie setting to venture deep into an even more disturbing “Heart of Darkness.” (“This is madness!” one frustrated conscript screams at the boss.) The battalion is no longer a group of imitation soldiers struggling for causes they never fully comprehended in the first place — their officers depend on brainwash weaponry like religion, vague or unsubstantiated accusations, jingoism, and the illusion of offense as self-defense — but simply a gaggle of thirsty, starving kids carrying rifles without bullets who have, in support of their Pied Piper of a leader, repudiated the westernized Supreme Commander.

The months of fighting, foraging, joshing, singing, dancing, and snorting brown-brown (a potent mix of cocaine and gunpowder) — how many is impossible to know in this twilight zone — have forged a nearly unbreakable kinship with this warlord, who shamelessly tells them, “We should take our own territory and fill our own pockets.” A nearly unbreakable bond. It doesn’t help the Commandant’s case for continued solidarity when he publicly torments a dissenter, warning that if he leaves he will have nothing ahead, be shunned in his own village, and face charges of war crimes, adding that he is “stupid” and has “a poor uneducated mind.” Everyone has a threshold for sadistic treatment. 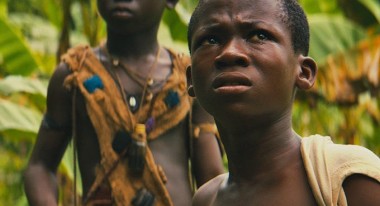 Agu survives. How many more times could he die? Family all gone, soldier pals murdered or scattered, a pariah should he return to his home town: Only the UN or some NGO might help him restore the pieces of a mind not yet fully formed. “I am thinking about my future,” he tells a sympathetic listener, noting that he has been “part beast or devil.” It’s both refreshing and cathartic to hear him own up to the recent past and look forward positively after the near-demise of his soul and the executions and brutal torture he has carried out. Ironically, he has committed the same atrocities that the government forces had inflicted upon his immediate loved ones and town at the time his childhood was so abruptly terminated.

Fukunaga’s heart does not appear to be in the urban landscapes: It is in the wilds. In widescreen he captures its sensuality, multiple textures, and vibrant colors. It is gorgeous and seductive, the occasional close-up of an insect or a leaf, or shot of a moody sky, amplifying the breathtaking, nearly hallucinatory effect. Enhancing these rich images in a film in which visuals and music carry the story much more than dialogue is Dan Romer’s eclectic score. Horns, percussion, organ, keyboard, strings, flute, and clanging bells combine and compete, volume raised or lowered, notes held or not as required to sustain both the feel of a thriller and a spiritual undercurrent. When appropriate, he inserts bits that evoke melancholy or joy, at the same time insuring that monotony does not become a distraction.

Not to force a point, but the threat of death hung over the shoot itself, as if an echo of the storyline. Production facilities were set up in Kenya until the 2013 Westgate shopping mall massacre in Nairobi altered the plan. The team settled on hot, humid Ghana, in spite of the lack of film infrastructure, because of its urban locales and abundance of verdant, unspoiled nature that recall sites in Nigerian-born Uzodinma Iweala’s 2005 novel from which the film draws its title. (The book does not, however, lend its style to the narrative, except for Agu’s voiceover that subs for the written version’s first-person point-of-view. Fukunaga goes for a linear approach, eschewing the memory-triggered temporal shifts in Iweala’s prose.)

The shoot was then delayed for a week after Fukunaga contracted a severe case of malaria. The DP tore a ham string on day one of filming, so the director, an excellent cinematographer, took over that job too, frequently strapped to a Steadicam. By the end of production, he was playing host to an intestinal parasite. When a tree branch Elba was leaning on snapped, the large actor nearly tumbled 90 feet down to a pile of rocks. Lest I forget: The crew was held up by bandits. I read that the British-born Elba, whose mother is Ghanaian, helped rescue them from several borderline disasters.

Beasts of No Nation is extraordinary, but even if it had been a misfire, it would deserve a slew of gold stars for perseverance and chutzpah. That goes for its controversial release pattern as well. Theater owners are having hissy fits that Netflix’s first feature production will be available on DVD and by streaming two weeks after its British theatrical debut, which is one week before its American bow. Some exhibitors have threatened boycotts. On whichever side of the argument you stand, foregoing the thrill of watching it is your loss.