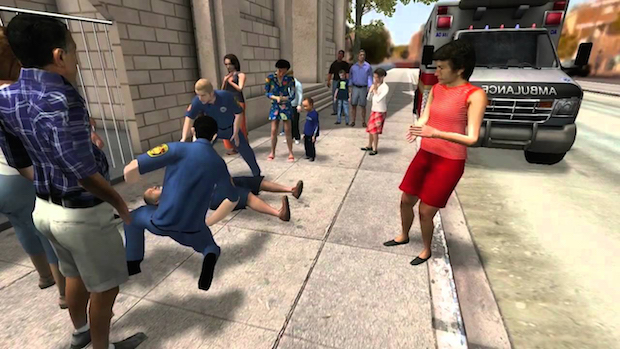 Last year’s New Frontier section of the Sundance Film Festival included 11 virtual reality projects, helping sanction a technology that, like 3-D, has come and gone several times in the past but suddenly seems to be everywhere. Filmmakers, game designers, media artists and storytellers of all kinds are exploring a new language of story experience, while culturally, pundits are pondering the benefits, and problems, of VR, as evidenced in Maria Konnikova’s “Virtual Reality Gets Real” piece in the October 2015 issue of The Atlantic. Last April, The New York Times Magazine took things a step further with a cover for which street artist JR created a 150-foot tall image on the street, which was in turn captured by Chris Milk’s company VRSE to create a VR experience. This is all to say that VR is back, and it’s not only compelling to the scientists and enthusiasts of earlier generations; its reach this time around is far broader. How, then, are schools responding?

Dan Pacheco, the chair of Journalism Innovation at the S.I. Newhouse School at Syracuse University, two years ago experienced Nonny de la Peña’s VR project Hunger in LA and found the experience transformative. Because his academic duties include investigating new tools and technologies for innovations in journalism, he began to learn everything he could about VR. Last spring, he collaborated on a VR project chronicling the plight of Iowa farm families titled Harvest of Change, which won an Edward R. Murrow Award, and he now serves as a VR consultant.

Using his self-education, Pacheco has developed a course called Virtual Reality Storytelling, which, in its two iterations so far, has attracted students from journalism, computer science, film, engineering, architecture and advertising. The class presumes no prior experience in 3-D modeling or VR storytelling.

Pacheco begins the class with an overview of VR and an exploration of the various headsets available. Then the class dips into Unity, a 3-D game engine. “I teach them how to create simple scenes, but we don’t get into the weeds — this isn’t a software and tools class. I teach the very basics.” If students want to investigate further, Pacheco directs them to a full array of tutorials and admits that, quite often, students do go much further. “However, at the end of the day, if a student creates a final project that doesn’t have a compelling story, they’re going to fail,” he adds. Pacheco reports that his students are often extremely frustrated at the beginning as they try to learn the software. But once they’ve created a scene, and stepped into that scene with a headset, everything changes. “All that anxiety goes away and they ask, ‘What else can I create?’ They’re hooked.”

Reflecting on the sudden excitement around VR, Pacheco says, “Ultimately, it’s that you feel like you are somewhere else. ‘You are there,’ as Walter Cronkite used to say. So you experience presence, but somewhere else. In a story, whether you’re trying to entertain or engage people, the way you tell that story in this new form is about creating an experience and letting people uncover the story as they go through it.” Pacheco has used the term “experiential storytelling” to characterize this form.

Media artist Caitlin Fisher’s background is very different than Pacheco’s and represents another vector of artists and designers interested in VR. Her Ph.D. dissertation was a hypermedia work that includes 40,000 links and pathways, and she has won awards for her electronic fiction. “Creating the dissertation changed my practice as a fiction writer,” she says, explaining that she became intrigued by spatial narrative and stories set in space.

Fisher now explores spatial narrative as the co-founder of the Future Cinema Lab at York University in Toronto, dedicated to investigating the future of narrative through its myriad permutations. Fisher also teaches the university’s Future Cinema course, a two-part experience covering history, theory and practice, and building from the work of Gene Youngblood’s description of an “expanded cinema” from his 1970 classic book of the same name. Past versions of the class have covered immersive and augmented and mobile cinema, and the ruminations about the future are linked with an awareness of past experiments, which are so easily forgotten. “One of the things that I will do this year in the class is talk about the relationship between shooting 360-degree imagery and the Oculus Rift, and competing visions, such as Augmented Reality,” Fisher explains. “What is at stake in the digital overlay with the physical world, where the world is still a constituent, versus all the bells and whistles of VR?”

Fisher also historicizes VR, highlighting its roots. “Because the origins of this work are in computer science and military labs, we don’t have a wide variety of storytelling techniques for cinema yet,” she says. “We’re just getting to a poetics of VR and AR, and I’m interested in having students rethink mimesis. I try to talk, too, about early funding models. We have $1 million to create a VR experience of Pompeii, but not to give that kind of access to poets and artists.”

Fisher enjoys the ways in which ideas related to spatialized storytelling invite students to reconsider the conventions of traditional storytelling that have become so internalized as to seem entirely natural. “In VR, we don’t have point-of-view editing anymore. This lets students see what they can’t do, and this in turn helps them realize the unconscious of their own practice.”

As professors dedicated to exploring the future of storytelling, both Pacheco and Fisher are intrigued by the growing notoriety and prevalence of VR. However, there are also some fears. Pacheco reveals his: “One of the things I worry about is the fact that, in VR in particular, it’s not that you’re seeing things that aren’t there, but that there are parts of your brain being activated that no other media form has been able to activate in the past,” he says. “It’s almost like you’re hacking into people’s brains.” He is also concerned about the intensity of some of the experiences, and how they might affect different viewers. If a person suffering from PTSD steps into a violent scene, what could be the consequences? “So what this means is that there is a whole new set of ethics, a set of dos and don’ts, developing. We need to explore this together. We need to model good behavior and set up good ethical guidelines now.”