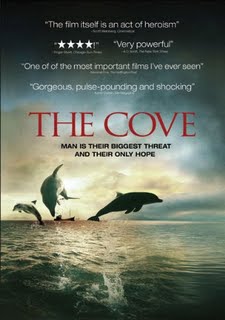 That’s a line given in the beginning of Louie Psihoyos’s gripping documentary, The Cove. And the man who says it, Ric O’Barry, is one of the most intriguing subjects in a doc you’ll see this year.

Ric O’Barry captured and trained the five female dolphins that played Flipper in the 1960s TV series. He lived twenty steps from them for close to ten years. But everything changed when Cathy, the lead Flipper, committed suicide in O’Barry’s arms. The next day he was arrested for trying to free a dolphin from a marina and has spent the last 35 years trying to destroy the industry that he helped create.

Japan has brought the greatest harm to dolphins and Taiji, Japan is its torture room. This small, unobtrusive town — that if you glance at it looks like the biggest fan of the mammal — is, as O’Barry puts it, “the little town with a really big secret.” In a tiny lagoon in the town dolphin slaughtering takes place daily.

O’Barry has spent decades trying to expose what’s going on in Taiji. He’s brought out the BBC, London Times, Time Magazine and countless activists, but all have come away empty handed. Bullied and annoyed by fisherman until they are forced to leave, there is still no proof, only speculation of what goes on in the cove.

Psihoyos, who along with being a renowned photographer, created a nonprofit foundation, the Oceanic Preservation Society,met O’Barry and after hearing his story decided to take on the challenge of revealing what really goes on in Taiji. Enlisting a motley crew of thrill seekers and activists, Psihoyos and his team head off to Taiji to discover the truth. Using high tech gadgets, underwater cameras and covert cameras made to look like rocks and bird’s nets, we follow the team’s mission. Difficult to watch at times, it is visuals everyone should see and will hopefully help the survival of one of the sea’s most fascinating creatures.

Lionsgate releases the DVD today. Features include a commentary with Psihoyos and producer Fisher Stevens. A documentary on the hazards of mercury in fish and a behind the scenes look at how the covert cameras were created.

Read our interview with Louie Psihoyos.