“It’s Better Than Sitting Around Thinking About Dying”: Frederick Wiseman on In Jackson Heights 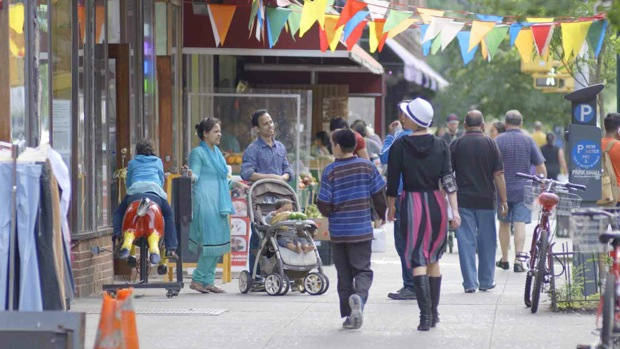 by Trevor Hogg
in Directors, Interviews
on Nov 3, 2015

Having to reschedule interviews is nothing new, but when it’s because the filmmaker has to attend a rehearsal for a ballet adaptation of his 1967 debut film, I have to count that as a first. Titicut Follies — the collaboration between Frederick Wiseman, contemporary ballet choreographer James Sewell and musician/composer Lenny Pickett — was given a preview during the 40th Toronto International Festival ahead of the ballet’s October 2016 premiere at the Skirball Center at NYU. However, the topic of our conversation was the North American premiere of In Jackson Heights at TIFF, with Wiseman arriving shortly after giving an introduction at the initial public screening at Jackman Hall. “It’s better than sitting around thinking about dying,” observed the 85 year old, who has made 40 documentaries and is only rivaled by octogenarian Clint Eastwood and soon-to-be-one Woody Allen for productivity. “It’s not like I can specifically say that I learned XYZ [from producing In Jackson Heights]. I’ve been making movies for 49 years so I’d like to think that I’ve learned how they should be shot, edited and how the sound should be recorded.”

“I’m no expert on what is going to solve the ethnic problems of the world,” noted Wiseman, who previously explored community life with Aspen (1991) and Belfast, Maine (1999). “In Jackson Heights, as you heard in the film, they speak 167 languages, there are people from every South American, Asian and East Asian country. There are also remnants of earlier waves of Jewish, Irish and Italian immigrants. They seem to get along alright. It’s not without tension but they exist.” During the nine weeks of shooting, Wiseman and his frequent cinematographer John Davey recorded street events, entered businesses such as clothing stores and bakeries, and visited various religious institutions: “There was no one place to go. I got permission from each of the organizations that you see in the film. On the street I did not need permission but when I went into a store I got permission from the owner. If I went into a synagogue or a mosque or church I got permission from the rabbi, imam or priest.”

Over 120 hours of footage had to be culled to produce a three hour runtime. “It’s a 1:40 ratio,” observed Wisemen, who spent 10 months editing. “For At Berkeley [2013] I had 250 hours. You have to sit there and try to figure out what the material is trying to say to you.” The Boston native was the director, editor, sound recorder and producer for In Jackson Heights. “I like doing all of those different elements. It gives me complete control over the project, which I like. You can have good rushes and screw it up in the editing. You can have mediocre rushes and improve it in the editing. If you are lucky you’ll have good rushes and edit well. The sequences in the movies are always much shorter than what they really were. It’s a question of editing them down to a usable form. I have to be fair to the participants but at the same time I have to create an internal rhythm within the sequence. That’s what editing is about. You can kill it by leaving it too short or too long.”

“There is a lot of music in the film because I came across a lot of music in Jackson Heights,” remarked Wiseman, who used a 633 field production mixer, which has an integrated recorder and some radio microphones. “I never add music. All of the sound is recorded at the place.” The vibrant colors were captured by a Sony F55 and shot in 2K and 4K. “Those street medley shots are used for a variety of purposes. They provide a pause between major sequences, they tell you something about the community, they tell you what people are wearing, they give you some sense of the street life. You see signs for stores that you don’t go into in the film but you do notice that they exist in the community, and you get a sense of the architecture of the community, so those street shots are very important for all of those reasons.”

“I needed extra money. That’s why I did Kickstarter but it didn’t work,” Wiseman revealed. “There are very few outlets for documentaries. There are only a few slots on public television and HBO shows a few. I’ve been lucky. Mine have all been shown at primetime on PBS and I have theatrical distribution.” The three-time Emmy winner is pleased with the festival reaction. “We showed it at the Venice festival and the response was terrific. It got great reviews. It’s going to be theatrically released at the Film Forum in New York on November 13th and be shown around the United States. It is going to be released in France in the late winter.” The veteran documentarian has not lost his enthusiasm for the medium. “Making movies is fun, demanding and interesting. Raising the money is not. It was just being persistent and approaching people until I got the money. It’s a tough career. I like doing it.” Wiseman added, “I want people to see In Jackson Heights. Some of the scenes are quite funny. It’s a fair portrait of daily life in this neighborhood.”