It’s an Ice Age-Flavored Dilution of Your Legacy, Charlie Brown: The Peanuts Movie 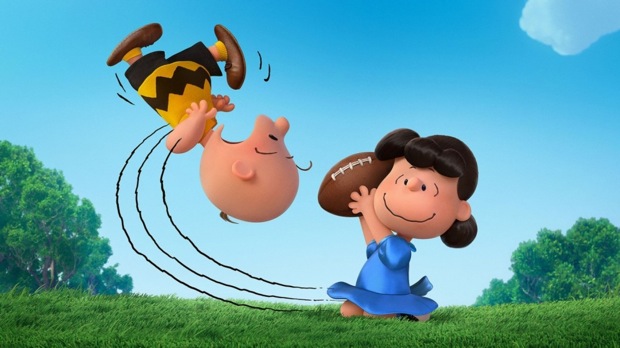 The two opening logos for The Peanuts Movie say pretty much everything about the two differing sensibilities birthing Charles Schulz’s characters into the 3D CGI 21st century. First there’s the 20th Century Fox logo, its familiar fanfare rearranged to accommodate Schroeder’s extra piano flourishes in front of the spotlight beams. Then emerges Skrat the squirrel, mascot of Blue Sky Studios, the animation studio whose signature product is the Ice Age franchise. In line with its competitors at DreamWorks and Universal Animation, Blue Sky specializes in a very particular kind of animated family product, one in which heavy-handed lessons are blended with admirably caricatured human and animal characters and wearisome action-comedy setpieces in which characters swoop around all over the place for some reason or other.

Obviously, this is not the mode of Schulz’s melancholy masterstroke. Very few bad things have been said of Peanuts, a surprisingly unquestioned touchstone of American pop culture given its slow pace and general sense of stagnant resignation. This ethos was more or less preserved in the TV specials and movies, complete with amateur-sounding children and becalmed tempo. These qualities were probably no-gos given the current kids’ movie landscape, so The Peanuts Movie is inevitably an exercise in triangulating the original look and feel, computer animation and the frantic japery of contemporary children’s animation.

Blue Sky is best with non-verbal animals who can’t Learn Lessons (every Ice Age movie goes rapidly downhill after the Wile E. Coyote-ish Skrat-vs.-world prologue), so Snoopy and Woodstock come out best. Bill Melendez is dead, but recordings of his growls, barks and squeals survive, and both characters are as endearing and charismatic as usual. A curious blend of mercurial whims, unflappable problem-solving and a plain strange imaginary life, Snoopy runs riot and gets the film’s best scene, the only one which genuinely expands upon Schulz’s work. As usual, Snoopy is stuck in his World War I headspace of combat battles with the Red Baron (what children will make of this I have no idea) and is on a mission to rescue his love interest; the animation seamlessly sets up a series of gags contrasting the imaginary landscape he’s fighting through with the banal neighborhood and nonplussed children he’s marauding across.

Snoopy is both best and worst served, because his WWI combat saga is “brought to life.” It was enough for minimalist Schulz to rest the beagle atop his doghouse and narrate his adventures in thought bubbles. Blue Sky, predictably, isn’t having it: there’s lots of corny aerial combat and zooming, as frantic and generic as any Marvel climax, a literalization totally at odds with Schulz’s spirit. Is this a necessary evil for the children’s market or just lapsing into an expected setpiece? (And is it really essential for Christophe Beck’s score to pastiche Mission: Impossible when Snoopy is trying to break into the elementary school? That’s one of the laziest musical jokes around.)

As you’d expect from a movie written by one of Schulz’s grandsons, there’s plenty of fan service, with appearances from all expected characters and nods to their greatest hits — Charlie Brown vs. the Kite-Eating Tree, Snoopy’s frustrated attempts to get into elementary school, Snoopy kissing Lucy, etc. etc. There are deeper cuts as well: i.e., this strip’s dialogue is repeated verbatim, minus the fourth panel (and to Lucy rather than Linus). But what’s superficial fidelity matter — and yes, I’m touched that even in CGI, the characters’ distinctive back-and-forth foot-swinging walk is replicated, and it’s all very mildly moving — when the ethos is all wrong? It’s kind of gross that the film stops to make a joke about Sally “cashing in” on Charlie Brown’s momentary popularity by selling branded gear on his behalf, given that the movie is itself a massive cross-marketing ploy, but since Snoopy is indelibly connected in my mind with wondering whether to purchase MetLife insurance I’ll let that pass. That’s not really the problem, and Schulz never had a problem taking the check.

I understand perfectly well that an apparently $100-million budgeted children’s entertainment is not going to preserve the strip’s depressive tendencies with fidelity, lest kids (or, more likely, their parents) be alarmed. (The CGI might be sacrilege conceptually, but it’s OK; everybody looks and moves right.) Here we enter the realm of SPOILERS (although come on): the film ends not just with Charlie Brown finally talking to the Little Red-Headed Girl (which he did on TV) but actively being affirmed by her. She tells him he’s not “wishy-washy,” but in fact kind and generous and a good person: the movie ends with a group celebration of how awesome Charlie Brown is. What is this? Charlie Brown was a miserable, self-locking child who would grow up to be a miserable, self-locking adult, probably a quiet barfly lapsing into increasing silence. That’s the whole point. The Peanuts Movie celebrates well-known character quirks, but it completely trashes the spirit of the strip. An unavoidable necessity? I’m forced to conclude this is perhaps the case, but it’s still infuriating.