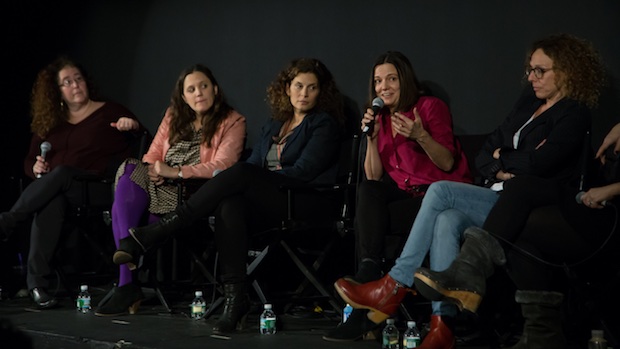 by Erica Ginsberg
in Festivals & Events, Filmmaking
on Nov 23, 2015

With more than 200 films and events, DOC NYC has become the largest documentary film festival in the United States. It has also become a must-stop for emerging and established filmmakers who want to deepen their craft through DOC NYC PRO, a series of panels and master classes with industry leaders. I attended the festival this week and my colleague Cheree Dillon and I live-blogged every panel for The D-Word, the worldwide online community for documentary filmmakers. What I came away with were four important things emerging documentary filmmaker should learn (and every veteran should remind themselves of as well!) in the rapidly changing field of documentary filmmaking.

Think about your audience early and often.
The conference dedicated a whole day to panels under the theme “Finding Your Audience.” Justine Nagan, the new Executive Director of American Documentary, Inc. and Executive Producer of the PBS series POV, drew on her prior experience as an independent filmmaker and Executive Director of Kartemquin Films, the Chicago powerhouse nonprofit production company. She advised doing research early on in a film’s production. “Is there an audience that might not be the usual suspects? What are ways to reach them that are DIY and low cost? Who can be your allies, advocates, and sounding boards for your project?” She spoke about her own experience with Typeface, a film she spent two years trying to get design organizations on board to help with outreach. This ultimately proved to be a smart distribution strategy since the film was not a traditional festival film but had a healthy life of screenings among design professionals and students.

Several panelists echoed the importance of thinking about audience early. “Work backwards and think about what you are in pursuit of with the film.” said Kelly Nyks (Requiem for the American Dream, Disruption), “This will inform your goals for distribution.” If you know your film and take the time to figure out where your audience is and the tools to engage them completely, a film can have a lot of impact. Distribution and Engagement Strategist Jennifer MacArthur (Borderline Media) advised against “boxing your film in with a platform that isn’t for your audience.” A social issue film aimed at reaching an underserved audience might not be a good fit for HBO if the target audience can’t afford cable TV, for example.

Crowdfunding is another way to build audience as well as raise funds. Benjamin May raised more than $50,000 for The Legend of Swee’ Pea , which premiered at DOC NYC. “Kickstarter backers become your first followers,” said May, “and they spread the word of the film and are rooting for you.”

Which brings us to our next takeaway…

Lots of filmmakers don’t enjoy making “the ask” when raising funds for their films, but speakers at a series of panels under the title “Show Me the Money” reminded filmmakers to think about fundraising not as a necessary evil but as a way of sharing your passion and building community around your film.

“I used to hate fundraising,” said Jen Brea, “but now I love it because it is a form of giving and receiving love.” The first-time director of the work-in-progress Canary in a Coal Mine raised nearly $213,000 on Kickstarter and has received additional support from Chicken & Egg Pictures, the Fledgling Fund and the Sundance Institute. “I am not asking for me, or even for my film, but about the power of the story of the film.”

Funders can be found anywhere, and you need to be ready with your elevator pitch. Dawn Porter (Gideon’s Army, Spies of Mississippi) recounted the story of chatting with a woman she met in a line at Sundance who she discovered was interested in the topic of her latest work-in-progress, Trapped; the woman ended up becoming a major funder. Porter emphasized how important it is to find your audience and go beyond the traditional film funders.

It is also about not giving up. While producing American Promise over the course of 13 years, Joe Brewster and Michèle Stephenson approached the Open Society Foundation, which was initially not interested in supporting the project. Brewster happened to be sitting next to one of OSF’s program officers on the subway and had a deeper conversation about how the project fit in with the mission of OSF and was given a second chance which not only led to a $50,000 grant, but also snowballed into grants from other foundations. As Brewster said half-jokingly, “Rule #16 for fundraising is you have to hit up people three or four times.”

Abigail Disney agreed: “Interesting support can come from people who are new to film as they become passionate advocates for your film.” Disney has seen fundraising from both sides – as a film producer who has raised more than $7 million for documentaries such as Pray the Devil Back to Hell and Armor of Light and now as a film funder through Fork Films. “Don’t give up on a funder until they’ve said the word ‘no’… Polite persistence comes from your passion.”

You are not just a filmmaker. You are an entrepreneur.
In addition to being comfortable asking for funding, documentarians who want a sustainable career need to think of their films and themselves as businesses. While many panelists acknowledged the challenges for documentary filmmakers making a living from their work, several had advice to weather these challenges.

For some, keeping a number of fires stoked simultaneously was essential. “We learned to have more than one idea ready to go really fast,” revealed Heidi Ewing who, along with her directing partner Rachel Grady has made films like The Boys of Baraka, Jesus Camp, and DETROPIA. “It doesn’t mean you are scatterbrained. It means you are smart.” She said that they will often have a film in post production while they work on a new film in the early stages of production. Producer Julie Goodman (Best of Enemies, The Great Invisible, God Loves Uganda) agreed it was important to have multiple projects in the pipeline, suggesting one approach is to balance work between funded works-for-hire and your own projects so you are not trying to fundraise from the same sources simultaneously.

Another approach to bringing in income is to look at producing branded content. “Branded content saved a lot of freelance journalists from having to leave the industry altogether,” said Jaron Gilinsky of Storyhunter, an online site which connects media-makers to media companies and brands with freelance assignments. Several panelists also cited examples of filmmakers who have successfully brought branding into their own work, such as Casey Neistat.

Monetizing outtakes by selling them to footage houses is another option. Mick Reed of Clippn, a wholesale stock footage distributor which connects content creators with leading stock footage sites like Getty, Pond 5, Shutterstock, and Videoblocks, recommended filmmakers “shoot the hell out of wherever you are going.” He suggested if you are traveling somewhere to film your own project, it would be worthwhile to shoot extra footage with a variety of wide shots, medium shots, and details for this additional market.

Several filmmakers advised applying for opportunities beyond the usual suspect grants, looking to academic institutions, think tanks, and even the US government. Yoruba Richen made The Promised Land after a fellowship in South Africa through the International Reporting Project at Johns Hopkins and another film in Brazil through a Fulbright grant. Hao Wu developed his current film People’s Republic of Desires in part through a fellowship with the New America Foundation.

Perhaps more importantly, filmmakers need to value their own work. AJ Schnack (Field of Vision) advised filmmakers not to give away their work for free. “If your only goal is to get your work seen by an entity, perhaps the money is secondary,” said Schnack, “but if your goal is to pay your bills, you need to fight for that.”

Support networks are essential whether institutional or informal.
As documentary filmmakers work hard to fight the good fight, it is important to know there are others there to help you through the battles. At panel after panel, filmmakers spoke to the importance of having mentors, colleagues and institutions there to provide moral support, guidance, constructive feedback and community.

“We need to be able to dream of making our stories in different ways,” said Maria Agui Carter (Rebel). “Labs are for dreamers to imagine something that is hard to imagine.” She was referring specifically to The Diverse Women in Media Residency Lab run by The National Association of Latino Independent Producers (NALIP), but could as easily have been referring to any number of labs and retreats offered to documentary filmmakers, from Firelight Media’s Producer’s Lab to BAVC’s Mediamaker Fellowship to the Camden/TFI Retreat. Some of these opportunities are by invitation only while others involve an application process and are open to filmmakers from across the country.

Film festivals can also be a space to connect with other filmmakers. “Getting to know filmmakers was great for me by being on the festival circuit.” said Farihah Zaman (Remote Area Medical), “You meet lots of people on the same track as you who become a team you can bounce off ideas or just discuss the process of filmmaking.”

Soliciting feedback from peers and beyond is also important to help filmmakers get outside of the bubble of the edit room. Even an Academy Award-nominated filmmaker like Kirby Dick (The Hunting Ground, The Invisible War) values feedback that can come from test screenings. He gets to a place where the film is coherent, perhaps it’s the second or third rough cut, and holds a series of test screenings on a weekly basis with both filmmakers and others. “Every comment is a clue as to what is not working,” says Dick.

Michèle Stephenson spoke of different kinds of support systems, including mentors who could “help with the craft, open doors, or connect us with other colleagues.” She spoke fondly of one of her mentors, the late St. Clair Bourne. While Stephenson also noted the importance of institutional support networks, she added that support can come from other filmmakers. “It’s a marathon, not a sprint. You need a cup of water along the way. That may not come from someone of power but someone who is going through the same thing you are.”

To read full transcripts of all of the panels and Master Classes at DOC NYC, visit the special topic on The D-Word. To access the entire discussion you must be a “professional” D-Word member. If you feel you qualify for professional status, you can register here (it’s free).

Erica Ginsberg is the Executive Director of Docs In Progress, a Washington D.C.-area nonprofit which provides programs, services and community for emerging documentary filmmakers. She is also Co-Host of The D-Word, a free online forum for more than 15,000 documentary filmmakers worldwide. She is co-producing Creative Feds, a documentary project which puts a face on the “faceless bureaucrats” of the U.S. federal government by focusing on the creative pursuits these civil servants seek out in their free time, and how they bring this creativity back to their jobs. Erica can be followed on Twitter @docsinprogress