“There is Really No Such Thing as Objectivity in Film or in Life”: Dan Rybicky and Aaron Wickenden on Almost There 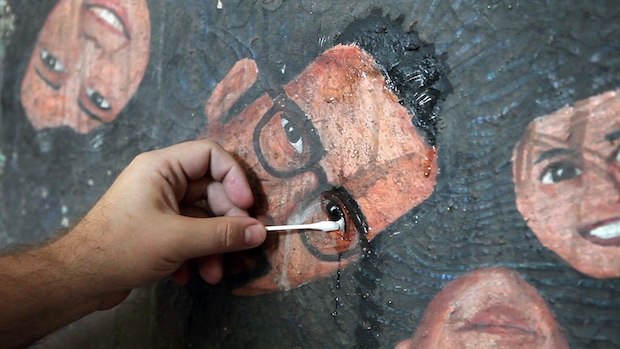 “There was an aura of blunt truthfulness permeating his artwork, a sense of authenticity that really did pull us in” —  Dan Rybicky and Aaron Wickenden on Almost There.

If you met a mildly deranged looking outsider artist painting portraits at a pierogi festival in Indiana what would you do? Personally I would smile, possibly get my portrait made and then definitely go eat a pierogi. When filmmakers Dan Rybicky and Aaron Wickenden were presented with this scenario this is not what happened. Instead, they befriended the artist, their unlikely relationship slowly evolving into a layered folktale about creative expression and trust, documented through their film Almost There.

The artist Peter Anton lives in a rotting house strewn with cats. His paintings decay in corners, his detailed autobiography piled high next to an impressive collection of VHS tapes and filth. The film closely navigates Anton’s world with a buoyant and organic hand but, with masterful and caring craft, Wickenden and Rybicky don’t just tell his story. The filmmakers use him as a lens to view humanity, quietly wading through sweeping social issues — poverty, mental illness, responsibility, aging, American infrastructure and more — to bring into focus the unstable lives that so many lead in this country.

Anton’s art and Almost There are both expressions of how one sees the world and their place in it, of the ways in which we construct media to shape personal narratives in order to become who we want to see, the truths quite often hidden behind a presented facade. It is a documentary that leads with a complex compassion and that tests the very nature of one’s character, character that is increasingly mediated, and exposed, through the lenses of others.

Almost There will be distributed via Factory 25 and Kartemquin films beginning with premieres at Cinema Village (NYC) December 4th and December 11th at Arena Cinema (L.A.) and The Gene Siskel Film Center (Chicago). A country-wide release featuring appearances by the filmmakers and special guests will follow as will digital platform releases kicking off with Fandor’s subscription service December 5th.

Filmmaker: Documentaries about artists are almost always visually difficult for me. The filmmaker’s style butting up against the subject’s, one is often subsumed or compromised. Your film balances the two so well. How did you stylistically approach a figure who has a such a well-defined aesthetic?

Rybicky & Wickenden: What initially drew us to Peter was our mutual love of art. Because our project was motivated from the beginning by our desire to help Peter share the compelling narrative he’d created about his life via his art, we always knew the final film would be rooted in and informed by his voice and vision, which can best be seen and felt in his paintings, writings, photographs, scrapbooks, hand-drawn VHS covers and other ephemera.

With Peter as our central character and primary collaborator, it was important that others on our creative team meet him to get a sense of his vision and aesthetic firsthand before beginning their work on the film. When our Motion Graphics Designer Ross Thomas visited Peter, he showed Ross all of his art, including his handmade lettering, which Ross then incorporated into his animations for the film – especially for the opening sequence narrated by Peter, and in a later sequence as well, where Peter reads the first few lines of his autobiography, which by the way, is also titled Almost There.

Finally, our project originated as a photo documentary, and long before putting together this film, we curated an exhibition of Peter’s work — his first solo show — in Chicago at Intuit: The Center for Intuitive and Outsider Art. Because of our background as documentary filmmakers, our goal as curators was to not only share and celebrate Peter’s art, but also to provide it context by surrounding each of his paintings with the photos we’d taken highlighting Peter’s process and the environment in which he created his work. As artists ourselves, we were interested is seeing how Peter’s textured and unedited presentation of himself and his story played in concert with, as well as in contrast to, our more technically savvy but equally obsessive photographic approach.

Filmmaker: You take on a deeply personal investment with Anton, one that even some of your peripheral subjects express concern about! At what point did you realize objectivity wasn’t an option? Why did you decide to trust Anton?

Rybicky & Wickenden: Our film takes place over eight years, so our personal investment — which we try to document in the film through time — evolved slowly. And even though we always knew there really is no such thing as objectivity in film or in life, we trusted Anton because he wrote about very difficult subjects, including his tragic circumstances, with unusual frankness. There was an aura of blunt truthfulness permeating his artwork, a sense of authenticity that really did pull us in. And early on, we did ask Anton several questions about his experiences directing children in his Talent Clubs and teaching them art classes for free in his basement. But he evaded those questions and we didn’t press him, mostly because he’d shared dozens and dozens of newspaper clippings with us about his work in the community — but, as we learn later about halfway through the film, he didn’t share all of the clippings about him. And what he didn’t share becomes the turning point of our entire story.

Filmmaker: Often in the outsider/art brut world people find the disadvantages of an artist to be a marketable quality, a way to help promote their narrative or generate profit. How did you navigate the potential for exploitation — both by yourselves & possibly by others?

Rybicky & Wickenden: On the most basic level it probably helped that we’re not trying to market Peter’s artwork and generate a profit from it. We’re not his art dealers and have consciously avoided getting involved in that aspect of Peter’s work life. For example, numerous times he asked us to try and sell his art on eBay for him. We would always refuse. That said, we did give Peter an old but fully functional computer, and there are employees at his senior home who could help him with eBay. We’re also not really collectors of his work and thus don’t have a financial motivation in selling Peter to increase the value of our holdings. In fact, early in the project Aaron purchased a large painting from Peter for about $250 but gave it back to Peter at the completion of the filming because it mattered more to Peter to have that autobiographical painting back with him then it did to Aaron to hold onto it. With those sorts of financial entanglements out of the way, we were able to approach the subject matter as we would with any documentary film and focus on making the most compelling narrative possible.

Filmmaker: How did you approach editing? Almost a decade worth of footage, Anton’s own vast personal archive, the many moving parts and people of this constantly expanding story — how did you even begin to give this piece shape?

Rybicky & Wickenden: It certainly took awhile to find the shape and balance of the film. While we are first time directors, we both had some experience shaping narratives and that helped quite a bit. Dan’s background is in playwriting and screenwriting, having received his MFA from NYU’s Dramatic Writing Program. Aaron’s background is in editing and he has devoted to honing this craft for the last 15 years. In fact, as we were starting our edit, Aaron had just completed editing on the Oscar-nominated feature doc Finding Vivian Maier.

Also helpful was having to describe the narrative arc of our film in the many grant applications we had to write to obtain funding for our project. We applied to ITVS three times before receiving funding from them, and this writing process gave us a pretty well-developed road map for when we started editing. We knew going into the edit what story we were hoping to tell and just hoped we had the footage to pull it off. We were also very lucky to have an incredible support team for the edit. We were working under the guidance of our Executive Producers Justine Nagan and Gordon Quinn at Kartemquin Films, and we also hired the talented filmmaker Kyle Henry as an editorial consultant. With our team in place, we set up several feedback screenings over the course of a year where we showed different iterations of our work-in-progress to fellow filmmakers and strangers. It was a humbling experience, and at first, the film wasn’t working at all. The audience was confused and didn’t know why they would want to spend 90 minutes with our main character, who they found abrasive. We quickly realized we would need to include our own storyline as filmmakers in order to show the audience why we were interested in the character, and that would hopefully give people a reason to stick around and see how our relationship played out.

Filmmaker: Anton is wildly preoccupied by his own legacy. What has been his reaction to the film?

Rybicky & Wickenden: Anton was the first person we shared our film with when we were just about a week away from picture lock – a common practice among many of our peers at Kartemquin which allows a main subject the opportunity to address any potential concerns before the film cannot be changed in post.

Throughout the process, Peter consistently told us he did not want there to be anything in the film about the troubling incident from his past that, when discovered by a journalist in the present after his exhibition opens in Chicago and immediately, threatens to shut the show down. We responded by consistently telling Peter we would not leave that part of the story out, that we would include it in a way that we hoped he felt was respectful of him and his point of view. There are two sides to every story, we assured him, and Peter would grumble until we changed the subject. Because of how much upset he expressed at knowing this part of his story would be in the film, we were more nervous than ever about showing it to him.

You can imagine how delighted and relieved we were to see and hear Peter laughing and crying throughout the entire screening. The credits rolled, he turned to us with tears of joy in his eyes and said, “That was my life. You did it. Don’t change a thing – even if tell you to.” And a few weeks later, Peter did tell us to change something, but of course we didn’t. And now that he’s seen the film twice more – both times with adoring audiences – he’s happy we left things just as wanted them to be.