Early Adopters or Canaries In a Coal Mine? Niall McKay at the Screen Forward Labs 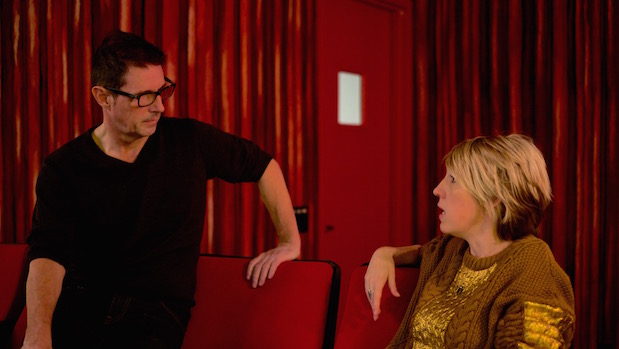 Niall McKay and Amy Dotson at the Screen Forward Labs

At the opening party for the Irish Broadway musical, Once, as my wife Marissa and I sucked down free drinks and hors d’oeuvres in a swanky Manhattan penthouse, we got the idea for creating a series about people in New York who go to events and screenings for the free food and drink. We called it On The Lig, an Irish/English expression for being “on the mooch.”

Enter IFP Screen Forward Lab, a type of treatment center for befuddled short-form filmmakers. Our mentors aim to teach us how to monetize our content until it can monetize itself.

There was a time when all you needed was an idea. Then you needed an idea and a script. Then an idea, a script and a pilot. Now you need an idea, a script, a pilot and an audience. Despite the Internet’s democratization of media, the bar to entering “The Business” has never been higher.

But we were in good hands at the Screen Forward Lab. Our tutors included pioneers of the web-series and short form space such as Ingrid Jungermann, creator of Park Slope, Michael Gottwald, producer of High Maintenance, Saschka Unseld, director of The Blue Umbrella and founder of Oculus Story Studio and communications strategist Jennifer McArthur. Indeed, Web-series sounds too low-fi so we settled on the the title of “short-form serialized content.”

The Screen Forward Lab gave us the opportunity to listen to and meet the denizens of digital media space. Folks like Vimeo’s Jeremy Boxer, YouTube’s Steve Beckman, Tribeca Film Festival’s Liza Domnitz, and Conde Nast Entertainment’s Robert Profusek. These guys chatted about topics such as funding, audience development, marketing, distribution, branded content, and of course, that old chestnut, how to make or not make money from your content.

While money and fame would be great, most of us would be happy to find our audience and cover the cost of production. As things stand we’re paying a heavy price for our habit.

Crowdfunding is a wonderful way to raise cash but only if you have a crowd. According to Indiegogo’s Kristen Konvitz and John Trigonis, these tools have become the Phase One in audience development. The projects that manage to raise a great deal of money from outside their direct network (in the media space) are still the exception rather than the rule. So much so, that the same titles came up again and again over the course of the week.

Few series that began life on the open Internet have migrated to a paid content model and ended up with with a TV deal. High Maintenance [gulp] started on Vimeo and Broad City, which went from YouTube to Comedy Central, are two of the success stories so far. So too is Video Game High School, which has gained a huge following on YouTube and Vimeo.

Perhaps one of the most useful aspects of Screen Forward Lab was the demystification of these series and their creators and a cold hard look at who exactly is managing to finance the cost of production. Creating short-form serialized content is still about building a career rather than creating a body of work that can be directly monetized by the viewers, by advertisers or by the media companies — at least, for the time being.

According to a number of speakers at Screen Forward Lab, this is about to change. Advertisers are struggling to find their markets as viewers flee TV and cable and migrate to niche segments online. We are in the right place at the right time. The question is are we the early adopters or the canaries in the coal mine?

Niall McKay is an Irish writer, director and film curator based in Brooklyn.