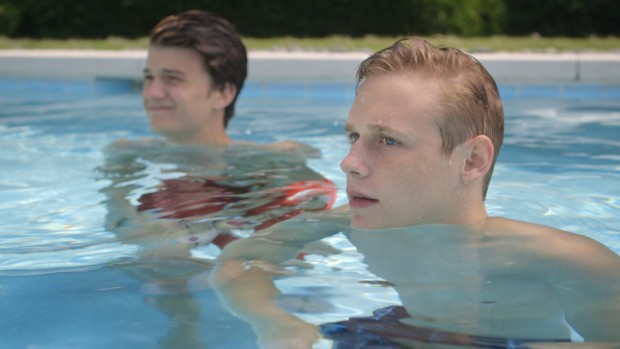 by Howard Feinstein
in Filmmaking
on Jan 7, 2016

The below review of Stephen Cone’s Henry Gamble’s Birthday Party was originally posted on June 16 as part of a review of BAMcinemafest. It is being reposted to coincide with the film’s opening as part of the IFP Screen Forward series.

Like many youths his age, he is plagued by his emerging sexuality, which is man-for-man but fairly well masked. Unlike many youths his age, he is a devout, unquestioning Christian, a believer molded by his father, his adopted beliefs reinforced by a constant regimen of prayer, Christian camp, and a crowd of friends from the church. (His older sister, Autumn, played by Nina Ganet, attends a Christian college that refutes evolution.) The fear and anxiety behind the hopelessness of separating his physical and spiritual selves are graters peeling painfully at his sense of self and his sense of worth.

A single shot mid-film of four teens in bathing suits succinctly sums up its principal concerns and plotlines. Logan (Daniel Kyri), the one friend from the church who we know from the time of his arrival is an outsider (he’s black, and glances among others in the pool tell us he is not one of them), a token (Christian folk are benevolent), and a gay man (he’s passive, effeminate, and wrote the script for a production of Guys and Dolls). He stands watching his crush, Henry, who is in turn looking at his best friend and unrequited straight lover, Gabe (Joe Keery). Gabe’s eyes are firmly set on the most attractive babe’s bikini bottom, onto which a pinned silver cross dangles over her pubis.

These kids may exhibit the trappings of religion, even of the fundamental variety, but they are really like other teens. Henry, for example, can’t get into the hymns his father plays on the outdoor speakers and, using his warm connection to his more permissible mom, convinces him to play electronic music. Gabe is having little luck with the young woman, who has her sights set on Henry. She follows him upstairs to his bedroom and initiates a make-out session. They are living, breathing humans above all, although it appears that he is just playing along. When she asks if he would like to become more involved, Henry delivers, in his gentlemanly manner, the film’s funniest line: “Can I get back to you?” Christian and comic are not mutually exclusive.

Director Cone does not harp on just one or two types of troubling inconsistencies; his intelligent script is more all-encompassing than that. Guest Ricky (Patrick Andrews) has some past mental-health issues that could deem him ineligible to once again counsel at the coming Christian summer camp. Pastor Bob’s rebuff leads to a tragic replay of the past that puts a damper on a party that appears to be happy. But the ambience of contentment and love proves to be a fraud except for a few of the more mindless followers, or maybe just those who loudly chant their 100% acceptance of everything they have been taught in what can be a dangerously hermetic Christian milieu.

In a loving conversation inside a car parked out front, Kat confides in Autumn (who has just had a devastating quarrel with her b/f) that she had had an affair with Ricky’s late father (and Pastor Bob’s mentor) because of the sensuality he provided her and the way he gazed at her — things missing in her own marital relationship. No one is innocent: Bob and close middle-aged pal Larry (Francis Guinan) are not above sneaking glasses of wine in the utility room.

Larry, a crotchety but decent cynic, is the moral compass of the movie, espousing the values of acceptance and difference, and decrying hypocrisy even while swerving side-to-side from the illicit alcohol. In some truly poignant scenes, the feeling of sacredness tinges the most mundane of actions. A spiritual chorale on the soundtrack accompanies the slow movement of the smiling young people as they move along the arranged tables to dress their barbecued hot dogs.

I’m not sure if Cone is down on pure carnality, conflicted, or together in the way he charts Henry’s progress integrating his homosexuality with his essence. Over the course of the film, he goes from asking one heterosexual dude, “How big is yours?,” followed by a two-man circle jerk, to sheepishly inquiring of a more-than-willing partner, “Do you wanna kiss?” Whatever the answer, this filmmaker has balls.