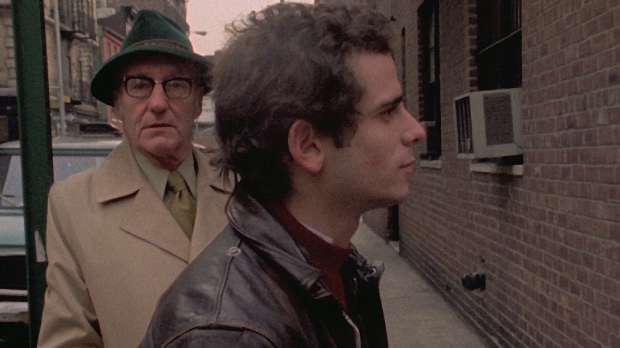 One of the earliest challenges in making Uncle Howard was figuring out how to tell a story around a main character who is essentially absent. My uncle, Howard Brookner, was a fairly obscure director, whose work went missing to varying degrees, and who had died some 25 years ago. Yet, to me and others around him, he left a very strong memory and spirit. How to show this?

For inspiration, my producer, Paula Vaccaro, and I turned to Howard’s friend and former film subject, William S. Burroughs (Burroughs: The Movie, 1983), whose book, The Western Lands, was the last he wrote before dedicating himself to painting. Burroughs’s book explores the Egyptian Book of the Dead and the different spirits one has: there is an entombed spirit, which is one’s mummy, and there is a floating spirit. Egyptians mummified with the hopes of adjoining the two spirits and achieving immortality.

We applied this concept to Howard. His mummified spirit is represented in the cans of film he left behind, mostly in Burroughs’s bunker, which is essentially a tomb or a holy place in the Bowery district of New York City where Howard stored the largest portion of his archive. His spirit that’s floating up in the air is like the memory that he left in the minds of his loved ones and friends. The idea was to unify these two facets of Howard’s spirit and, by the end, have a film where Howard has managed to live on forever in a movie.

We worked this approach into the production as well. We decided to shoot Howard’s friends in locations that were significant to Howard’s story, like Brad Gooch at the Chelsea Hotel or Jim Jarmusch in Burroughs’s bunker. We also filmed the process of recovering Howard’s work. This way, as an audience, we are always kind of with Howard — even though he is not physically present.

Before shooting each scene we’d listen to music (I had a large playlist of songs I wanted to use for the film) and talk through this intention and let it guide us. When you’re shooting a documentary, there are so many possibilities of what to shoot and how to shoot that it can be a bit overwhelming. We never wanted to land on a default position; each scene we’d shoot had to have clear intent. Of course, things change as the scene plays out and one needs to adjust on the fly, but to have our Burroughs-ian Egyptologist structural plan at the onset always put us in a good position to try to bring Howard back.

The same structural necessity applied to post-production. There was so much to pack into the film, and without a tight structure, everything seemed thin and underdeveloped. It was a challenge because Howard’s story, all the way up to his untimely death, is so dramatic and compelling on its own, and yet there was so much more to it: the AIDS crisis, the gentrification of New York City, Reaganism, recovering and preserving his lost work, his lasting influence on so many, including myself. Fortunately, we were able to land Masahiro Hirakubo, who is a master at structure and a brilliant film editor and cinephile. For weeks we talked through ideas and themes and filled up notebooks. Then we looked at Akira Kurosawa’s Ikiru, which seemed to provide us with a structure that could house everything we wanted the film to be about.

In Ikiru, almost from the very start, you learn that the main character has a terminal cancer of the stomach. He is a bureaucrat for the city, and although the townspeople have been petitioning to put in a playground for the children, he cannot be bothered with that, or with anything for that matter. With an imminently finite amount of time to live, he realizes his life has amounted to nothing, so he starts to try out different ways of life. Then, midway through he has an epiphany and Kurosawa cuts to his wake. It’s very radical, and gradually you find out what happened with the rest of his life by how he is remembered, and at the end we learn that he spent the end of his life building the children’s playground – making something for a new generation, giving something back. It works so well because only after you’ve digested death can you reflect on legacy. There needs to be space in between and this structure allows for that.

We used this structure as a starting off point as we discovered our own for Uncle Howard, and it really helped. Knowing that Howard is gone at the beginning of the film gives the film a particular focus. Then, we plunge into his story with the discovery of his work, telling of his life and career, and then we start moving along at top speed when WHAM! we just cut it. And then we circle back to discover how he is remembered and to with what he left us. Within this structure we found a way to overcome the biggest editorial challenge, which was how to let audiences fall in love with Howard on their own in just 90 minutes. One of the best comments we’ve received is how far audiences travel in a such a short period of time, which is true to Howard’s own life.

Aside from the profound influences of The Western Lands and Ikiru, we were very lucky to have so many great filmmakers involved in this project, including Jim Jarmusch (executive producer), Sara Driver (co-producer) and Tom DiCillo, all of whom appear in the film, both in archival footage and in the present day. Not only are they are some of the smartest filmmakers out there, they were also a part of Howard’s story, which made it all the more special. Their input along the way was absolutely invaluable. Additionally, Paula was instrumental in showing early cuts to trusted friends and colleagues from different backgrounds == feedback that proved to be essential in the editing process.