“Sorry” isn’t a Solution: On Mistakes and Film Sets 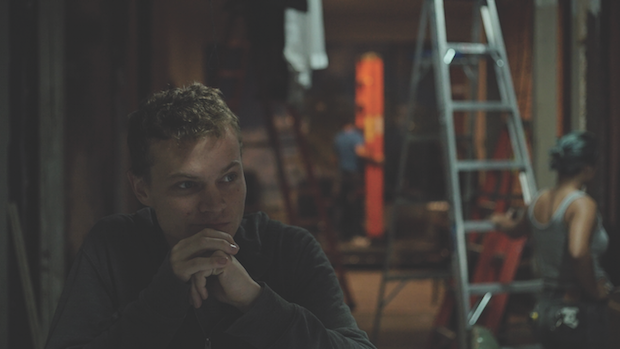 Taking a moment (probably to stand-in) during one of our many LED make-overs (Photo by Andrea Longacre-White, courtesy of Annapurna Pictures)

by Sean Porter
in Cinematography, Columns, Filmmaking, Issues
on Jan 20, 2016

Mistakes don’t really have a place on a film set. Sets are engineered for performance under pressure, engaging dozens and dozens of professionals, from producers to PAs, to do their best work in order to get the shot, make the day and finish the film on time — all while maintaining a good attitude and supporting the creative process. A good set is a well-oiled machine, with a cinematographer at, or near, the center. As a DP, you are interacting with just about every on-set department. Your job is to make everyone look good, and not just with your lighting! Mistakes cost time or money, and neither of those things is up for grabs.

My last film was very ambitious, with a capable, precise and fast-moving director steering the ship. The role for everyone on set was to essentially just keep up, while keeping the bar pressed firmly against the ceiling — with minimal crew, of course. My gaffer, key grip and I spent a good amount of time designing an all-encompassing, fully dimmable, color-switchable, 360-degree, house-power-friendly lighting plot that could handle both day and night for over 15 zones within a turn-of-the-century mansion in L.A.’s West Adams neighborhood. We had two days to rig it. The risks were high: I had never attempted to light a film this way. I left all my usual tricks at the door, and we headed into the unknown. The whole thing could have been a mistake; thankfully, it was not. We moved fast and got good stuff, rarely bringing in more than a pile of bleached muslin to throw on the floor.

I think that’s why the few mistakes we made stuck with me like they did. The first was the “teaser.” My key and her team had outfitted all our overhead LEDs with beautiful night-gray teasers. It was my first experience with this material, and it was love at first sight! At the last minute, my gaffer and I decided to add another overhead fixture in a large stairwell, some 15 feet above the landing. The fixture made it in time, but I didn’t have the grips skirt it. In my mind it was really for daytime ambience, and it was better to let its light spill out. Well, on day three we ended up on the stairwell shooting day-for-night. The LED had to play, but its light went everywhere. I knew it was going to be a bit of a bear to get to the unit, but my grips were eager to get it done. The plan seemed reasonable, and we had a wardrobe-change working for us, but then all of a sudden it wasn’t reasonable anymore. Walls wouldn’t hold nail-on plates, speed rail started coming in, blood pressure rose. The director was losing time and wasn’t happy, and I was only half-teased. I’ve been here before — I knew if I just gave my team the extra few minutes they’d get it done, and we’d feel like we made a good decision. But time was slipping away from me, and it was getting hard to make eye contact with anyone. The director asked, “What are you going to do?” “I know, I know … I’m sorry,” I said. “Sorry isn’t a solution.” He was right; I had to make a tough call. I pulled everyone off the ladders, and we took the shot. My crew felt like crap. I felt like crap. But we got the shot, and we moved on. Was it my favorite shot? No. Was it workable? Yes. And the director got back 15 minutes that he needed more than I did.

The next was a dolly shot at magic hour — or more precisely, tragic hour. We had a kick-butt dolly grip; at times on this film, I felt like I could look the other way for a minute and look back and see 40 feet of track leveled and the dolly coming around the corner. Well, this wasn’t one of those times. And, the thing is, you have to look away at some point! We had gained some time in the day and had an opportunity to pick up a tracking shot in front of a beautiful, 500-year-old fig tree. We got out there with the sun a finger or two above the horizon, and the AD and director looked at me for a decision. I gave my dolly grip a look and said, “I think we should go for it!” The director said, “Okay, can we add another 10 feet of track?” The race was on.

Of course, once you are past the fall, equinox light is really not on your side. And again, the watched kettle doesn’t boil. My crew was hustling, but the conditions were tough. I took reference shots as we waited and tried to keep my hopes up, but then there’s that slippery turn, and that knot in your stomach comes out of nowhere (the same one from the stairwell). I checked my meter again; it said, “Yeah, right.” I quickly had my electricians bring in a big bounce source to salvage the ambience. The director asked, “What’s that for?” “Help!” I said. By the time we got the shot off we were barely holding detail in the sky, and not much of the tree save for a few leaves in silhouette. It was basically an abort-ship. Knowing when to pull the plug is tough and almost always a moving target. Even though we were ahead, it wasn’t worth the risk of failure knowing we could have moved on to a surer bet.

And, boy, oh boy, the perils of on-set monitors! I was lucky enough to come up through film: trust your meter, trust your eye, trust your lab. On most digital movies I still work this way: I use my meter to rough things in and get ratios where I want them, and I typically see what I’m expecting when the monitors come up. I’ve also almost always operated myself, so I’ve come to figure out how the ALEXA’s EVF is interpreting the scene. Most of the time, it’s a good reference point. On this film I wasn’t operating but in general, when indoors, our system was working.

On our first daytime exterior, I started off with my meter and brought in some large bounces for a scene under a large oak tree to compete with the f/90 sun in the background. It looked reasonable to my eye, and they were still a good stop/stop-and-a-half under key, so I felt like the shot would read as shady without being a bunch of silhouettes. The problem was, my monitoring situation was useless outside — I was fighting glare and futzing with brightness and contrast to get a usable image. But the real mistake was not taking that extra minute to hunt down the DIT or push the operator off and double-check how the ALEXA was really seeing things. When the dailies came back, they weren’t great. The director argued my use of the bounces: “I think it’s better to start with an organic base and help it later than start with an artificial base and try to make it look natural.” Ugh! I know! That’s my whole thing! I felt betrayed by my tools and my judgment. Subsequently, we had a four-sided ultrabounce flop follow me wherever we went with a “no-touch” calibrated monitor and we didn’t have that problem again. I can’t say I like the idea of the DP somewhere off set stuck in the DIT tent, so this was our compromise, and it worked out great.

Clearly, these mistakes aren’t your cheeky “memorable blunders” or clever anecdotes from years past. They are fresh and unpasteurized. While they may not be earth-shattering, they are certainly heavy enough when you are in the throes of production. DPs — and everyone else — deal with dozens of challenging (even downright crazy!) situations every day on set, and sometimes you win, and sometimes you don’t. We’re not machines. And at the risk of sounding like a bad self-help guide: It’s not what happens to you but how you deal with it.