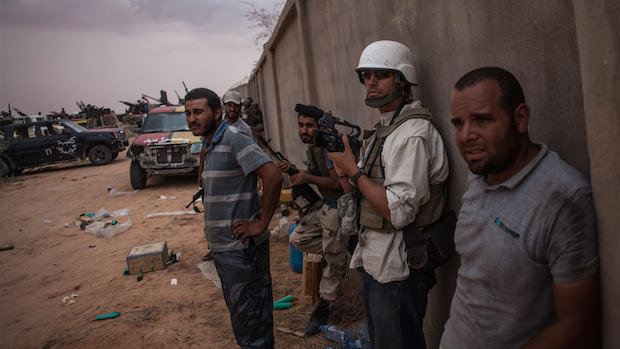 A New York-based cinematographer and camera operator, Clair Popkin has worked on such shows as Louie, 30 for 30, and Park Bench with Steve Buscemi. In 2015, he served as cinematographer for the HBO film Living with Lincoln, which was co-directed by Brian Oakes, the director of Jim: The James Foley Story. Below, Popkin discusses his unobtrusive visual approach to depicting the life of James Foley, a reporter who was held hostage and ultimately died in Syria in 2014.

Popkin: The director Brian Oakes and I had worked together before. I shot his last project, which was in HBO’s documentary lineup last season. That collaboration had worked very well, we see eye to eye stylistically. This was a very personal project for him so I think it was helpful for him that we had a great working rapport already and he trusted my sensibilities.

Popkin: I wanted the film to feel natural and not have the style be heavy handed or take away from the story being told.

I strove to make the light look as natural as possible on the interviews and b-roll with Jim’s family and friends. The director and I wanted to find people in their spaces; people’s personal spaces, their homes, say a lot about them. We wanted to shoot a little wider than is traditionally done in interviews so we could get a sense of the space and the person who inhabits it. This natural wide look juxtaposed nicely with the other look we established, which was a darker, more dramatic interview setup. In the darker setup there is a touch of light in the background, as if coming from a closed window or under a door to the outside, but it’s not quite distinguishable, the outside world is not visible. This juxtaposed nicely with the interviews corresponding to the earlier parts of the story, all of which are framed much wider with windows and views of the outside world.

For the recreation part of the shoot we looked at some paintings and older photography where things don’t fully resolve. We wanted it to feel dark and surreal and not as if we were trying to show reality. To accomplish this I lit the scenes very darkly, I also shot wide open on vintage lenses that were soft and we captured the footage at different over-cranked frame rates.

Popkin: For the recreations which we shot I looked at some impressionist paintings, particularly how the light works in the softer less focused frames. We also looked at older black and white photography. The world we tried to capture in this part of the film is fairly monochromatic itself, so looking at the light in black and whites was helpful for inspiration.

For the interview portion of the film the director and I sent back and forth a bunch of stills we liked before we started shooting. We actually looked at a bunch of frame grabs from No Country for Old Men and really liked the wide lensing and lower camera angles.

Popkin: This film involved a lot of travel and we rarely had the chance to scout locations more than a day in advance. I had to put together a very compact kit that I could use to light and shoot in a variety of locations without scouting ahead of time.

Popkin: The first shoots we did were on the ARRI Amira with Cooke S4 lenses, but it just wasn’t sustainable to rent a camera for all the shooting we needed to do. We ended up buying the Sony FS7 so we could have a full camera package ready all the time. We wanted a camera that could capture 4k as well as shoot LOG. The FS7 was compact and has great battery life so it seemed like a good fit, also I was able to use a variety of lens options on it with the different adaptors available. We shot the majority of the film on the FS7.

For lenses we used Canon CINE primes for the interviews. I love the round Bokeh those lenses have and with the fast aperture I was able to make the backgrounds fairly soft despite being on wider lenses.

For the recreations in the film I shot on Zeiss Superspeeds and a Canon 25-250 zoom lens.

Popkin: For the interviews we wanted the light to feel very natural and soft, almost unlit. We also wanted to see windows in the frame so I lit to balance to the ambient outside while still keeping it soft and flattering on the subject. I took some Litegear hybrid LED strips and put together some compact lightweight units, sized to fit perfectly into a pelican, with a variety of diffusions to put on them and some foldable flags. I also tried to carry a small HMI in case the windows in the frame were to bright, or in other situations to push through a window in the background and create some more depth and contrast in the frame.

We wanted the recreations to be very dark and not feel like classic “recreations.” At times my light meter was barely registering anything. In that set there was only one window which is the only logical place for light to come from so I lit mainly from one side and used a ton of flags to control the light and create a lot of gradations of light from the same source. We tried to keep the scenes backlit as well so that a lot of details in the actors wouldn’t be super visible. This way the viewer can interpret the scene more themselves.

Popkin: The recreations that we shot on a set were the most difficult part of this shoot, it was all in a small set with one window and one door- The space itself forced a lot of problem solving and creativity from my whole team, my gaffer and key grip were great at coming up with solutions on the fly so that we could capture the massive amounts of shots we had to do each day.

Popkin: We tried to shoot as close to our final look as possible without losing information. That being said, our colorist Stewart Griffin did a terrific job smoothing out the look and suggesting subtle tweaks to really enhance that we had captured on set. We did our grade in P3 color space while watching a 2k projection, we spent quite a bit of time on the color.