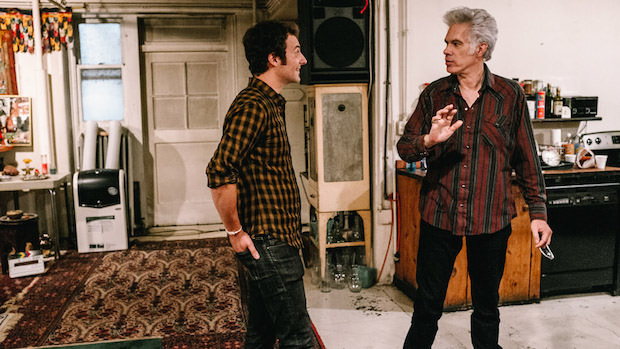 Gregg de Domenico has more than 10 years of industry experience as a cinematographer, camera operator and second AC. At Sundance 2016, de Domenico served as co-cinematographer for Uncle Howard, a documentary on filmmaker Howard Brookner and the search for his archival remains of his debut documentary, Burroughs. de Domenico lensed the film with first-time DP André Döbert. In this interview, de Domenico and Döbert discuss the film’s blend of archival and new footage along with other visual challenges.

de Domenico: Aaron and I got hooked up through one of our sound people, Pablo Diez. Pablo and I worked together for the last four years on a feature documentary about painter Joe Coleman. Pablo was always a fan of my approach and style of filmmaking; he thought Aaron and I would gel and work well together. We have similar tastes in film, art, music, etc., all of which made our communication that much more enjoyable and productive.

Döbert: It was a typical case of meeting the right person at the right time. I met Aaron Brookner purely by chance. Aaron was renting a camera from a friend of mine. That friend couldn’t hand over the camera so I did instead. I reckon Aaron and I just connected somehow. We became friends and found out that we both have a similar understanding of the world.

I am not sure what led to me being hired as a DP for Uncle Howard but I reckon above all skills and expertise I may or may not have was the mutual understanding Aaron and I had developed for each other as friends. When you get to know somebody as a friend it is much easier for you to capture images true to their vision. So then when you are out shooting, you just know what to do and where to point the camera. For us it never was a case of “should we do it like this, or like that;” we just went “let’s do this, let’s do that.” Of course that doesn’t always work out but it is a very non-technical approach, which really frees you up to be open for any golden moments that might unfold in front of the camera.

de Domenico: I came on to the project already in production so much of the ideas were in play. Aaron was using his uncle’s films as the base reference for the visual approach. He wanted new footage, as seamlessly as possible, to blend well with the 16mm film footage of Howard’s films, as well as the home movie footage of the Brookner family. The modern day footage is just one facet of this multilayered film that spans 30+ years so you know there will be a multitude of film and video formats. With the DI, you hope to have them all play nice with each other. I love archival footage, especially from that era of the late 1970s/early 80s NYC. Knowing how much that stuff would enrich the storytelling, it was important to make our shooting a visual extension of that.

I would say that the camera work was motivated by being “in the moment” with our subjects; the goal being to be acutely in tune with what was happening in front of the camera and interpreting that moment as honestly and poetically as possible. The freedom to find the right place for the camera comes from having the trust of your subjects, who let you in as much physically as emotionally to their lives. That trust is such a vital part of the process and can never be underplayed.

Döbert: I believe form should follow function, and aesthetics should not overshadow drama. Life, as it is, is pretty amazing as long as you give it room to live. The only artistic style I have is to emerge in the moment and point the camera at what I am most drawn to. This may sound obvious and simple but I believe this is the most valuable thing I have to offer. This way I am not too worried about what it says on paper, what the story is or who the most important person in a shoot is. To me most important is what’s happening when I am looking through the viewfinder.

de Domenico: Honestly, music was important to us. I always like to work from a place of inspiration so Aaron gave me music to soak in, for getting in the right mental space. SQURL, Jim Jarmusch’s band, was definitely a big influence.

Döbert: I am influenced by everything I see or hear, the A-Team, Magnum, The Deer Hunter, 8 1/2, The Holy Mountain, Angela Merkel, Werner Herzog, North Korea as well as daily news, random conversations I hear on public transportation and occasionally by my own thoughts trying to make sense of it all.

Döbert: I know the production of this film was challenging and of course there have been certain budget constraints but I personally don’t think that any additional money would have significantly improved my cinematography.

de Domenico: Any lower budget doc that requires lots of travel with a small crew over a long period of time makes you dig deep to fight for it. But that’s part of the fun. The challenge of working fast and efficiently in service of incredible subject matter certainly keeps you motivated and intrigued. I always remind myself that I get to do what I love and all of those other concerns fade away.

de Domenico: The shoots I worked on used the Canon XF305. The two main reasons were first, being able to shoot 1080/50 mbps/4:2:2 (certified for broadcast use) at a reasonable price point and second, to have a lightweight, all-in-one camera with a fast zoom lens. The 4.1-73.8mm lens has a 35mm equivalent of 29.3-527mm, giving us plenty for any scenario without having to change lenses.

Döbert: We shot on a Canon XF305 with fixed 18xHD L-Series Lens. The main reason for me to choose this camera was the feel of the image. If you dial down all the image correction, the contrast and the sharpness, the image that little camera puts out is very reminiscent of a good old high-quality 16mm footage. That combined with the amenities of image stabilization, autofocus and a solid 50mbps 422 Mpeg codec had me convinced.

de Domenico: I try to use what I have, based on budget and time, to complement the existing environment. It’s about trying to take whatever elements are available and, in the time allotted, have them work harmoniously with each other to service the story. Sometimes, a scene can be about “run and gun” and other times be about elegance and precision. Our interview with Robert Wilson always felt like it deserved an ornate balance and sophistication. It’s the kind of personality he is, so the shot demanded it.

Döbert: Make sure whatever tells the story best can be clearly seen. With documentaries most of the time you don’t really have the luxury of putting up a bunch of lights, scrim and flag them, fine-tune and readjust. So all you really can do is to be aware of your environment and think ahead. You are shooting outside at night, bring a light. You are shooting in a dimly light apartment, better get your subject toward a window. Yet again, form follows function.

Döbert: I can’t tell but you can watch the film and I am sure you will spot it straight away.

de Domenico: No scene was particularly difficult but the logistics and setup of every location always kept you on your toes. We did a week of shooting in Kansas where the temperature was literally -15F without wind chill! Polar vortex + shooting = ugh.

Döbert: I would describe the finishing of the film as subtle, which is a look I very much endorse. However, that is a combined achievement of everyone involved. I think it suits the story very well and it was clear from the beginning that this was not going to be your drone shot-heavy, fast-pace edit, action documentary. I have never asked myself how much of my look is baked into anything. I believe Aaron planted a seed at the very beginning of his journey and at times I had the privilege to take care of the resulting plant, as did many other people. So in the end it is the same plant we all just helped making it stronger.

de Domenico: We tried to shoot everything as flat as possible to give the colorist the room to play with it. There’s that soft, 16mm feel to the Canon XF305 footage that we embraced and accentuated in the DI. I believe it works well with everything else.