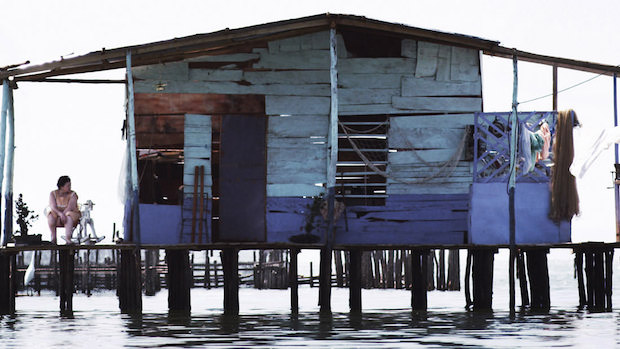 Between Sea and Land

Robespierre Rodriguez served as the cinematographer on Between Sea and Land, a World Cinema Dramatic Competition selection at the 2016 Sundance Film Festival. In his interview with Filmmaker, Rodriguez outlines a calamitous shoot in Colombia filled with canoe rides, sudden rain and ever-dwindling sunlight. He also discusses his impromptu role as the film’s DP and his methods to “capture all of the actor’s feelings” through his images.

Rodriguez: I was a producer for the film and started talking to Manolo about the cinematography and post-production on color, and he thought it was interesting. Additionally, the person who was originally going to be DP ended up having to work on a Netflix series, and told Manolo he couldn’t work on the movie, which is when we decided I would take over the position.

Rodriguez: I was a photography professor in several universities in Bogotá, I also own a rental company for audio-visual equipment and made our own work. I showed Manolo my work and I tried to understand the poetics of his film. I think that’s what it was —well, I hope!

Rodriguez: My goal was to make the movie look natural so we could take advantage of all our resources we had on location. We worked to make the light look subtle and not look artificial, all by subtracting the amount of light while adding more natural light. We did this so the light sources would be less noticeable, in order to follow the narrative’s aesthetic, except during the few “American night” scenes.

Rodriguez: I always saw this as a warm movie, where we could potentiate the feelings the characters were transmitting through the use of color. We could transmit their pain, their sense of liberty and the feeling of being in their position. What we wanted to achieve was if the character were to be cold or warm, that the audience were to feel it too. We wanted to capture all of the actor’s feelings.

Rodriguez: Everything helps me to construct images. We took as a reference the bucolic state of the coast of Colombia, where the swamp has houses built on stilts, which is can be seen as a sign of humility. Other influences were Nestor Almendros’ Days of Heaven, with his use of natural cinematography, and The Hot Spot, with its handling of color in emotions. In reality everything helped our image, for this film it was important to understand what Alberto’s disease was, in order to aesthetically be able to identify it.

Rodriguez: Well, everything was a challenge because we were on location at “la Ciénaga Grande de Tasajera” (The Grand Swamp of Tasajera), on the caribbean coast of Colombia, where the house was built specially for the movie and we had to travel eight minutes on a canoe and carry the camera, lights and other equipment. It was also rainy during October in that area, so we never knew when there would be sun or when there was a storm coming. We would set up lights, and right as we would begin to film we had to check if they needed to be adjusted or not.

I remember the most difficult scene was one where the camera was not in a safe place and a storm started. Carlos Torres, who worked on the camera with me, and Javier Gonzales, who was doing lighting, were there. The wind almost caused them to fall, camera and all! I had to close my eyes while they got the camera down and nearly dragged themselves in our direction. We had to get on the canoe and rush back to land. The situation was quite scary since it was the only camera we had and we couldn’t afford another one. Fortunately, nothing happened to it.

Rodriguez: We used a Red Scarlet camera with an MX Sensor. We used this camera because it worked very well for the conditions we were working in, and the dynamic range was optimal for the look we wanted. Also because it was very lightweight and easy to carry around. The 3D Raw format the camera generates works really well in post-production. Additionally we were in a set built especially for the movie which was no bigger than 50 M2, and we needed to set everything up there. We also used a GoPro Hero 3 for some areal shots. For the dreams, we used a Canon DSLR 5D Mark III.

Rodriguez: We had the opportunity to use the Arri Ultra Prime, which are great lenses and we had the fortune to have access to them. For the dream scenes we used the Canon 24-105 4L.

Rodriguez: Given our location, lighting techniques were mixed. We combined natural light with the light of the HMI 1.2 set, which became our sun. Since as we started filming the sun was behind us so we had to reverse the lighting set up. In other scenes we used a Kino Flo 1.2. taking into account from the start of filming that our lighting techniques would always be mixed. We made the night scenes “American nights” in which we always used a 60w Tungsten light bulb, to convey the fragile state of Alberto’s condition.

Rodriguez: There are two scenes in particular, the first one was when Rosa is at the cemetery, since it was late in the evening the sun was going down. It wasn’t a scene we could repeat since the shot list and our schedule did not allow enough time. We started rolling and it got dark within five minutes, but we ended up being able to shoot it.

The other scene was when Alberto is leaving his house to see the ocean, since in this scene the lead actress, Vicky Hernandez, had just had spine surgery and couldn’t really move much. She tried to get into the canoe to the best of her ability, it started to get dark but we got the shot. It was a single shot, as directors would say.

Rodriguez: The entire movie is real, which means we didn’t use any VFX during when finishing the movie. All of the color processing was done from scratch. During the “American nights” we had a more thorough process in which we removed the red tones from the light source in order to make it look like the only light source in the scene, much like Rembrandt did in his paintings. For the dream scenes, we were able to transgress the original color from the shots filmed with the Canon 5D Mark III, in order to generate a break in reality. The Red Scarlet camera came with a LUT setting which was predetermined during the camera tests, having this as a base in the color editing sessions, we decided to keep that color and enhance it in some scenes.