“We Got Attacked by the Taliban”: Pieter-Jan De Pue on Sundance Doc The Land of the Enlightened 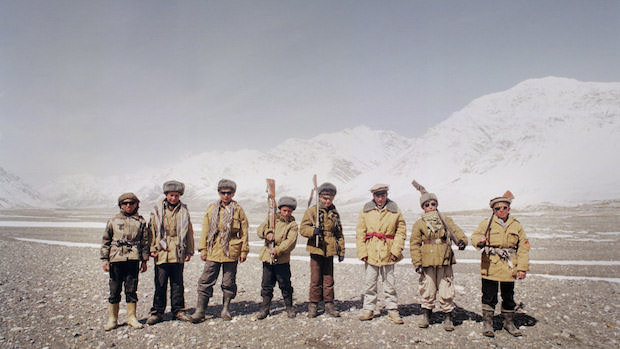 The Land of the Enlightened

Belgian filmmaker and photographer Pieter-Jan De Pue makes his feature film and Sundance debut with The Land of the Enlightened. Shot over five years in Afghanistan, the documentary tracks a group of Kuchi children who unearth old Soviet land mines and sell them to child workers at a nearby mine. De Pue shot, edited and directed the film. Below, he shares stories of a dramatic, at times violent production that placed him and his crew in the Taliban’s crosshairs. The Land of the Enlightened had its world premiere at Sundance 2016 in the World Cinema Documentary Competition.

De Pue: I have been making images for a long time. During film school, I was taking cinematography classes while I studied film directing. Many people have been confusing me as a DP, even during film school. During school I was also working in a photo lab and shot most of my graduate project O myself.

De Pue: Afghanistan is a very dramatic country – rough, with very proud people and impressive landscapes. I wanted to transform the landscapes in a way, make them a kind of a second “character,” besides the children and US soldiers featured in the film. We tried to shoot in a very aesthetic way, sometimes static, sometimes with the idea it had to become something timeless. For example, the caravans that have been passing for thousands of years over the Silk Road had to be filmed in such an artistic way; nothing has changed since the Middle Ages. We wanted to tell the dreams of Afghan children so we were obliged to work in a very fictional way, with effects such as time lapses and high speed shots to create this fictional/dreamy quality even more. But on the other side, we wanted to create a very heavy contrast with the war: many handheld, very rough and nervous hand-held camera shots.

De Pue: I have been experimenting a lot by myself, not really referencing other cinematography or photography. But if there is a film I’m drawn to maybe it’s Koyaanisqatsi. The concept of “time” was an important aspect for me to include in my film, which has worked out very well with the many time lapses. Apocalypse Now has been really inspiring to me, but more due the fact that it was such difficult shoot and because of the swamp the production got into, which on some levels became very similar to what we faced at a number of points in Afghanistan.

De Pue: Afghanistan in general! Everything is complicated in the country. There was a lack of security, rough landscapes and a lack of roads so everything needed to be transported by donkeys, horses, camels and portars to the locations where we wanted to film. The altitude was also very challenging, there was little good food, warm places to sleep, and fuel and generators broke down so we had to continue shooting with Bolex cameras with spring mechanisms because the batteries for the Arri were empty. The extreme cold made the batteries drain even more so we had to put them in our underwear to avoid having to charge them more. We got attacked by Taliban and the crew needed to be evacuated, we were thrown in jail three times, the Afghan crew got heavily injured and was forced to destroy all the cinema gear at gunpoint because they were working for “infidels,” etc, etc. You name it!

De Pue: We had four cameras in the beginning of the shoot: an Arri SRIII HS, Aaton A-Minima, Bolex SBM (S16) and Photosonics 1VN (crash camera). We used the complete set of 9 x Arri Zeis Ultra 16 lenses, which we used on all the cameras with different PL mounts and adaptors. However, after the Taliban attack, the insurors did not want to cover any European crew any more so I had to take the lead and train an Afghan crew to work with this unfamiliar camera gear. We had to reduce the equipment to two main cameras: the Arri SRIII (main) and the Bolex SBM (for time lapses). The S16 format seemed for me the best format to capture the rough reality in Afghanistan, also the very hard life of the kids, the war. But the very organic look of film fit incredibly well with the light, the dust and the dramatic landscapes. A second reason why we used film was because of the electricity situation: there was no way we had enough electricity to charge batteries for computers, hard drives, digital cameras, etc… We even left the video assist of the Arri SRIII behind because it was taking too much power. Since I was shooting alone, there was no way to focus on this as well.

De Pue: We did not use much light, again due to the very difficult electricity supplies. It was only in a gemstone mine that we used very few light (halogen spots), but mainly we worked with gas lights, oil lamps and campfires, which we used as the main source of light. The characters always had to be close to a light source. But seeing the daily life of them in caves, yurts, tents, graves and other kind of stupas, it seemed very close to reality.

De Pue: We shot the final scene of the film with many horses in the middle of Kabul. They needed to gallop all together towards the ruins of the destroyed royal palace in the center of the city, in the middle of the traffic. We shot this scene in hi speed, but there was no way to have a special trailer for mounting the camera. So I had to hang out the back of our Land Cruiser while the horses where galloping in front of me over the boulevards, through the traffic, inside the palace. We needed to do many takes, also from the roof, the front of the car, etc… So an assistant had to grab me by my belt so I wouldn’t to fall out of the car as the horses and/or cars came dangerously close by. At one point a horse hit almost the driving car and came with his legs so close that he almost jumped over me, but it became an amazing shot. There were many challenges for other scenes as well. For example, the organizing caravans of 45 horses and camels, who had to meet another caravan of the same amount of animals, crossing each other in a valley. The coordination had to be perfect, because we knew we only could do this once in many instances.

De Pue: Not very much I think. We did grading in a very colorful way for the world of the children versus a very pale and contrasty look for the war with the US and the Taliban. But we left a lot of flares, dust, scratches and dirt on the film during the scan. I did not want to have a too-clean look for the film. Again, everything needed to have something rough and hard, but aesthetic and beautiful.