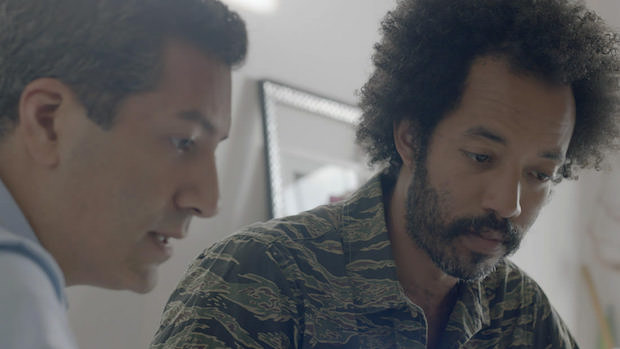 Jacqueline (Argentine) marks the debut feature film from both director Bernardo Britto and DP Eric Yue. Starring former Daily Show correspondent Wyatt Cenac, the film unfolds as an playful blend of mockumentary and political thriller. Below, Filmmaker speaks with Yue about what he calls the film’s “documentary/stylized” aesthetic. The film premiered in the NEXT program at the 2016 Sundance Film Festival.

Yue: I was approached by Bernardo and the producers who are friends of mine from college. The crew that made this film have been close for around 10 years now, so being in this orbit allowed for a smooth collaboration between myself, the director, the actors and crew.

Yue: A portion of the film had been shot by the director himself over the course of a few visits to Argentina, so a lot of the approach was to match the language he established and remain invisible. The fictional story involves a director making a documentary so the footage is intended to feel rough and spontaneous. There are even times when I allowed the lead actor Wyatt Cenac to operate the camera to the give the effect that he is truly the author of this footage. There are also sections that abandon the POV aesthetic and feature a more stylized approach as if we are watching a reenactment of an event or a commercial. This interplay of visual language allowed the camera to become a character of its own, assimilating and taking other forms of media grammar.

Yue: Shooting this film was like putting together a puzzle; each shot was crafted to fit in a specific timed sequence. The camerawork became very gestural and punctual, where a whip-pan was used for a comedic beat or heightened emphasis. Bernardo and I kept referencing Goodfellas in our talks because of its documentary/stylized editing to suggest its subjectivity, and emphasis on the protagonist as both the author and subject of the film.

Yue: Like any independent production, the budget limits the locations you shoot in and the amount of crew you have. There was a day where we had to sneak into a fairly expensive Manhattan hotel to shoot a scene. You can’t really announce that you are filming in these conditions, so the amount of help and equipment that gets brought in is limited.

Yue: The film is shot on a number of cameras for it’s immediacy and seemingly DIY approach. If I can remember, the cameras used were: Arri Amira, C100, Canon 7D, Canon 60D, iPhone 6, HPX-170, GoPro, and more. The Amira footage was shot using rehoused Super Baltar lenses to cut the digital crispness just a little bit. There is a scene at the end which needed to feel the most cinematic and emotional, so I used these lenses to exploit their tendency to flare and bloom when light hits it from a 45 degree angle. We shot some fake news footage using the HPX170, which was then degraded to make it seem as if it were ripped off of YouTube. My goal was to give these segments a look that could actually trick an audience into thinking the footage came from the internet, yet adding to the collage-like, maximal aesthetic of the film.

Yue: It’s like oil painting to me; practical light is the underpainting and I work from this to bring out or hide certain elements. Sometimes subjects need to be descriptive and other times closer to abstraction. The role of the DP is to interpret where on this scale the audience should be placed. For Jacqueline, the majority of the lighting is descriptive and natural with the emphasis of the cinematography being placed on camera movement and gestures.